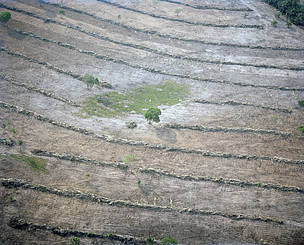 Deforestation in the headwaters area
© Mustafah Abdulaziz/ WWF-Brasil
The Pantanal is the largest wetlandon our planet. With 170.000 km2, it sprawls over areas of Brazil, Bolivia and Paraguay. Its green forests, the diversity of its birds, fish, and its flooded fields make a picture postcard setting, but its beauty and grandeur is at risk. Deforestation, the lack of basic sanitation in the surrounding cities and rural areas, and poor farming practices threaten its over four thousand registered animal and plant species, and especially, to its water springs, lakes and rivers. With these threats in mind, since 2012, WWF Brazil has been implementing several actions to conserve freshwater resources in the Pantanal’s headwaters, these sources  flood the region’s plains. Currently, 70 springs that feed the Jauru, Sepotuba, Cabaçal and Upper Paraguay rivers in Mato Grosso are undergoing restoration.

In the words of Júlio César Sampaio, WWF Brazil’s Cerrado Pantanal Programme Coordinator , “Recovering freshwater springs is not only about acting where these springs are located. It means conserving an entire hydrological chain and an entire ecosystem such as the Pantanal, with its over four thousand registered animal and plant species”.

According to figures from Brazil’s Ministry of the Environment, by 2009, the Pantanal lost 23,160 km2 of native vegetation, representing 15% of its total area. The headwaters are the source of the freshwater that feeds the Pantanal’s hydrological cycle, and is at risk. A study by WWF Brazil showed that the levels of turbidity  (the decrease in water transparency) and sedimentation (solid particles in the water) have increased in the Jauru, Sepotuba and Upper Paraguay rivers. Without the native vegetation, rivers are left unprotected and exposed to rains that carry sediment loads downstream and produce an increase in turbidity and silting levels. Due to this process, these rivers become increasingly shallow. Turbidity affects the life cycle of fish species, due to the water’s lack of transparency, and also encumbers the treatment of the water distributed to the population by sanitation companies.

Silting also hampers navigation, the flow of water and the migration of fish species, besides rendering rivers vulnerable to flooding in rainy seasons. The destruction of native vegetation can have an even more serious effect; it can completely dry up springs. The absence of a treatment system leads to human waste being directly dumped into the rivers and streams, and contaminates the water, soil and water tables. A study by the Trata Brasil Institute and WWF-Brazil identified that less than 10% of the region’s sewage is treated.

What WWF-Brazil has done to protect the Pantanal’s rivers and springs
The recovery of 70 freshwater springs is part of the Pact in Defense of the Pantanal’s Headwaters, a movement created by WWF to preserve rivers and recover springs, which currently convenes over 47 institutions (among them, city councils, local governments, the State Government of Mato Grosso, private companies and NGOs). Other positive results from the Pact are: 20 families benefiting from the installation of bio-septic tanks (which, besides solving the lack of basic sanitation, limits the spread of disease and the contamination of water in springs, streams and aquifers); 76 small properties are ready to receive Payments for Environmental Services (PES); three forest nurseries are in progress; capacity-building courses for rural producers; and the establishment of municipal laws that create PES practices in Mirassol d’Oeste and Tangará da Serra, in Mato Grosso.