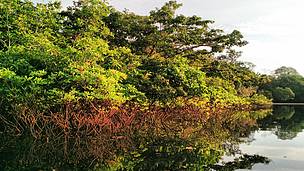 All of these areas are located in the Madeira River basin , in the southern Amazon. They were established due from studies funded by the Amazon Protected Areas Program (ARPA) – a Brazilian government initiative supported technically and financially by WWF for more than a decade.

The Amana National Forest, in Maués, has had its area increased and now it has 141,337 hectares.

The decrees brought the reasons of why the creation of these areas was necessary. Some of the arguments given by the Brazilian Government for the creation of the areas are: to protect the biological diversity of that region; to support the environmental stability in the south of the Amazon; to develop recreational activities (contact with nature and ecotourism, for example); and to promote the sustainable use of forest resources.

Protect several rivers - such as Manipur, Manicorezinho, Jatuarana, Acari, Camaiú, Sucundurí - is also one of the objectives of these new protected areas.

Acarí National Park has registered, inside its territory, endangered species and abundant wildlife  with over 150 species of mammals and 600 of birds. In the last decade, 3 new species of primates and 2 new kinds of birds have been  discovered there.

On the other hand, Campos de Manicoré Environmental Protection Area was created to help ordering the construction of a roadway which will link the city of Manicoré to the Santo Antonio of Matupí district - a very famous place in Amazonas because of logging.

The Conservation Director of WWF-Brazil, Mário Barroso, celebrated the creation of the new areas. “Creating protected areas is one of the most effective strategies to protect and promote the conservation of biodiversity. So, we welcome the action of the Brazilian Government and found this decision very interesting and important”, he said.