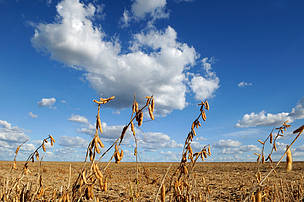 The moratorium is an initiative coordinated by the productive sector, the government and NGOs like the Greenpeace, the Institute of Environmental Research of the Amazon, and WWF-Brasil that participate since its early stages.
© Adriano Gambarini/WWF-Brasil
On the eve of its 10th anniversary, the Soybean Moratorium has just been renewed. For the first time, the pact between productive sector, government and the civil society, which is aimed at preventing the sale of soybean from deforested areas in the Amazon region, is signed without a defined date of expiration. Up to these days, the agreement was renewed on an annual basis. The renewal was announced today in Brasilia, during a solemnity at the Ministry of Environment (MMA, in Portuguese).

The moratorium is an initiative coordinated by the productive sector, the government and NGOs like the Greenpeace, the Institute of Environmental Research of the Amazon, and WWF-Brasil that participate since its early stages. It came up as a response to the questioning by environmental groups and the international market concerned about the impact of soybean expansion over the Amazon forest.

The agreement came into force in July 2006, when the Brazilian Association of Vegetal Oils Industries (Abiove, in Portuguese) and the Brazilian Association of Cereals Exporters (Anec, in Portuguese) undertook, through an agreement signed by representatives of all the sectors involved, not to trade or fund the soybean grown in areas that had been deforested in the Amazon biome from 2008 onwards.

All that to clean the soybean production chain from the footprint of deforestation, a condition for the Brazilian soybean - the main agricultural commodity for exports - to keep on having access to the most demanding international markets.

Since then, all parties of the agreement publicly took on commitments and adhered to goals; the compliance to these commitments and goals is monitored based on satellite images, in a participatory way and monitored by the civil society. Although having different interests, all the segments engaged in the moratorium endeavor to show that the initiative bears good fruits.

The historical monitoring series evidences that in the last decade less than one percent of all the soybeans grown in the Amazon region had origin in deforested areas, despite the increase in production. In the 2014/2015 harvest the soybean index external to the agreement was 0.84%, equivalent to 28.7 thousand hectares of the grain, according to the consultancy firm that coordinates the satellite data analyses.

However, the moratorium goes beyond deforestation, because it protects all kinds of ecosystems in the Amazonian biome (cultivated plains, leans, savannahs) and is an agreement of zero conversion of native ecosystems. The results achieved with the moratorium fostered huge international soybean-consuming corporations to support the Brazilian initiative, among which McDonald’s and European retailers like Tesco and Carrefour.

“The Brazilian experience with the moratorium led the market to assimilate criteria to put an end to deforestation in the soybean production chain, evidencing  that gathering food production and environmental conservation is possible”, said the Environment Minister, Izabella Teixeira, when she announced the new moratorium format.

According to the WWF-Brasil Executive Secretary, Carlos Nomoto, the moratorium is an excellent example of how the productive sector, governments and NGOs can work together, generating economies allied to environmental conservation. “We will continue to support the initiative that is consolidated as a successful case for Brazil and the world”, he added.

Road Map
The terms of the agreement signed today provide for the continuity of several commitments by all the sectors engaged, including the monitoring of municipalities with more than five thousand hectares of planted area in the Amazonian biome. The moratorium renewal - now for undefined duration - is an acknowledgment of the importance and achievements of the initiative.

The decision can promote the strategic repositioning of this initiative as a model to other countries. That is so because the global scenario is increasingly seeking for mechanisms to implement and monitor zero deforestation commitments by governments and corporations.

One of the examples is the Cargill - a giant in the commodities and food sector - that signed the New York Declaration on Forests committing with the exclusion of deforestation in its supply chains from 2020 onwards.

During the solemnity of signature of the new moratorium agreement the Abiove Chairperson, Carlo Lovatelli, said that “the expectation is that in the future the moratorium comes to be replaced by a CAR-base monitoring system, similar to the one that will be implemented to award agricultural credit from May 2017 onwards”.  The financial institutions are mandated to require the CAR to award agricultural credit, as provided for in the Forestry Code. However, vegetal oil industries can voluntarily adopt the same criterion.

The Soybean Work Group (GTS, in Portuguese) manages the moratorium and works on a kind of “Road Map” to expand the agreement scope by including, for example, the debate about economic incentives to farmers committed with zero deforestation.

“One of the challenges posed to the GTS is to develop a mechanism similar to the soybean moratorium in the Amazon to the Cerrado - the biome with less legal protection - that has suffered high conversion rates in the last decade”, emphasized Edegar de Oliveira Rosa, coordinator of the WWF-Brasil Agriculture and Environment Programme.

The moratorium is an initiative coordinated by the productive sector, the government and NGOs like the Greenpeace, the Institute of Environmental Research of the Amazon, and WWF-Brasil that participate since its early stages.
© Adriano Gambarini/WWF-Brasil Enlarge 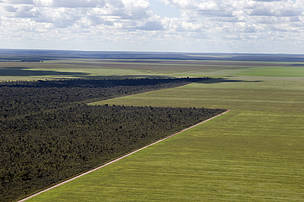 The moratorium came up as a response to the questioning by environmental groups and the international market concerned about the impact of soybean expansion over the Amazon forest.
© Adriano Gambarini/WWF-Brasil Enlarge
Gostou deste artigo?