Brazil and France must act against illegal gold mining


Brasília (DF) – The ratification of an agreement between Brazil and France at the end of 2013 means that the two countries will act together in the fight against illegal gold mining in a 150 kilometer strip along the two sides of the border between French Guiana and the State of Amapá in Brazil (see map). The approval of the pact by the Chamber of Deputies and the Senate comes five years after it was introduced, thanks to the visit of the French President François Hollande to Brazil.

According to the agreement, “illegal gold extraction is a threat to the preservation of the natural heritage of the Guiana Shield and a risk for the health and safety of the local population that depends on the forest for their livelihoods”. This is why the countries “have committed to implement a comprehensive system of internal regulations and control of search and mining activities in protected zones or areas with natural heritage interest”.

The pact provides for “the implementation of the necessary measures to combat all illegal gold ore extraction and trading activities and all activities related to the unauthorized transport, storage, sale or conveyance of mercury” and “the confiscation, and ultimate destruction, of goods, material and equipment used in illegal gold extraction”. The list below shows the protected areas and indigenous lands in the region covered by the agreement.

Jean Timmers, Director of Public Policy at WWF-Brazil, points out that “the block of forest of the Guiana Shield region is extremely important from an ecological standpoint because it connects protected areas in the northwest of the State of Pará to protected areas outside Brazil forming a mosaic of interconnected conservation covering an area of over 29.6m acres, the largest tract of preserved tropical forest on the planet".

Timmers also stresses: "Although mining in the State of Amapá is seen by some as important from a socioeconomic point of view, it in fact causes significant harm to workers due to the terrible working conditions, not to mention the serious negative impacts on the protected areas and local communities”.

The Brazil-France agreement to ban illegal gold exploration was signed in 2008, by the then presidents Luiz Inácio Lula da Silva and Nicolas Sarkozy, after the launch of the construction of the bridge connecting the two countries over the River Oiapoque. However, the delay in ratifying the agreement, partly affected by members of parliament linked to illegal mining, led to an increase in environmental degradation and social problems and violence in the region. It is estimated that more than 20,000 Brazilians works in clandestine mines in French Guiana.

Two French soldiers, a corporal aged 32 years and cadet aged 29 years, were killed, and two French police injured, in June 2012, during the mission Operation Harpy (Operação Harpia) involving clandestine gold mines in the region. In April of the same year, around 100 Brazilian miners were arrested in French Guiana, while in 2010, 1,500 foreigners in an irregular situation were also arrested. On 24 June last year, a Brazilian boatman, allegedly transporting smuggled goods to a mine, was killed by French policemen in Guiana.

Apart from violence, illegal gold mining involves the use of liquid mercury to separate the gold from surrounding material. This substance, which is highly toxic to human health, is released into the environment and is absorbed by fish and other links in the food chain. Clandestine mines use up to a kilogram of mercury for every kilogram of gold produced and the WWF network estimate that 30 metric tons of mercury are released into Guiana’s environment, including protected areas and indigenous lands, every year.

The gold rush gained a boost due to a sharp increase in the price of the metal in the international market after the financial crisis in 2008 and due to increased demand for jewelry in emerging market economies such as India.

In October last year, around 140 countries, including Brazil, approved the final text of the Minamata Convention that proposes banning the use of the heavy metal by 2020. The treaty was adopted after four years of negotiations and establishes measures to control and reduce the use and production of the substance which is used in various products and industrial processes. The convention will come into force when 50 signatory countries have ratified it.

According to Jean Timmers: "We defend and promote a peaceful solution that provides alternative and sustainable forms of employment and income generation for people currently involved in illegal mining. The region has a huge potential for tourism, especially now with the inauguration of the bridge between Brazil and French Guiana, together, for example, with the possibility of forest concessions and management of wood and non-wood forest products". 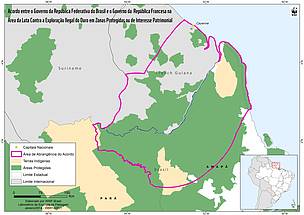 In pink, the area covered by the Brazil-France Agreement
© LEP / WWF-Brasil

In pink, the area covered by the Brazil-France Agreement
© LEP / WWF-Brasil