“The floating base strengthens our conservation efforts In Juruena”, states ICMBio’s president 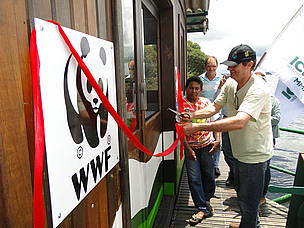 Roberto Vinzentin, president of ICMBio, during the ribbon-cutting act in the opening of the floating base
© WWF-Brasil / Jorge Eduardo Dantas
Apuí (AM) - “Four members of our community were hired to work on the surveillance of the floating base, so this facility is generating income for those people and it is already helping us in some way.  I hope this facility will bring further help, driving doctors and teachers to come over here more often”.

Those words were said by Antônio Fábio Fernandes, a 47 year old riparian who is called “Juruna”, during the opening of the floating facility in the Juruena National Park, in the region between Amazonas and Mato Grosso states. The event took place on March 27 and was organized by WWF-Brazil, together with the Brazilian federal agency in charge of biodiversity conservation and protected areas, ICMBio (Portuguese acronym for Instituto Chico Mendes de Conservação da Biodiversidade).
The opening event lasted throughout the afternoon and included a symbolical inauguration with the ribbon-cutting ceremony; a meeting with the members of Barra do São Miguel community, which is the riparian community closest to that area; and a visit to the adjacent protected areas, such as the Bararati Sustainable Development Reserve, in Amazonas state.
The base is already operational
Although it was only recently officially inaugurated, the floating base is operational since the past year.  This facility is a support instrument for patrolling and protection actions in the Juruena National Park, and it will also be used as a research base for the researchers willing to develop scientific work in the area.
The floating base is 14 meters long and 6 meters wide. It is composed of 11 rooms and can support up to 20 metric tons of weight.  The facility includes bedroom accommodations for eight people, a kitchen, a communications and meeting room, two bathrooms, and a laundry room.
The base structure is set up to decrease its environmental impact.  It includes a solar energy system and a sewage treatment plant.  The floating facility can be ‘towed’ along in the Juruena National Park.  The total cost of the floating base was slightly over R$ 580,000 BRL, funded by WWF-Brazil – the organization paid an outsourced company to build and equip the floating facility.
Promoting conservation
The inauguration event started at Barra São Manoel, the river inlet.  A small, dirt strip for landing and takeoff was used by the single-engine airplanes bringing the guests from other states.
During the event, ICMBio’s president, Roberto Vinzentin, said that the inauguration of the floating base was a way for the public powers to increase its presence in the area. “We are reinforcing our goals of promoting conservation in this isolated area in the Amazon, besides reaffirming our goal of coming closer to local communities.  We are willing to work together with them and help them to improve their living”, stated Vinzentin.
Support to social and environmental development
Juruena National Park manager, Lourdes Iarema, said that the floating base will help the participatory management of this protected area.  “This base means an important achievement for biodiversity conservation, for it will provide the conditions for integrating ICMBio’s actions with the actions by the communities and other organizations working here”, she said.
Lourdes Iarema, who is an environmental analyst, said this floating base will be vital to carry out other activities such as scientific research, and that the equipment will help protect the natural heritage and the social and environmental development in the region.
WWF-Brazil’s conservation director, Mauro Armelin, recalled that the idea of building a floating base came up two years ago and that the proposal required several conversations and a lot of articulation with ICMBio.  The process demanded quite a lot from both organizations.  “I am moved to say that this inauguration is the top symbolical event I have ever taken part in”, he said, amidst laughters.
Meeting with community members
Mauro Armelin emphasized the joint work done by WWF-Brazil and ICMBio.  He stated that WWF-Brazil believes in constructive partnerships and that joint work includes sharing responsibilities and merits.
The second moment in the inauguration event was the meeting at Barra de São Manoel community center.  Profiting from the presence of ICMBIo and its technical staff, the community delivered them a letter of requests.  The document asked for help to promote conservation in the area and to improve health and education, among other vital services.
Besides the president of ICMBio and the conservation director of WWF-Brazil, the inauguration event had the participation of members of the technical staff from both organizations; members of Barra de São Manoel community; the Apuí vice-mayor,  Delmar Hister; members of the City Council; and members of the technical staff of the Amazonas state Sustainable Development Office (SDS-AM).
According to community members, Barra de São Manoel community dates from 1901.  It was created by the migratory flows in the Amazon region during the rubber cycle, in the early past century.  The community is now composed of 60 families and totals nearly 400 people.  It is located in Apuí municipal district, in Amazonas state.  Yet due to the fact that the community is quite far from town, it is also assisted by Jacareacanga, a town located in the southwest part of Pará state.

Pics of the event can be seen here.

Roberto Vinzentin, president of ICMBio, during the ribbon-cutting act in the opening of the floating base
© WWF-Brasil / Jorge Eduardo Dantas Enlarge 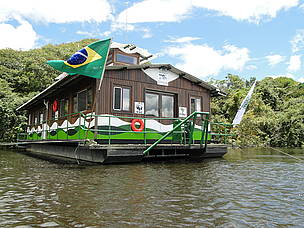 The structure will be used for monitoring operations, and to facilitate the conduct of scientific research in the region
© WWF-Brasil / Jorge Eduardo Dantas Enlarge 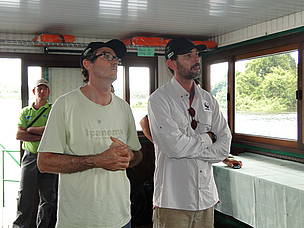