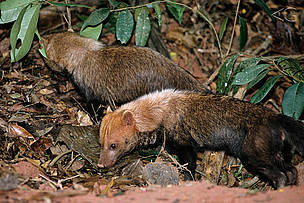 The bush dog can be found on the Cerrado, Atlantic Rainforest and the Amazon
© Adriano Gambarini / gambarini.com.br
by Aldem Bourscheit / WWF-Brazil


Brasília (DF), Brazil – Acting very withdrawn and showing habits which are practically unknown by science, the bush dog (Speothos venaticus) - also called vinegar dog, or savannah dog – is referred as a ‘ghost’ by researchers. This species was described in 1842 by the Danish researcher Peter Lund, considered to be the father of Brazilian paleontology. Since then, the latest official recordings, made in Minas Gerais state, were from the bush dog tracks and two dead animals.

Last week, images of a living specimen of the bush dog were recorded in the Veredas do Peruaçu State Park, in the northern part of Minas Gerais state. This was achieved through ‘photo traps’ set up, made possible by a partnership between WWF-Brazil and the Biotropicos Institute.

“We were trying to record this species in this region for seven years now. I simply could not believe it when I saw the images”, says biologist Guilherme Ferreira, from Biotrópicos, celebrating the achievement.

The bush dog features dark brown fur, an elongated body measuring up to 70 cm long, short paws and ears, and weighs approximately 5 kilograms. This animal’s urine has a strong vinegar smell and that explains why it is also known as ‘vinegar dog’. This species is found in the Cerrado, the Atlantic Forest and the Amazon biomes in Brazil. It is one of the smallest and most social animals from the Canidae family in South America, living in permanent packs composed of up to ten bush dogs.

“The pack allows the group to hunt large preys. This behavior is not observed in other species, such as the maned wolf, the pampas fox (also Azaras fox) or the hoary fox”, says Frederico Lemos, from Goiás Federal University.

This species is in a vulnerable situation in Brazil and it is critically threatened in Minas Gerais state. Its main enemies include deforestation, conflicts with population, attacks, and diseases transmitted by pets.

That is why it is so important to keep protected areas connected with ecological corridors, to ensure that rural properties comply with the legislation, and to take care of domestic animal health throughout the Peruaçu Valley, where the bush dog was recorded. The Peruaçu River is a tributary to the São Francisco River.

This region is part of the Sertão Veredas-Peruaçu Mosaic of Protected Areas, which occupies nearly 2 million hectares in northern Minas Gerais and southwest Bahia. According to Michael Becker, WWF-Brazil’s Conservation Director, this finding reinforces the relevance of protected areas for the Cerrado biome.

“This record (made of the bush dog) clarifies the role of the protected areas, particularly in the Cerrado, a biome with less than 3% of its area being effectively safeguarded by public powers. New international targets for biodiversity conservation call for protected areas to cover at least 17% of every terrestrial biome”, emphasized Michael Becker.

Research is strengthened – The partnership involving WWF-Brazil’s Cerrado Pantanal Programme and Biotropicos Institute is expanding scientific monitoring over medium size and large mammals in the Peruaçu Caves National Park and in the Mata Seca and Veredas do Peruaçu State Parks.

The bush dog can be found on the Cerrado, Atlantic Rainforest and the Amazon
© Adriano Gambarini / gambarini.com.br Enlarge 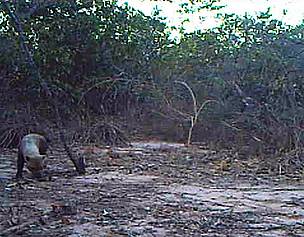