Sharp hearing: more than 250 birds identified by their calls and songs

- What is your working routine like here in the expedition?

My main tool for the fieldwork is bioacoustics; that is to say, I follow the sounds of their vocalisations. It is actually their songs and calls that enable me to identify the species that are present in the various environments. So my routine is to always wake up very early, which is when the birds are vocalising most intensely and identify the bird by its song or call, and record it.  That is why I always carry a recorder and a pair of binoculars along and I always go alone because listening and identifying means that there cannot be other noises made by people or even coming from the forest itself. If I were to go out on a sunny day for example with lots of cicadas stridulating then it would be impossible to record anything.

- Can you really identify the specimens without actually seeing them?

Over the years I have acquired experience in recognising songs and calls and that is the basis of my work. With that kind of methodology it is possible to get results very fast; in just a few days of work I have been able to register a large number of species and that is a very different situation from other areas of research where much more time is needed to obtain a similar volume of data

So bioacoustics is an excellent instrument for anyone working in dense forests and closed environments where it is very difficult to see anything. We like to say that we actually only see 10% of the birds and we hear 90% of them. Sometimes I record vocalisations and attract the birds by playing back the recording of their own song in order to confirm the identification of the species. It is not absolutely necessary to have a sound recording to identify a species but I usually do one anyway as a backup security measure. Often I record the vocalisation for the purpose of conducting a more specific consultation or sometimes just to have it available in my database.

Also there are occasions when it takes years to actually manage to identify a bird. You listen to the vocalisation, search the databases for something similar and… nothing. Then it takes years before you hear that same sound again and only then do you manage to sight and identify the bird in question.  That is something really gratifying.

Birdsong and birdcalls are associated to a certain type of behaviour. Sometimes a bird has a huge repertory that includes eight or ten different types of song or calls. One is the territorial call, another is the alarm call, there is another to establish contact with a female. Usually birds only communicate within the sphere of their own species but there are also calls emitted by some birds that various other species understand. As an example, in mixed flocks of birds there is always a leader that is capable of being understood by all the others; he belongs to the most aware group and if a predator should appear, a snake, a hawk or an owl, he lets out a cry that all the others understand.

There are also three other components that influence birdsong: the genetic component which is hereditary; the learned component whereby the bird hears and incorporates things it has heard to its repertory; and there are some species that are capable of improvising around the sounds that they already know. Some parrots for example, imitate and improvise; thrush species do the same. Within the repertory of the thrushes’ songs are those of another twenty species that they have incorporated and around which they improvise. The thrush uses the birdsongs it has learned in different sequences and every time it improvises in a different way. Another example is the Tinamous whose song is genetically determined and consequently never changes; it is written into their genetic constitution.

- What was your impression of the Serra do Pardo National Park?

There can be no doubt as to the richness of the Park’s natural environment. During the days of practical research it proved possible to identify more than 250 species. There were also species that we had never expected to find here, and that are generally considered to be Cerrado savannah species such as the pearly-vented toady-tyrant, the Cerrado ant shrike and the stripe-headed toady tyrant. Furthermore, I was able to register a species that I had already seen but never managed to record. It is a species that only sings in the twilight hours, in the last minutes of the afternoon when it is almost dark already. This has been the first time I have ever recorded it and the quality of the recording was very good.

- What has been your feeling as a researcher about participating in a scientific expedition like this one?

I really like this kind of work involving the Management Plan for a Protected Area. Firstly because it usually represents an opportunity to get to know unexplored areas where hardly anybody has been before and very few researchers have had access.  Accordingly, the chances of discovering or registering entirely new species are very high. Also living side-by-side and socialising in the field with colleagues from other fields of knowledge is really great.  We always exchange information about plants, amphibians, mammals and so on; those exchanges are very enriching for all concerned.

- How did you become an ornithologist?

I was always keen on birds but I actually discovered ornithology when I was in the fifth year of a graduate course in civil engineering. I got my Civil Engineering degree and then I took a course in administration and subsequently decided to take a degree in biology but actually, at that stage I was already working with ornithology. I have an innate ability to handle sounds and as time went by I realised that it could be an important instrument for conducting research. Actually the Faculty of Biology was an essential instrument in enabling me to view the world through the eyes of a biologist and aligning the views of a biologist with those of an engineer is highly interesting, especially in the context of environmental planning, which is essentially what the Management Plan that is to be based on the present study is all about.

WWF-Brazil’s conservation analyst Luiz Coltro was responsible for the 3rd Scientific Expedition to the Terra do Meio’s research on bird species which was carried out using capture nets. He tells us about that work as follows:

“The nets are actually a kind of trap used to capture and handle birds that live in the undergrowth and they are made of fine nylon threads with a variety of mesh sizes. They are used a as an auxiliary method  to assist biological surveys and inventories by capturing those birds that may eventually have failed to be identified by the methods of birdsong identification because they were not singing. The nets are set up at daybreak and closed at the end of the day, preferably in dark locations which the species that inhabit the depths of the forest prefer and where they can be monitored on an hourly basis. The nets are an interception trap. While it is in flight the bird cannot detect it and so it becomes enmeshed in its strands.

When the captured birds are removed from the net, they are put into cotton bags that put the bird in a comfortable position and enable it to calm down. During the expedition the nets used were 30 mm mesh and 15 different species were recorded”. 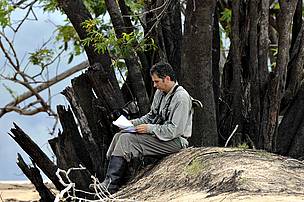 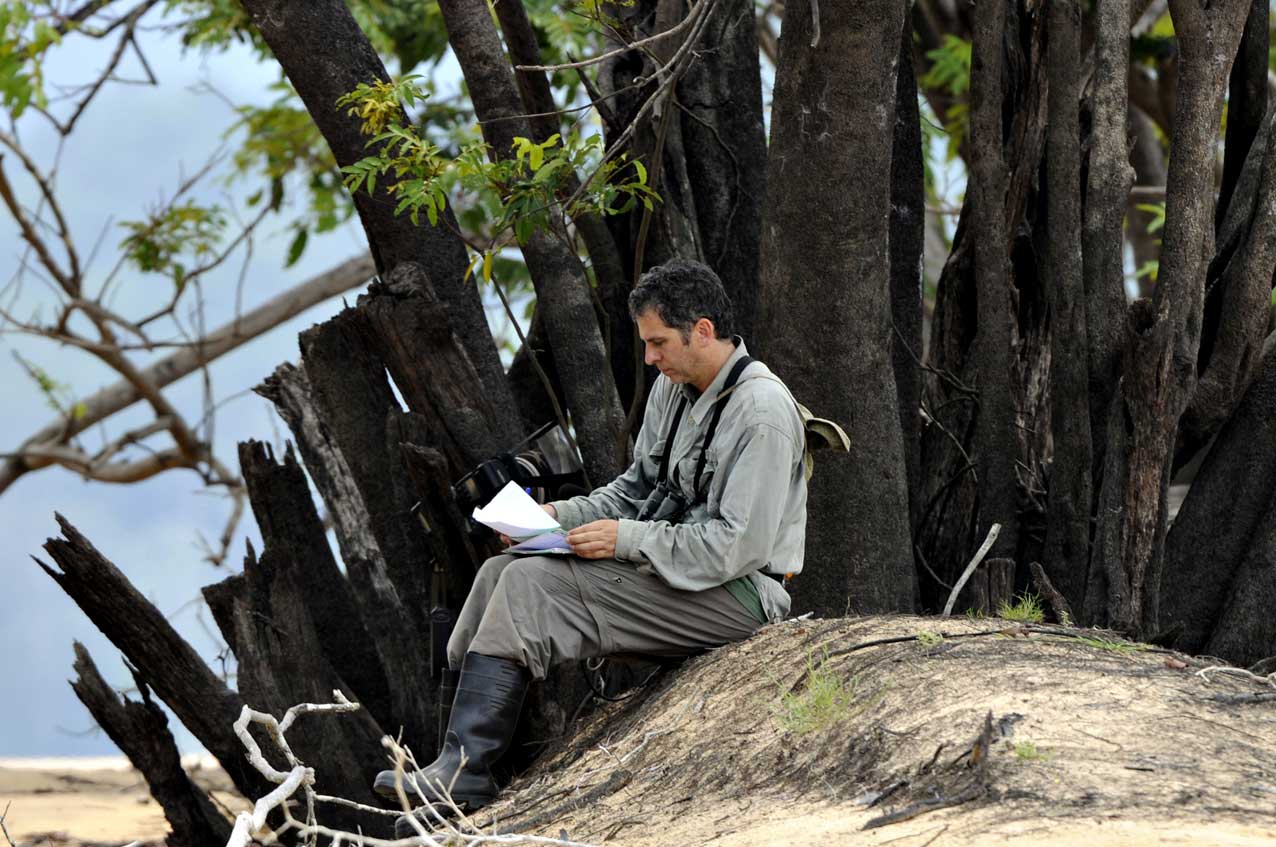 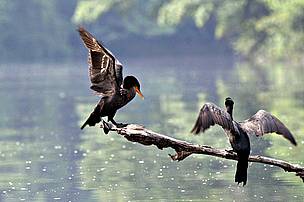 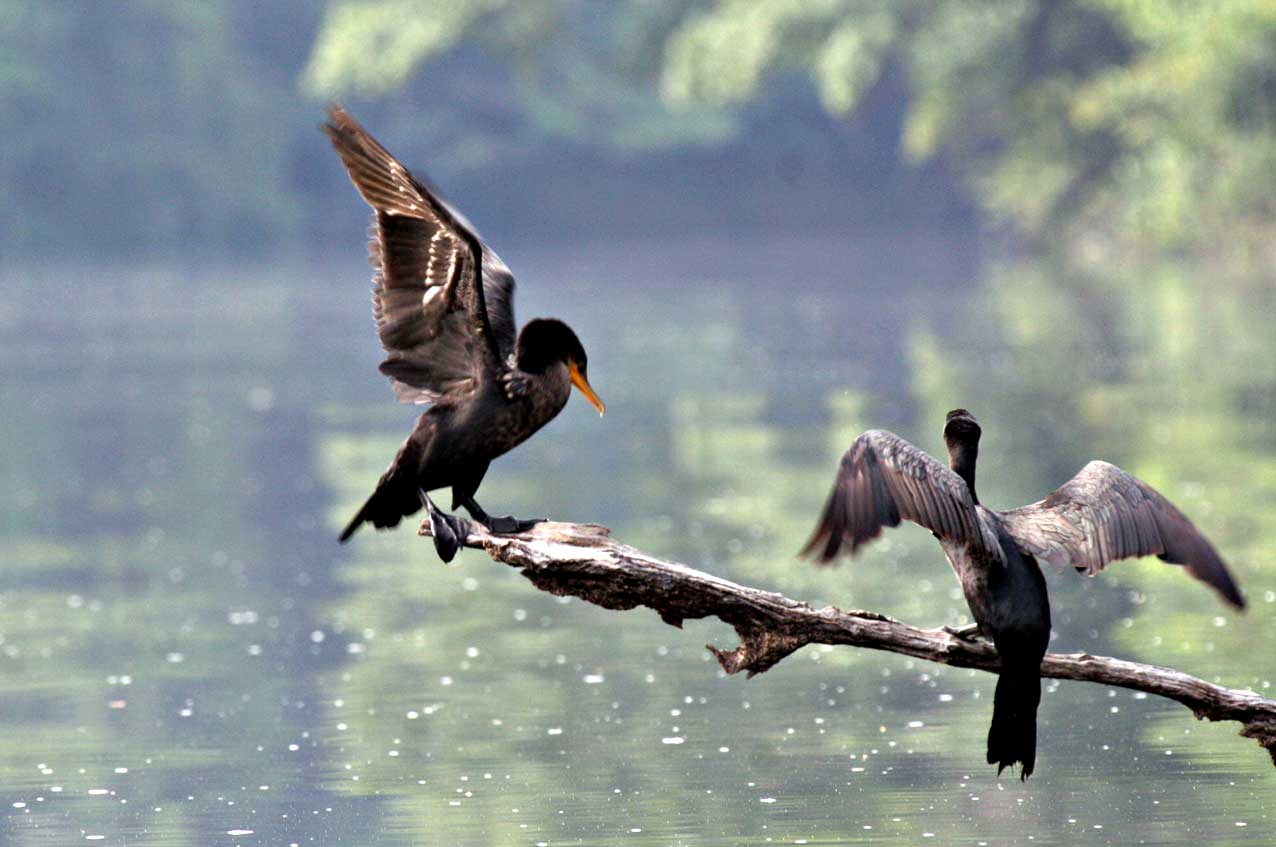 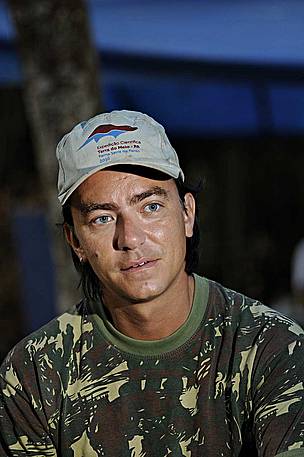 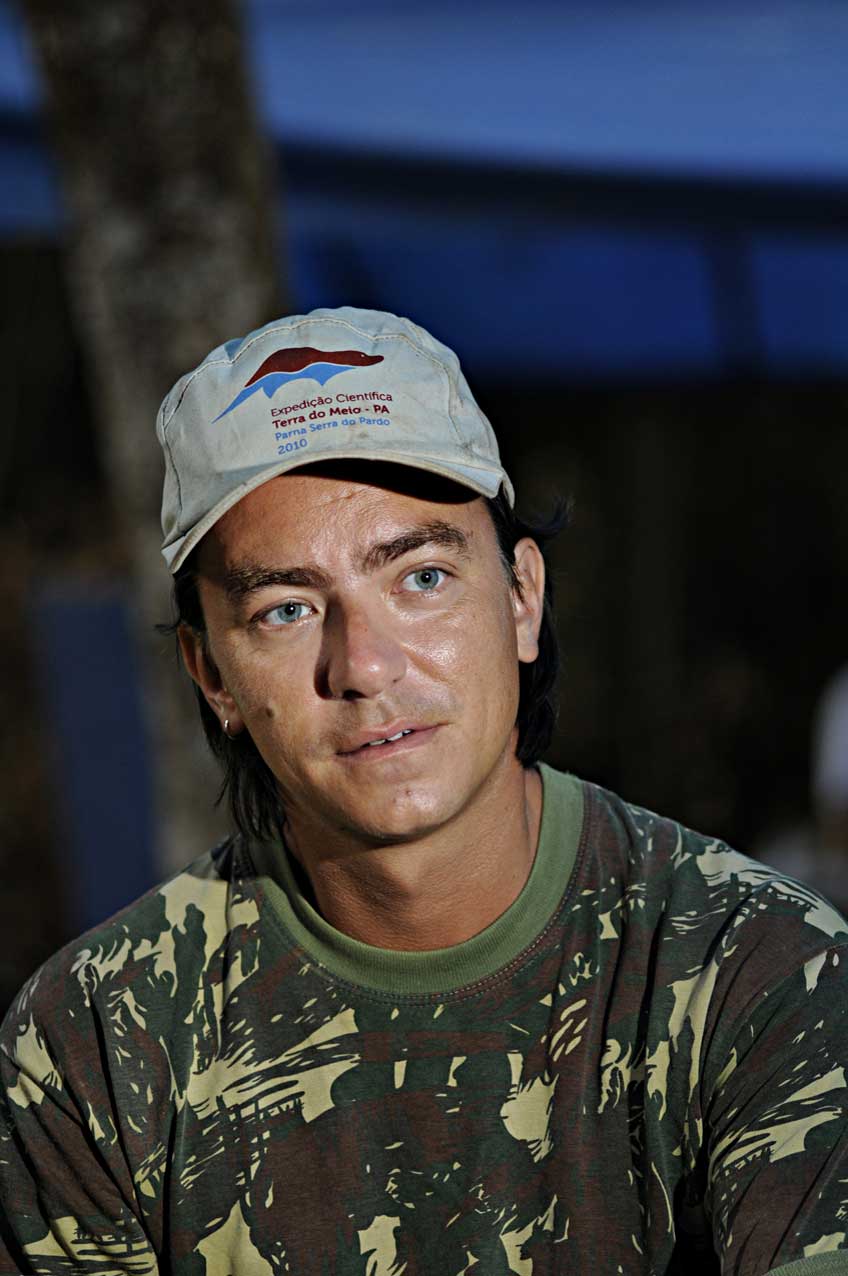 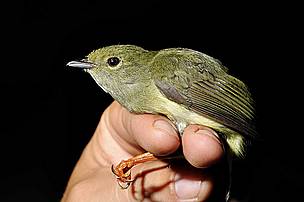 A bird classified as Manatus manatus, captured in the nets during the expedition.
© WWF-Brasil / Adriano Gambarini 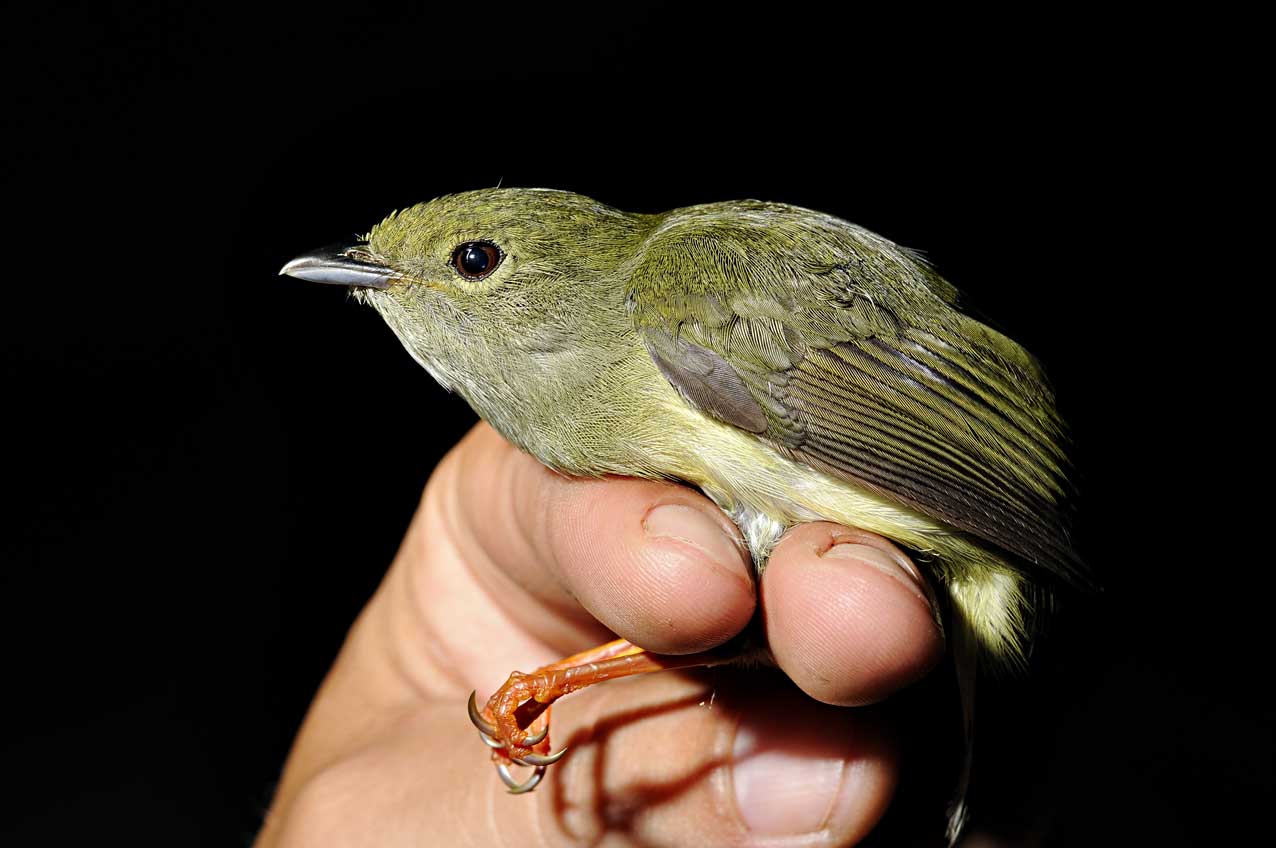 A bird classified as Manatus manatus, captured in the nets during the expedition.
© WWF-Brasil / Adriano Gambarini
DOE AGORA
DOE AGORA