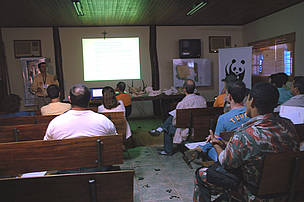 Is it possible to conciliate jaguar conservation with cattle ranching activity? To involve cattle ranchers in this conservation goals, WWF-Brazil and the NGO Pró-Carnívoros organized a meeting by the end of May, at San Francisco Farm, in the municipality of Aquidauana, in the state of Mato Grosso do Sul, Brazil. The event was attended by Pantanal’s traditional cattle ranchers, researchers, representatives from rural producers, as well as by federal and state patrolling/inspection organizations, such as the environmental police and The Brazilian Agricultural Research Corporation (Embrapa).

During the meeting, the participants got to know about the Pantaneira Jaguar Project, carried out by Instituto Pró-Carnívoros and WWF-Brazil’s Pantanal Forever Progamme The strategy of the project is to make use of scientific knowledge in order to find alternatives that can ally sustainable production and the conservation of the jaguar.

The work is carried out by the researcher Fernando Azevedo, from Pró-Carnívoros, a non-governmental organization doing research on different species of carnivores in several Brazilian biomes. Since 2003, he has been studying the behaviour and predation patterns of jaguars in the Pantanal. At first he did it in the Gadonça Project (gadonça is a contraction of the Portuguese words gado and onça, which respectively means cattle and jaguar), in the São Francisco Farm, in the municipality of Miranda; since 2007, he is working with the Pantanal Jaguar Project, in the municipality of Corumbá. Both places are located in Mato Grosso do Sul state.

In the coming years, the researcher and his team will continue to study the behaviour of spotted jaguars in the Pantanal, in order to learn how they live, which are their predation patterns and other data about that animal. The information will be used to develop management activities in the Pantanal cattle farms where such felines are found. The first part of the project was funded by the Agriculture, Nature and Food Quality Department, which is linked to The Netherlands embassy in Brazil and São Bento Farm

Information and research data on the conservation of the jaguar in the Pantanal and the ongoing projects were presented at the meeting. One interesting point raised by researcher Fernando Azevedo is that the presence of wild preys in the region - such as capybaras, deers and ant eaters - is responsible for the decrease of attacks on the cattle. “The more conserved the region is, the less the jaguar needs to feed on cattle”, Azevedo points out. The studies also demonstrated that attacks on preys out of the jungle are restricted to a distance up to 200 meters from the forest.

Participants in the meeting also had the opportunity to learn about the experience of rural producer Roberto Coelho, from São Francisco Farm, who has been taking conservation actions in his own property for some years now. Since he started to apply management techniques, Coelho was able to considerably reduce the death of cattle due to jaguar attacks.

Today his animals don’t go near the forest - especially the young calves, which are more vulnerable - and he keeps the cattle moving around the farm. He does not allow any hunting of wild animals (such as the capybara) within the farm area): “If those wild animals cease to exist, then the jaguar will certainly go after the cattle for food”, he tells us.

Besides the environmental gain, conservation also generates income for the farm - jaguar spotting is one of the main tourist attractions. “Tourists come here because they know that their chances of watching a wild jaguar is pretty good”, says the rancher.

The jaguar, a species threatened with extinction as well as a symbol of the Brazilian forests, is often perceived as a threat by the farmers, due to the cattle predation. To ease this conflict is one of the Project’s objectives, in the search for a better understanding of the various factors involved in the predation of livestock and the possible ways of decreasing such events to a minimum.

The results of this research is being used to induce cattle ranchers to find alternatives for a peaceful coexistence, in order to make it possible for the jaguar species to survive together with the development of cattle ranching, which is the main economic activity in the region. “Our concern is not to isolate the jaguar; on the contrary, we seek to ensure its coexistence with the cattle ranching activity”, says Fernando Azevedo, researcher from Pró-Carnívoros.

Information and research data on the conservation of the jaguar in the Pantanal and the ongoing projects were presented at the meeting. One interesting point raised by researcher Fernando Azevedo is that the presence of wild preys in the region - such as capybaras, deers and ant eaters - is responsible for the decrease of attacks on the cattle. “The more conserved the region is, the less the jaguar needs to feed on cattle”, Azevedo points out. The studies also demonstrated that attacks on preys out of the jungle are restricted to a distance up to 200 meters from the forest.

Since 2003, the WWF has been working with cattle ranching sector, supporting the organic beef production on the states of Mato Grosso and Mato Grosso do Sul, as a way of encouraging the adoption of best production practices in the region. The stimulus to the creation of private reserves is other strategy developed by the programme to achieve the goal which is to guarantee the maintenance of regional biodiversity and ecological process in the Pantanal basin.

The accumulated experience in the articulation with the private sector was expanded with this jaguar conservation project. The results from the research will be shared with land owners in order to propose alternatives to ensure the conservation of the animal and the economic development in the Pantanal.

Pantanal Forever Program’s conservation officer Ivens Domingos emphasizes the relevance of those partnerships. “The participation of the various actors in the meeting shows that we have a common objective, which is to work for conservation in order to establish a positive win-win relationship for both nature and the rural producer”, says Domingos.

The environment officer from Famasul (Mato Grosso do Sul Agriculture and Cattle Ranching Federation), Josiel Quintino dos Santos, praised the initiative. He thinks this is a good partnership proposal for Pantanal’s rural producers, because it seeks to identify the causes for predation and, once they are known, to propose the spotted jaguar management for conservation purposes. “This is the first time that NGOs come to us to present a conservation project which involves the rural producer. I think this is a very positive participation”, he says.

The jaguar is the biggest feline in the American continent. It can weigh up to 135 kg. It is a robust animal, with great muscular strength, and the might of its bite is considered to be the biggest among all felines in the whole world. Its normal preys are wild animals such as peccaries (both the collared peccary and the white-lipped peccary), capybaras, caimans, deers and armadillos.

Growing environmental changes caused by human development are the main threat to the jaguar population, together with deforestation and the hunting of wild prey - including jaguar hunting.

The Pantanal is the world’s largest wetland system. Its Basin encompasses an area of 624.320 km2 of which 61% is located in Brazil, 20% in Bolivia and 19% in Paraguay. This huge freshwater reservoir is important for the protection of freshwater ecosystems, the climate stabilization, land conservation, and the maintenance of its rich biodiversity. It is the home to 122 mammal species, 263 fish species, 93 reptile species, 656 bird species, 1032 butterfly species, and 1647 flowering plant species.

For this reason, WWF-Brazil elected in 1998 the Pantanal Wetland as one of its main regions to work with projects that links conservation and regional development. To guarantee the sustainability of the projects, the work is done involving local actors, aiming to establish partnerships that stimulate the adoption of good social and environmental practices.