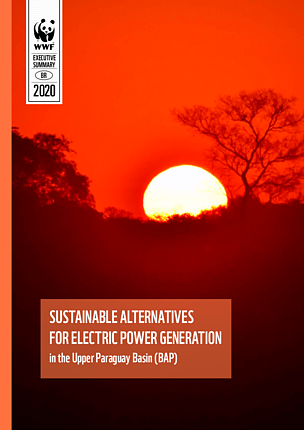 SUSTAINABLE ALTERNATIVES FOR ELECTRIC POWER GENERATION in the Upper Paraguay Basin (BAP)
© WWF-Brasil
There are currently 125 hydropower projects understudy in Pantanal and Alto Araguaia basin – an ecosystem extremely sensible to hydro changes. If each new project uses the maximum area limit permitted by law (13 km2), the flooded area would be 1.625 km2, the same as 228,000 soccer fields. If the reservoir formed one single lake in the shape of a square, it would take 17 days (408 hours) to walk 1,625 km that would be only one side of this square. If the same route was done by bicycle, it would take 3.4 days (82 hours).

However, none of this is necessary to generate electric power in the area, according to a new WWF-Brazil study. The report “Renewable Electric Power Alternatives in Alto Paraguay Basin (BAP)” shows that the same amount of energy projected for these 125 PCHs – 1,172 MW – can be produced with renewable sources with what’s already available in the region, such as sugarcane biomass, animal waste, urban solid waste, especially in the region’s two main cities: Cuiabá and Campo Grande; besides electric power from sewage and solar energy.

"It's possible to generate electric power in the Midwest in a distributed way, meeting the demands of populational growth and local economy by large, by using renewable sources of electric power and balance it with the region's production activity", says Alessandra Mathyas, conservancy analyst at WWF-Brazil. “This model of decentralized energy development with multiple sources would put the Midwest in leading position when it comes to distributed generation in Brazil”, she adds.

Besides avoiding environmental impacts that can compromise the region’s balance and affect important economic activities, like tourism and fishing, renewable sources create many jobs (as opposed to hydro plants, which creates many jobs only during construction). Another advantage of renewables with different sources is the speed of implementation, which reduces the return on investment.

“This is not about banishing PCHs, but not to bet all in only one type of electric power generation”, explains Alessandra. “The combination of multiple sources reduces vulnerability to fluctuations in rainfall regimes, decreases environmental impacts, strengthens farming – which can use sugarcane and livestock waste in another source of income, and creates permanent jobs”, she explains.

According to the study, the ideal model is based mainly on cogeneration with sugarcane plants, photovoltaic energy, and animal waste bio digestion, which would represent, respectively 55%, 21%, and 20% of the energy generated in 2030. By the end of this period, the projects would sum 3.590 MW of power, three times more than the power of all 125 new PCHs planned to be constructed in the hydrographic region of Paraguay.

The average cost for implementing these alternative projects is estimated at R$ 20.3 billion (U$ 3.3 billion), around R$ 5.5 million (almost US$ 1 million) per MW. Data from the Brazilian Association of PCHs and CGHs shows PCHs' economic viability around R$ 5 million (almost US$ 1 million) and R$ 6 million (US$ 1.1 million) per MW. Therefore, the costs for choosing different sources are quite similar to those in the hydro sector.

The combination of sugarcane and animal waste bio digestion cogeneration compensate the scheduling issue of photovoltaic, increasing the consistency of the electric power system, as well as economically strength the agricultural entrepreneur and enable proper management of waste, meeting the current legislation. These alternative sources can replace future PCHs projects, keeping rivers flows, and reducing pressure for new dams.

A WWF study named Free-Flowing Rivers aimed to qualify rivers considering the impacts on river connectivity, including issues related to fragmentation and dam flow regulation, roads, and urban areas, as well as impacts on the water catchment system, waterways, and waterways in potential. According to the study, the settlement of small hydro threatens the floods in Pantanal, which depends on natural periods of drought and flood. This interruption of the natural flow of rivers threatens the entire ecosystem below the dams.

Alto Paraguay Basin (BAP) is about 1,100,000 km2 wide, covering Pantanal and Cerrado biomes. The hydrographic region of Paraguay covers 4,3% of the Brazilian territory (363,446 km²), including parts of Mato Grosso and Mato Grosso do Sul, which consists of the largest part of Pantanal (61%), the world's largest wetland. The main rivers are Paraguai, Taquari, São Lourenço, Cuiabá, Itiquira, Miranda, Aquidauana, Negro, Apa, and Jauru.

Job creation
The study also considered the job creation global average per source to estimate the impact on the local job market of the implementation of generation projects by other renewable sources. The conclusion is that the three biggest job creators were sugarcane bioelectricity, photovoltaic, and animal waste bio digestion. In 2030, the total amount of people employed in these projects would be 29,000, with the potential to increase around R$ 486 million per year, the average of salaries in these states.

In the world, the renewable energy sector employs more than 11 million people (data from 2018). In absolute terms, the productive chains with the biggest impact in job creation are photovoltaic (3,6 million), biofuels (2,1 million), and hydropower (2,5 million). However, when each installed capacity is analyzed, biogas, biofuels, and solar take important positions, creating respectively, 20 jobs/MW, 9,9 jobs/MW and 9 jobs/MW.

Pantanal’s hydropower plants scenario
Small hydro (PCHs) are plants with reduced size and power, mandatorily between 5 and 30 megawatts (MW) of power, and with a flooded area of around 3km2, according to the Brazilian Electricity Regulatory Agency’s (Aneel) Normative Resolution nº652/2003. According to article 4, it is possible to change the criteria for the flooded area once is proved that this sizing is related to other goals, not electric power generation.

However, on November 22nd, 2016, ANEEL published Normative Resolution nº 745, updating the rules for new projects of electric power generation, including PCHs, changing the limit of the flooded area size to 13km2 and power between 5 and 30 megawatts (MW).

Although classified as a project with small environmental impact, an environmental licensing is required (previous license, implementation license and operation license), and granting the right to water resources to have the real dimension of these impacts on ecosystems, biota, environmental aesthetic and sanitary conditions, among social, economic and cultural aspects.

Specifically, when it comes to Pantanal, there's the concern with the environmental impact of PCHs' dams and lakes, hydro changes (downstream and upstream), interference with fish migration, changes in the river fauna and sediment transport, loss in terrestrial and aquatic biodiversity.

Today, the hydropower potential of the hydrographic region of Paraguay (RH-Paraguay) is explored by 7 hydropower plants (UHE), 30 small hydro (PCH), and 16 hydropower generation Centrals (CGH), with a total amount of 1,2 GW.

However, the development of new hydropower projects raises a series of concerns related to the possible social-economic impacts, changes in the hydrological regime, and the quality of water. Therefore, the study of different kinds of renewable sources, like the ones in this study, is so important.