By Maíra Teixeira, from Bonito (MS)

Technological innovations have been increasingly constant in environmental surveillance and protection, as well as in the monitoring of areas susceptible to fires worldwide. As part of WWF-Brazil's strategy to act in emergency responses, trainings on the use of drones for nature conservation have already been carried out in six states of the country since 2018, with the objective of mapping threats such as invasions and deforestation, and also to improve fire prevention and firefighting.

The most recent one occurred from June 7 to 9, in the Serra da Bodoquena National Park (Parna Bodoquena), in Bonito (MS). At the time, a WWF-Brazil team trained 27 people who work in protected areas of Mato Grosso do Sul, Mato Grosso and Paraguay - a country that shares the Pantanal with Brazil and Bolivia.

Among the participants, there were frefighters; park rangers; environmental managers of the Cerrado, such as the Serra Geral do Tocantins Federal Ecological Station and Regional Management 3 of ICMBio (Chico Mendes Institute for Biodiversity Conservation); as well as firefighters of the Irantxe and Menkü Indigenous Lands and technicians from partner organizations, such as OPAN (Native Amazon Operation) and the Neotropic Foundation.

The Parna da Bodoquena was chosen because it is a sensitive area which, in recent years, has suffered an increase in the number of fire outbreaks, from 1,300 in 2019 to 2,800 in 2021. According to data from MapBiomas Fire, the Pantanal was the biome that burned the most in recent decades, with 57% of its area having been consumed by fire at least once between 1985 and 2020. The 77,000 hectares of the Parna da Bodoquena are distributed among the municipalities of Bonito, Jardim and Bodoquena, and are composed of different biomes: Pantanal and Chaco in its surroundings, and Atlantic Forest and Cerrado within the park.

The content of the course was divided into two parts, theoretical and practical. And it included participants who already had basic notions in the use of drones and firefighting professionals who had never handled such equipment.

The theoretical part dealt with topics such as ANAC rules, since the National Civil Aviation Agency regulates drone flights; use of equipment for conservation and support to the management of protected areas; assessment of climatic conditions, topography and monitoring sites; in addition to the use of command and mapping applications.

After students’ placement, there was a practice in the field. And the place chosen was precisely Parna da Bodoquena, created in 2000 with several objectives, such as the conservation of natural ecosystems of great ecological relevance and of species such as the jaguar, harpy eagle and giant anteater, scientific research and development of environmental education activities. The management of the park also hopes to promote recreational and ecological tourism activities.

Felipe Spina, who leads the technology for conservation work at WWF-Brazil, was one of the instructors in the course on using drones for integrated fire management (IFM), controlled burns and firefighting. He prepared an operational checklist that supports pre-flight planning and considers, among other items, battery time, awareness to avoid immovable obstacles such as trees or antennas, and animals.

The IFM is an important strategy and has been used in Bodoquena. The park has areas of Cerrado and Pantanal, biomes that share similarities and where fire dynamics helps in regrowth and seed dormancy breaking. Thus, unlike in the Amazon, which is a wet biome, in the Pantanal and Cerrado the prescribed (controlled) burn is indicated before the dry periods. Such actions can be better planned with drone mapping and help reduce the amount of flammable material available, thereby decreasing the occurrence of large forest fires.

In these situations, the use of drones allows firefighters to quickly take an aerial view of the situation and make more effective decisions. Thus, it is possible to define escape routes, see where the firefront is and which access firefighters can take to reach the best firefighting spot.

Carolina Blanca Alvarez Fretes is a park ranger in the Paraguayan Pantanal, where drones for environmental monitoring are already present. "We use them to be able to see the whole environment and act more quickly and effectively on the sites, reducing the risks for firefighters who work in times of drought, which last a few months and require constant action", she says.

In addition to carrying out the training, WWF-Brazil, in partnership with the European Union, also donated a drone equipped with a thermal sensor and accessories, such as a speaker and flashlight, to Parna da Bodoquena. "In addition to being able to accurately map the areas, capture images and video, the drone received by ICMBio has the function of measuring the temperature - which improves the performance of the firefighters. With the data, we can do the direct on site combat work and effectively intervene, considering wind, temperature and fire direction”, explains Spina.

Manager of Imasul (Environmental Institute of Mato Grosso do Sul) Conservation Units (CUs), Leonardo Tostes Palma is responsible for 10 CUs in Mato Grosso do Sul. He stresses that the use of drones is necessary not only for local monitoring and management. "I already consider them indispensable for the planning and monitoring of fire behavior in the preservation areas. The occurrence of fires, year after year, has intensified. With the mapping of the regions, we can better plan forest firefighting. Drones make it possible to follow the rhythm and the way the fire is behaving at the time of its occurrence. When fire happens in an uncontrolled manner, and without the possibility of understanding its behavior, there is a greater loss of biodiversity", he points out.

Julia Boock, conservation specialist at WWF-Brazil, has been working for years in partnership with conservation unit managers and says that Bonito was the place chosen for the training because it is necessary to support the strengthening of the Bodoquena Parna. “We support the effectiveness of the management, which has sought improvements for those on the front line, such as park rangers and firefighters. It takes training to improve the firefighting and protection of the units and the people in the region", he says.

"The use of drones is essential to prevent fires of great magnitude through the planning of preventive actions and also through firefighting. The equipment shows firefighters the safest firefighting areas, the possible logistics, where the water sources and main accesses are. Unfortunately, forest fires are a trend”, stresses Osvaldo Barassi Gajardo, conservation specialist and leader of the WWF-Brazil emergency response center. “We need technology to better respond and protect those who work in the field”.

Gajardo says that WWF-Brazil has been working with local partners to support the implementation and training of fire brigades. In total, 20 have already been formed in the Pantanal, Cerrado and Amazon.
“For us, it's wonderful to be able to see and map where the fire is. We often did not have an ideal visibility of the outbreaks and put ourselves at risk. But now, with the drone, we have a broader vision and more security to work", explains João Batista Benites, firefighter at Parna da Bodoquena. 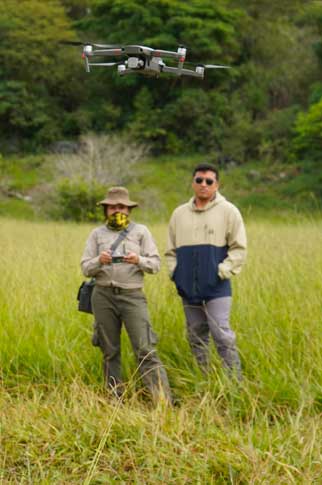 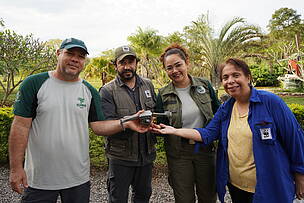