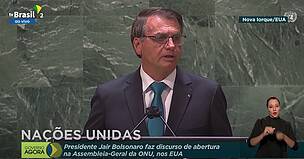 For the third year in a row, Jair Bolsonaro occupies the main planetary tribune without assuming the posture of a statesman expected from a President of the Republic. Once again, he used an opportunity provided by his position to repeat campaign slogans unrelated to the main challenges of the planet and Brazil – these really deserving a president's attention.


With information and allegations that are not supported by facts, he tried to hide the disaster that his administration has brought to Brazil in all areas, including the environment. Worse: he disrespected Brazilians who still suffer from the nearly 600,000 deaths caused by Covid's mismanagement of the pandemic by defending the use of treatments that have been proven to be ineffective – perhaps the most glaring example of how far their discourse is disconnected from reality.

Words on the United Nations rostrum do not change the fact that Brazil is suffering from the worst water crisis in 90 years due to the combined effect of meteorological factors with the growing deforestation of the Amazon. In the three years of his government, Brazil had three records of deforestation and fires, bringing the forest ever closer to its tipping point. According to the Amazon Scientific Panel, about 17% of Amazon's forests have been converted to other land uses and at least another 17% have been degraded. Scientific studies show that in some regions the Amazon already emits more carbon than it captures.

For the third year in a row, the President of the Republic ignored not only reality, but also the great issues that distress the Planet. The destruction of law enforcement institutions that took place in his government and the resulting acceleration of environmental devastation will have a long-term effect not only for the country but for the world.

Agriculture relies on rains and these depend on a protected Amazon. Bolsonaro not only paralyzed the demarcation of indigenous lands, he also promised to change the law and interfere with the judicial branch in order to reverse demarcations already made. Although he sells on, to the part of the agricultural sector that supports him, that this would be a gain, as it would allow for greater expansion of pastures and crops, this is actually a loss.

Currently, indigenous lands preserve 25% of what is left of the Amazon Forest and, every day, they send 5.2 billion tons of water vapor free of charge to the rest of South America, through the transpiration of the forests they preserve. It is this steam that will form the rains that allow Brazilian producers to harvest two crops a year, making the country an agricultural champion. Less indigenous lands, therefore, means less production.

The defence of the Forest Code, in turn, does not reflect what this legislation effectively guarantees. The Forest Code is a law that still allows extensive deforestation (88 million hectares), even though the country has more than 60 million hectares of underutilized land. The forestry laws of most countries (France, Germany, Sweden, Japan, others) interdict the conversion of forests to agricultural land, with very rare exceptions.

Unfortunately, the speech was not surprising, it sums up what the Bolsonaro government has been: disoriented, removed from reality and targeting only a small portion of the population.