Pacheco and the Climate: With the Amazon under threat, international organizations point to Senator Rodrigo Pacheco, president of the Brazilian Senate and National Congress, as central to the future of the forest - and of the climate. 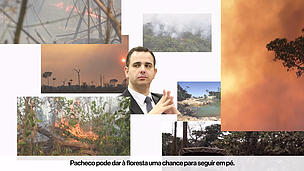 Rodrigo Pacheco, president of the Brazilian Senate, is able to block attacks on the Amazon rainforest
© Youtube / Reprodução

A video in English about Brazilian Senator Rodrigo Pacheco is being shared throughout online social networks in Europe and the USA. The reason? Bills approved by the Chamber of Deputies -as Brazil’s lower house is called, which favor the destruction of the Amazon- and that are now awaiting approval by the Federal Senate. With this, the onus of environmental destruction has changed hands and been passed on to Senator Rodrigo Pacheco, who can now block attacks on the Amazon rainforest, according to the video.

With the departure of the main architect of the country’s environmental dismantling, former environment minister Ricardo Salles, the National Congress has begun to assume this role, and protagonize these setbacks. Several bills, supported by Bolsonaro and his congressional alliances, are about to destroy protections, legalize environmental crimes and strip indigenous peoples of their rights.

The video has surfaced in the same week that the IPCC (Intergovernmental Panel on Climate Change) released alarming data about the future if the world does not quickly zero the emissions of gases causing the greenhouse effect. Across the planet, the main source of emissions is the burning of fossil fuels. In Brazil’s case, it is the burning of forests such as the Amazon.

Studies show that the forest does not sustain itself beyond a certain limit and the increase in deforestation in recent years has brought the Amazon closer and closer to this limit. For this reason, the video highlights that if the world loses the Amazon, it will lose its entire future: the scenarios designed by scientists prove incredibly adverse conditions for human survival in scenarios of high carbon emissions.

Since Jair Bolsonaro has assumed the presidency in 2019, the Amazon has been under unprecedented attack. Through statements, videos, face-to-face visits and, above all, the dismantling of inspection and controlling structures, Bolsonaro has supported all types of illegal activity in the forest - from mining to land grabbing, with the use of attacks on indigenous communities and arson.

Rodrigo Pacheco, president of the Brazilian Senate, is able to block attacks on the Amazon rainforest
© Youtube / Reprodução Enlarge