Stories of struggle and perseverance to keep the Cerrado alive 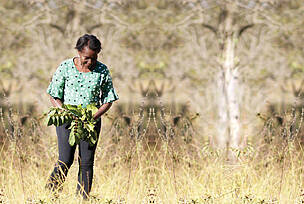 To portray the culture and histories of the peoples and traditional communities of the Cerrado, Rede Cerrado - an organization composed of more than 50 associated civil society entities, with the support of WWF-Brazil - launches an online album with the reality of the second largest biome in both South America and Brazil. It is a region with beautiful landscapes, but it hides a past - not too distant - full of traditions and a present marked by land conflicts, invasions, illegal expropriations and lost lives.

Despite its greatness, the Cerrado suffers from the loss of natural wealth, with its landscapes being transformed into pastures or crops, and with the advance of deforestation - which in the last year alone was around 13%. And continuous deforestation impacts on the amount of water produced, stored and distributed by the biome, leading to water shortages in cities and industries and the disappearance of native species of trees and animals.

To describe the day-to-day life of this highly threatened biome, Rede Cerrado is launching an album of stories of struggle and resistance under the eyes of women who live and love the biome. “The platform is like a portrait of the natural and social wealth of the biome. We seek to highlight the diversity of peoples and traditional communities that struggle for the survival of the Cerrado and its ways of life ”, says Kátia Favilla, executive secretary of Rede Cerrado. "Histórias do Cerrado" (Cerrado Chronicles)  is an offshoot of the Cerrados campaign (www.cerrados.org.br), a series of ten podcast episodes about the realities of the Brazilian savannah told from real stories of residents of the region. The action was carried out by the two organizations in June last year.

“These are real stories of traditional communities and native peoples, also known as guardians of biodiversity and the waters of the Cerrado. It is the savanna with the greatest biodiversity on the planet, a living cultural heritage, which even housing 12% of the Brazilian population and reaching 11 states plus the Federal District - it is still little known and valued compared to the Amazon, for example. That is why we need to raise awareness and alert civil society and public bodies about the importance of preservation so as not to allow new reports of conflicts and deforestation to be part of the history of this very important piece of Brazil ”, declares Gabriela Yamaguchi, director of Engaged Society of the WWF -Brazil.
Minas Gerais - The first agricultural frontier
Célia is part of an indigenous ethnicity that was once considered extinct but today is the most populous of the state of Minas Gerais. The history of the Xacriabá is entwined with the origins of the devastation of the Brazilian Cerrado.

Goiás – Plant medicine
Lucely is a specialist in medicinal plants. She extracts the healing ingredients from the world's most biodiverse savannah. In the Goiás Cerrado, home pharmacies and the raizeiras' expertise keep the Biome up and running.

Piauí – Lawless Land
On the last agricultural frontier, hired guns and tractors threaten communities. Claudia is a witness to the everyday uncertainty and fear that pervades the hinterlands of the Matopiba.

Maranhão – The palm forests
Women unite to resist in places where the vegetation is fast disappearing. Rosalva is a young babaçu coconut quebradeira (breaker) whose life is a battle for the right to live well.

Bahia –The land grabbing and the struggle for territory
Traditional communities suffer from miserable conditions and illegal land dispossession. Lusineide is a young community leader who feels the spread of the inequality that originates from soy monoculture in her skin.

Distrito Federal – A hinge cell
To ensure the Cerrado is preserved, its guardians organize around the Rede Cerrado, a movement that influences public policy, strengthens the traditional way of life of communities, and informs society of the Biome's reality.

Mato Grosso do Sul – The expansion of monoculture
On a rural settlement created by land reform, sustainable practices generate income. In the state distinguished for its monoculture, Preta explains how family farming grows when training and technical support is available.

Tocantins – Experience and coexistence
Ana Mumbuca tells about the quilombola way of life in the oasis of the Jalapão. Century-old farming techniques face a drying of the Biome, yet the experience of sustainability brings hope.

São Paulo – The smallest portion
On the most developed, expensive, and devastated lands of the country, the Cerrado has all but disappeared. Only one percent of the Biome still exists in São Paulo.

Paraná – The southernmost savannah
In its southernmost part, small fragments of the Cerrado remain. On Paraná's borders, the fields of araucárias merge with remnant native species of the Brazilian savannah.

About WWF-Brasil
WWF-Brasil is a Brazilian non-governmental and non-profit organization that works to band the current curve of environmental degradation and promote a future in which society and nature live in harmony. Created in 1996, it operates throughout Brazil and is part of the WWF Network. Support our work at wwf.org.br/doe