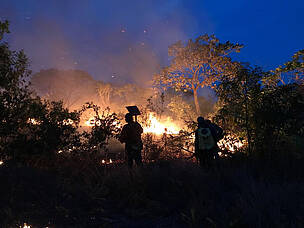 In February 2021, a video is widespread on social media blaming the four volunteers from the Alter do Chão Brigade of setting the Amazon rainforest on fire in the region where they worked and of doing so to commercialize images with WWF-Brazil, although the case had already been clarified more than six months ago. The edited video contains excerpts from an interview by a member of the Pará Civil Police made before the end of the investigations, suggesting that the information is recent and that the charge is true – in a clear example of how the lies disguised as news works, the so-called fake news.

The spread of defamatory videos and posts more than a year after the events shows bad faith of those who intend to detract the name of the forest's protectors, such as the Alter do Chão Brigade and the WWF-Brazil. The video taken out from its original context is currently an instrument of defamation. It serves only as an instrument of disinformation, aiming to tarnish the image, reputation and honour of those involved.

An investigation by the Federal Police, completed in August 2020, ruled out the four volunteers' participation in the fire that gave rise to the Civil Police inquiry. Federal Police experts used satellite images and found that the fire started miles away from the point described by state agencies in Pará. In December 2020, Judge Alexandre Rizzi released the four citizens from precautionary measures that replaced their prison in November 2019. The Civil Police inquiry has not progressed but remains open.

It is important to note that WWF-Brazil was never approached by the police to manifest itself due to the events of November 2019, having not been investigated or indicted, nor being sued in a lawsuit addressing these facts. Even so, on the occasion of the outbreak of the investigation, WWF-Brazil took a position to repudiate the attacks on its partners and the lies surrounding its name.

The video circulating on social media dates back to 2019. On November 26th, 2019, the four volunteers from the Alter Brigade were arrested by the Pará state's Civil Police and accused - without evidence - of arson. The investigation proved to be inconsistent, and it did not advance with any evidence against the brigadiers. Two days after the media show, the four citizens were released. The responsible police chief, José Humberto Melo Jr., was replaced by the director of the Specialized Police Station for the Environment, Waldir Freire Cardoso.

The way how this case has been conducted is extremely worrying from the point of view of democracy. Despite the splurge made by local authorities at the time, the Civil Police's investigations have not progressed.

The Federal Police, which also investigated the case, asked for the inquiry to be closed because they concluded that there is no evidence to support the brigadiers' participation. Federal Police experts used satellite images and found that the fire was started miles away from the point described by agencies in the state of Pará.

In the critical moments of the dramatic advance of fire outbreaks in the Amazon, WWF-Brazil concentrated its efforts on supporting local entities involved in fighting the fire and defending indigenous territories and other protected areas. Resources received in a global solidarity network were passed on to local organizations. Since August 2019, our projects have already reached more than 93 million hectares of land - an area equivalent to more than 18% of the Legal Amazon and larger than the sum of the territories of France, the United Kingdom and Denmark.

To carry out this work, partnerships were signed with 23 civil society organizations and with nine government agencies, such as the Amazonas State Secretariat for the Environment, the Acre State Secretariat for the Environment and the Acre Environmental Police. The actions, which were carried out in 135 indigenous lands and conservation units, directly benefited more than 69.9 thousand people and, indirectly, more than 3.7 million. More than 7 thousand pieces of equipment were donated, and 54 pieces of training, courses, workshops and assemblies were held with more than 2.9 thousand participants. Learn more about our work here.

Among the contracts signed was the Technical-Financial Partnership with the Alter do Chão Aquifer Institute, in the amount of BRL 70,654.36, for the acquisition of equipment such as drone, GPS, rakes and hoes - a contract that ended in March 2020, with all the accountability reports being delivered and approved. Once again: WWF-Brazil did not buy photos of the brigadiers nor received a donation from actor Leonardo DiCaprio.