Pantanal: Fire has destroyed over 90% of the macaw's refuge | WWF Brasil

Pantanal: Fire has destroyed over 90% of the macaw's refuge 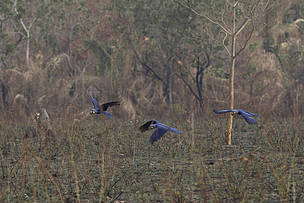 Perigara Farm, as it is known, is the most important refuge of the blue macaws
© Bruno Carvalho/IAA/WWF-Brasil
WWF-Brasil emergency action supported Instituto Arara Azul in diagnosing the impact of the wildfire on species conservation

Amid the devastation caused by the Pantanal wildfires, Fazenda São Francisco do Perigara, in Barão de Melgaço, Mato Grosso, brought encouragement to researchers who are beginning to assess the effects of the fires on the biome. The property serves as a sanctuary for blue macaws and, despite having 92% of the territory affected by the flames, it still registers a massive presence of this bird and other species.

The preliminary survey was carried out by Instituto Arara Azul, with the support of other researchers, from September 22 to 27 this year, about a month after the wildfires hit the 24,994-hectare property. The support of partners such as WWF-Brasil, who oversaw logistics, developed the work. This month, the institute will make a new expedition, reapplying the survey methodology, to find out what measures need to be taken or reinforced to help blue macaws survive.

Perigara Farm, as it is known, is the most important refuge of the blue macaws, concentrating 15% of the species’ total population. Birds have used a bocaiuval (cluster of bocaiúvas palms) near its headquarters for at least 60 years. At its peak, the area has recorded about 1 thousand birds in the area, mostly young non-reproductive adults.

The flames came from a neighboring area. The fire was sovereign, dominant, described the owner of Perigara, Ana Maria Barreto, in a live broadcast on social media on September 29. “When we flew over the area, I felt like it was over. There would no longer be a Pantanal". Neiva Guedes, the president of the institute, said. He is the professor of the Graduate Program in Environment and Regional Development at Uniderp, who coordinated the expedition team with five more researchers, including biologists and ornithologists. The dormitory was not affected, but in the surroundings, the vegetation, in particular the acuri and bocaiuva palm trees, which are items consumed by macaws, were hugely impacted by the fire and will take a year for it to produce new bunches.

In the field, going through the property, the initial negative impression gave way to hope. Researchers realized the flames went through the area in a nonhomogeneous manner. In some destroyed regions, fire damaged even the tallest palm trees, while in others, there was less impact and well-preserved pockets of green area. A surprise came on the second day of the expedition. “We found a male emu, with 16 five-day-old chicks, one month after the fire, our hearts started to race, we didn't expect to see something like this anymore”.

Ornithologist Pedro Scherer Neto, who carried out the bird census on the farm in 2001 and has been monitoring the property since then, was also relieved by what he found. “They [macaws] are there," he said, explaining that, despite having left the dormitory, they are scattered throughout the property.

Scherer explained the unique behavior adopted by the blue macaws that populate Fazenda Perigara was the base for the census. These birds follow the cattle, taking advantage of the palm fruits left by the cattle, and these fruits are the macaws' principal source of food. Where the cattle went, they followed.

The expedition identified other animals. Biologist Bruno Carvalho caught jaguar, peccary, deer, and tapir footprints. The challenge will be to ensure the survival of animals in the post-fire when devastation is still a problem in the food search.

Macaw reproduction
Macaw reproduction may also be in jeopardy. On this trip,  the 30 registered nests were not monitored, since fallen trees and branches blocked the paths. Twenty-one nests were analyzed, of which one had an egg and three had a baby each. Analyzing the month of September in 2018 and 2019, researchers discovered that there was a 35% impact on reproductive couples.

Some measures have already been taken in managing the environment, such as deepening water storage tanks and using boxes to replace nests. According to Neiva Guedes, the post-fire impacts are perhaps worse than the fire itself, as the fauna that survives must find shelter, food, and escape predation. And this is what the macaws will have to face now.

Support from WWF-Brasil
The farm is difficult to access and reaching the affected areas required logistical support. The team left Cuiabá, headed for Poconé and, from there, took a plane to the farm, located in the region of ​​the municipality of Barão de Melgaço, on the banks of the São Lourenço River. WWF-Brasil provided the aircraft, as well as the vehicle used in the expedition.

This support is part of the "Respostas Emergenciais em Campo" Project, according to WWF-Brazil conservation analyst, Osvaldo Barassi Gajardo. The Pantanal and Amazon wildfires in 2019 resulted in the development of the work to respond to those environmental emergencies.

Gajardo explains that four axes are the base of the project: prevention and firefighting, through the purchase of equipment and training of community brigades, in partnership with the NGO Ecoa (Ecologia em Ação - Ecology in Action) and PrevFogo; humanitarian aid, with the distribution of basic food supplies, developed in conjunction with ICV (Instituto Centro de Vida); service to fauna, such as donation of equipment and medicines to animal rescue centers and, also, in research, on the impact of the wildfires on flora and fauna but also on the best fire management techniques for the Pantanal.

The goal is to make partnerships that are not restricted to specific work, and instead, to build a long-term relationship to prevent wildfires and protect the fauna and flora affected during periods of drought and major fires.
“We have this more specific and punctual work, but we are also structuring, supporting actions in the medium and long term to act in the conservation of species regarding wildfires and create something that could be the most strategic joint future actions that have the greatest impact for the protection of the biome," explained the analyst.

Perigara Farm, as it is known, is the most important refuge of the blue macaws
© Bruno Carvalho/IAA/WWF-Brasil Enlarge 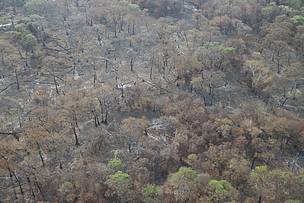 The property serves as a sanctuary for blue macaws and, despite having 92% of the territory affected by the flames, it still registers a massive presence of this bird and other species.
© Bruno Carvalho/IAA/WWF-Brasil Enlarge 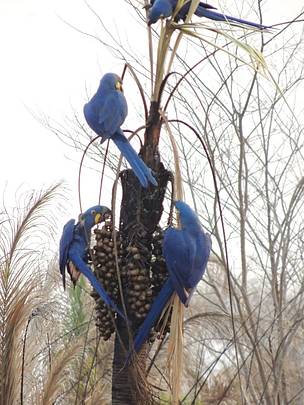 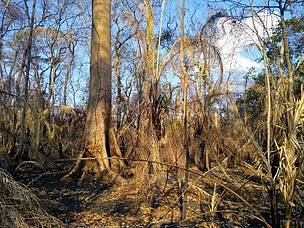 The vegetation, especially the acuri and bocaiuva palms, which are items consumed by macaws, were greatly impacted by the fire
© Fernanda Fontoura/IAA/WWF-Brasil Enlarge