Partnership to fight fire in the Pantanal | WWF Brasil

Partnership to fight fire in the Pantanal

To help quell the flames, in November 2019, WWF-Brazil donated to Imasul three kits composed of a jet lance with a storage capacity of 600 liters of water.
© Daniela Venturato / WWF-Brasil


Corumbá, in Mato Grosso do Sul, is the municipality with the highest number of fires in the country in 2020. It accounts for 12.7% of all fire spots detected by the National Institute for Space Research (Inpe) between January 1 and October 15 - and by an impressive 38% of the 20,796 outbreaks recorded in the Brazilian Pantanal. The situation in the region became so dramatic that the main access to Corumbá, via the BR-262 highway, was even blocked due to smoke. It is not by chance that scenes of charred animals and flames that destroyed about 23% of the biome shocked the world.

With the lack of action by the federal government, which limited the adequate performance of the brigades of the Chico Mendes Institute for Biodiversity Conservation (ICMBio) and the Brazilian Institute for the Environment and Renewable Natural Resources (Ibama), much of the work to combat fire in Mato Grosso do Sul was conducted by state agencies, under the coordination of the Environment Institute of Mato Grosso do Sul (Imasul). “We have been dealing with fires for a year, leaving one situation and entering another. Only in February did we have a small truce”, says Leonardo Tostes Palma, manager of Conservation Units at Imasul.

To help quell the flames, in November 2019, WWF-Brazil donated to Imasul three kits composed of a jet lance with a storage capacity of 600 liters of water. Installed in truck bodies, these pieces of equipment allow firefighters to act in places that are difficult to access for large vehicles. This year, they were used, for example, in fires in the municipalities of Corumbá and Aquidauana. “Our focus today is on conservation units”, says Palma. Among the most endangered in the Pantanal of Mato Grosso do Sul are the parks Pantanal do Rio Negro, Várzeas do Rio Ivinhema, and Serra da Bodoquena.

WWF-Brazil is part of the Interinstitutional Committee for the Prevention of Forest Fires. “We work with the governments of Mato Grosso and Mato Grosso do Sul, supporting the development of a campaign to combat and prevent fires, in addition to the donation of equipment”, explains Julia Boock, environmental analyst at WWF-Brazil. "We understand that short-term and long-term actions are necessary, developing emergency and preventive work, such as training and awareness of society regarding fire management".

But the fires were so intense this year that in some areas even the trucks could not reach it. According to Inpe, the number of fires in the Brazilian Pantanal jumped 222% from January 1st to October 15th, compared to the same period in 2019. A record. So much so that Imasul contracted 400 hours of flights for aerial combat against the flames. “We have never used as many hours of flight as we do now”, emphasizes Palma. In September, Mato Grosso do Sul had 1,050 people directly involved in combating fires. Firefighters from Paraná and Santa Catarina reinforced the teams.

Endemic species of animals and plants may have been lost forever in the Pantanal. It was a repetition of what had already happened last year, a tragedy announced by experts in a scenario of high temperatures, historic drought, deforestation, and disobedience to environmental laws. Hotspots started to grow in the biome before the dry season - in March. And even with the government's ban on the use of fire at the beginning of the second half of this year, the number of outbreaks has only grown. Part of these arsons, according to an investigation by the Federal Police under Operation Matáá, was caused by ranchers.

WWF-Brasil has been running projects in the Pantanal for 20 years, in partnership with local organizations. In the face of the environmental crisis caused by burning in the biome, actions involving the sending of protective equipment and training for brigade members have been prioritized, in addition to the delivery of food baskets to local communities.


In the Amazon
Since August 2019, WWF-Brazil, with support from the WWF Network, has been reinforcing its actions to combat fires and strengthen territorial surveillance in the Amazon. The projects have already reached more than 93 million hectares of land - an area equivalent to more than 18% of the Legal Amazon and larger than the sum of the territories of France, the United Kingdom and Denmark.

To help quell the flames, in November 2019, WWF-Brazil donated to Imasul three kits composed of a jet lance with a storage capacity of 600 liters of water.
© Daniela Venturato / WWF-Brasil Enlarge 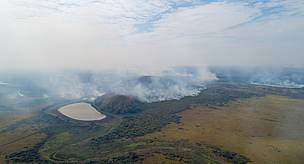