Amapá: most consumed fish are also the most contaminated by mercury | WWF Brasil

Amapá: most consumed fish are also the most contaminated by mercury 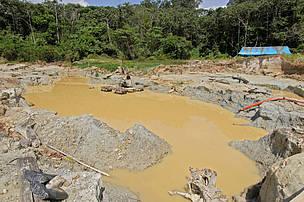 Area degraded by mining within the Tumucumaque Mountains National Park, in Amapá
© © Zig Koch / WWF
Pirapucu, tucunaré and trairão, species most consumed in the region, are also the most contaminated

A new study carried out in Amapá, in the northern region of Brazil, suggests that the eating habits of local populations, which include a preference for carnivorous fish, is exacerbating contamination by mercury used in small-scale artisanal gold mining. All fish analyzed in the survey showed detectable levels of mercury and 28.7% exceeded the World Health Organization mercury threshold for human consumption. However, four of the seven species with the highest concentrations of mercury are among the most consumed in the region: the highest level was detected in Boulengerella cuvieri (pirapucu), followed by Cichla monoculus (tucunaré) and Hoplias aimara (traírão) - all carnivorous. As predators, carnivorous fish bioaccumulate large amounts of mercury throughout their life cycle.

Conducted by researchers from the Sérgio Arouca National School of Public Health of the Oswaldo Cruz Foundation (Ensp/Fiocruz), WWF-Brazil, IEPA - Institute of Scientific and Technological Research of Amapá and Iepé-Institute of Research and Indigenous Training was published in the International Journal of Environmental Research and Public Health. Their results suggest that local preference for carnivorous fish species poses a serious health risk.

For this reason, this is the first study with clear recommendations to reduce exposure to mercury through the consumption of fish in the State of Amapá. The researcher's proposal is that the consumption of carnivorous fish species does not exceed 200 grams per week, with special attention to the consumption of mandubé, pirapucu, tucunaré and trairão, which should be ingested once a month. “The study provides compelling data on the level of destruction that gold mining is promoting in the Amazon. We were already aware of how much gold mining destroys the forest. Now, we have more evidence of how much it also destroys the health of people living in the forest. Gold consumers around the world need to understand that they are purchasing a metal that is threatening the lives of innocent people. Public authorities urgently need to assume their responsibility to guarantee food security for local populations, who traditionally depend on fish as the main source of protein, says Marcelo Oliveira, Conservation specialist at WWF-Brazil.

Researcher Sandra Hacon, from Ensp/Fiocruz, highlights three aspects of the study. "In addition to guiding the population not to exceed the weekly consumption of 200 grams of carnivorous fish, we encourage the ingestion of other species and food, since the region's biodiversity is fantastic. The study also warns of the destruction caused by the mining and recommends that the public authorities take responsibility for ensuring food security for local populations.”

ASMG (Artisanal and Small-Scale Gold Mining), usually organized in illegal networks and conducted by miners and middlemen, is the main source of emissions, contamination and consumption of mercury in Latin America and the Caribbean. In the north of the Brazilian Amazon, ASGM has contaminated the environment and people over the past century.

Such activities have expanded significantly in the Amazon in the past two decades, consolidating itself as one of the main causes of deforestation and habitat degradation in the north of the Brazilian Amazon, particularly on the borders between Guyana, French Guiana, Suriname and Venezuela and the Brazilian states of Roraima, Amapá and Pará. Also known as the Guiana Shield Ecoregion, it covers 250 million hectares and contains one of the largest uninterrupted primary tropical forest complexes on Earth.

This situation was exacerbated by the global increase in the price of gold, which boosted the expansion of illegal ASGM activities in the Amazon and further threatens the environment and human rights of local communities.

It is this type of mining, invariably illegal, that exposes traditional communities that depend on natural resources for their survival to contamination, adversely affecting the health of riverside communities and particularly indigenous peoples. For Décio Yokota, Iepé's Deputy Executive Coordinator, “these results are especially worrying for indigenous peoples and other traditional communities in the region, whose fish is practically their only source of protein for much of the year. These communities often consume fish with every meal, which considerably increases exposure to this contaminant. In addition to environmental degradation and mercury contamination, gold mines also bring drug trafficking, arms, prostitution and threats to leaders close to the communities. During quarantine, communities are especially concerned with the swelling of the mines, the result of the economic crisis as they become a vector of virus contamination in the villages, even in the most isolated places”.

It is known that fishing in the Amazon provides food security and reduces malnutrition rates, as fish are the dominant food source of essential amino acids, lipids with fatty acids, minerals and vitamins. For this reason, in regions dominated by ASGM, human exposure to mercury occurs mainly through the bioaccumulation and biomagnification of methylmercury from fish consumption. The study showed that inland fish had higher levels of mercury compared to coastal fish.

Jorge Souza, IEPA's President-Director emphasizes the importance of the study for the Amapá population - “now, we have an indication of how the Amapá population should behave in relation to the consumption of contaminated fish in order to avoid or minimize the damage caused to their health to guarantee good access to our fishing resource, so important for our state", he says.

In the Brazilian Amazon, indigenous peoples, riverside communities, fishermen, quilombolas, peasants and extractivists live in areas close to rivers, bays and streams - therefore, they are highly exposed to compounds containing mercury. This reality is compounded by the social vulnerability of these communities, including reduced access to health care, formal education, regular income, basic sanitation and drinking water. In addition, these communities suffer from high rates of malnutrition, especially in children under 5 years of age. The study also indicated that a higher risk of contamination by mercury was observed in children in the interior.

Another factor that can significantly influence the levels of mercury in aquatic ecosystems in the Amazon is erosion, which mobilizes the mercury accumulated in soils. Consequently, efforts to reduce exposure to mercury - particularly in populations that are at low waters from ASGM sites - must also address soil erosion, with a particular focus on vulnerable rivers and streams in riparian forests. In addition, changes in land cover/use lead to frequent forest fires, which release large amounts of mercury into the atmosphere and aquatic systems. These issues require political will to implement effective policies to reduce deforestation factors in the Amazon.

About the study
The study, which aimed to assess the potential toxicological risks to health caused by the consumption of fish contaminated by mercury, was carried out in five regions of the State of Amapá, including some of the most biodiverse and economically significant hydrographic basins in the region, always in protected areas and conserved, including the largest nature reserve in Brazil (Parque Nacional Mountains of Tumucumaque). Rivers were chosen that bordered protected areas due to the greater occurrence of mineral deposits and the greater number of ASGM sites.

These locations were identified based on gold mining deforestation maps, literature reviews, presence of local communities, influence of coastal tides or inland waters, sampling logistics, distance to protected areas and interviews with protected area managers and locations with knowledge of the regional history of gold mining.

428 fish were sampled from 18 sites in terrestrial and coastal aquatic systems between August 2017 and May 2018. The fish were caught by local fishermen hired to support the research project. According to local fishermen, each species of fish was caught using specific equipment. Each sample was identified at the species level and a minimum of 70 g of muscle tissue (skin free) was extracted from the dorsal region of the fish's body. All dissection tools were sterilized before sampling to avoid contamination. The samples were stored in ice boxes and frozen for transport to the laboratory. The study was carried out in accordance with Brazilian regulations (IN 03/2014), under license SISBIO 58296-1.

The concentration of mercury in the fish collected exceeded the safety limit in 77.6% of carnivores, 20% of omnivores and 2.4% of herbivores.