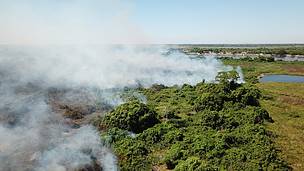 Burning in the Pantanal, March 2020. Santa Teresa Farm, region of the Baía Vermelha. municipality of Corumbá - Mato Grosso do Sul, Brazil. In the background it is possible to see the Jatobazinho School.
© Instituto Homem Pantaneiro
WWF-Brasil

Six months after the worst periods of forest fires in the last years, satellites records in the Pantanal raise great concerns about the incidence of fires in the region in 2020. Experts indicate that unusual drought for the period and inadequate fire management in productive areas are the main reasons for the growing number.

A comparison yoy from January to April 2019 with 2020 show scary numbers: 674 in 2019 and 1456 in in 2020. The occurrence of fires in the region more than doubled from one year to the next. This number is the highest in the last 10 years and approximately sixfold than the average for this period. The burned area in the first four months of 2019 was 1172 km². In 2020 it was 1628 km² - an increase of 38%, a percentage that should rise even more with the increasing detection of hot spots.

Júlio Sampaio, manager of the Cerrado Pantanal Program of WWF-Brazil says that “inappropriate practices and the use of fire as a management tool without techniques and control are at this moment elements that endanger the conservation of the largest tropical humid area on the planet. The Environmental Military Police was called because the spots have an intentional cause. We know that fire is part of the culture of the Pantanal, but at the moment it is a great threat to the riverside communities, to properties, and especially to the status of Natural Heritage of Humanity given to the Park and private areas around”, points out Sampaio.

Figure 1 – hot spots from January to Abril of the last 10 years.

Julio also points out that these numbers reveal a great weakness of the region. “The Pantanal biome is dependent on the water cycle. In a scenario of change in the rain regime, uncontrolled fires will be even greater. The damage to Pantanal biodiversity and the economy will be incalculable. These facts point to the need for a new fire management model in the region. And it needs to happen now.”

Figure 2 – Distribution of hot spots
As occurred during the last fire period in the region, some municipalities house larger number of spots. In March, Corumbá, Poconé and Porto Murtinho were among the most affected. Communities and civil society organizations have reported several fires, some of them with greater intensity in the Pantanal National Park Matogrossense and areas close to Serra do Amolar.
In times of Covid-19, unfortunately mobilization actions to combat these fires, especially in protected areas, become a major challenge. On the other hand, considering the period of occurrence of these fires and the municipalities most affected, there are indications that these fires are
associated with the inadequate management of productive areas.
Climatic aspects also contribute to this significant increase, since this year saw an unusual drought period for the biome.
According to Embrapa Pantanal, the rainy season in the region n (November to March) has a historical average of 810 mm. From November 2019 to March 12, 2020 it rained 350 mm, which corresponds to 43% of the expected rainfall.
The System of Fire Fighting Occurrences in Vegetations by the Military Fire Brigade in the State of Mato Grosso do Sul points to an increase in occurrences in the interior and metropolitan region. In March 2019 there were 280 occurrences and in March 2020 there were 408 occurrences. “When the number of hot spots increases, the number of occurrences attended by the Military Fire Brigade in the state of Mato Grosso do Sul increases too”, explains the state civil defense coordinator of MS, Fábio Santos Catarineli, that explains the main factors that induce fires: “the absence of rain, low relative humidity and high temperatures: these factors reduce the humidity of the vegetation that is conducive to burning”.
A lot of civil society organizations are already in action to control fires. “We are working to fight fires in the Serra do Amolar region. There are many spots at in the Red Bay region, close to Jatobazinho School, and spots at Pantanal Matogrossense National Park”, comments Dr. Letícia Larcher, Technical Coordinator of Homem Pantaneiro Institute. “As managers of the Serra do Amolar Protection and Conservation Network, it is part of our routine to monitor hot spots in the region.”
The Institute, together with members of the Serra do Amolar Protection and Conservation Network, such as the Acaia Pantanal Institute, Corumbá Fire Department, ICMBio, IBAMA and the Navy, performed helicopter overflight, captured images with drones and sent field technicians to evaluate the best strategic combat actions.
As in 2019, fires do not respect geopolitical boundaries. WWF works to exchange information and fire fighting intelligence in countries that share this ecosystem (Brazil, Bolivia and Paraguay). “It is important that there are joint and coordinated actions so that the situation does not get worse. This involves preventive actions, such as training campaigns for farmers and local populations, but also an intensification of inspection and monitoring”, reinforces Julio.

Burning in the Pantanal, March 2020. Santa Teresa Farm, region of the Baía Vermelha. municipality of Corumbá - Mato Grosso do Sul, Brazil. In the background it is possible to see the Jatobazinho School.
© Instituto Homem Pantaneiro Enlarge 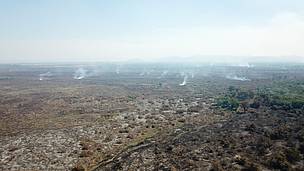 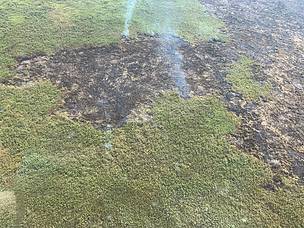