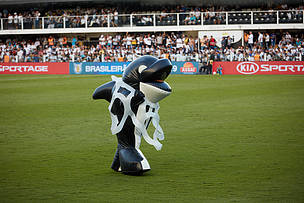 Mascote Baleinha entra em campo com um pedaço de plástico preso ao pescoço
© WWF Brasil
The plastic is in the food we eat, the water we drink and the air we breathe. It now accounts for about 80 percent of all the trash in the sea, and if nothing is done, by 2050 we will have more plastics in the oceans than fish. This scenario led the Santos FC team to join forces with WWF Brazil and during a match against Fortaleza, on Sunday (25), the mascot Baleinha entered the field attached to a giant piece of plastic. At the same time, the players took to the field with a banner explaining the action, which also featured the campaign logo on the shirts.

"We found in Santos, which has as its mascot an animal threatened by ocean pollution the ideal partner to broaden the fight for the environment. To put the spotlight on the cause, led by WWF, we add such a serious matter to the Brazilian's passion for football", says Adriano Alarcon, F.biz's CCO.

Santos resorted to one of its most popular icons to make this alert, because plastic pollution has reached alarming levels and 80% of the plastic that pollutes the sea originates in cities, reaching the seas through rivers. The sun, the oxidation and the impact of the waves gradually fragment the objects, transforming them into microplastic (pieces of plastic less than 5mm), which are ingested by marine organisms, even entering our food chain. In addition, animals absorb hazardous chemicals such as plastics containing bisphenols.

“Santos FC has embraced this cause, but it is not unique to the Santos community: we are talking about a global problem that affects all families. Therefore, all the fans are invited to join in this fight for a cleaner planet and a healthier diet”,says José Carlos Peres, President of Santos Futebol Clube. The team opted for a partnership with WWF Brazil because it is leading an international campaign to eliminate plastic in the wild, which includes a petition to be presented at the United Nations World Forum to key global leaders.

“According to World Bank data, Brazil is the fourth country in the world that generates the most plastic waste in the world”, says Gabriela Yamaguchi, Director of Engagement at WWF Brazil. “Of the total plastic waste produced annually in Brazil, only 1.28% is effectively recycled. To achieve a cross-border solution, we need to unite people, businesses and governments around global policies and systematic solutions”. Another change that Yamaguchi points out is the elimination of single-use plastics that take thousands of years to decompose, such as disposable cups and straws or grocery bags.