Flying high to conserve the Cerrado

WWF-Brasil, supported by the WWF Network’s Forest Innovation Fund and the Kashmir World Foundation (KWF), has been conducting initiatives to conserve the Cerrado by using drones
© Felipe Spina/WWF-Brasil
Renata Peña

The native fruits of the Cerrado (Brazilian savannah) are highly nutritional and they have distinctive flavours, attracting the attention of renowned chefs around the world. Most importantly, growing and harvesting them allows the conservation of this biome – which has shrunk to 50% of its original size – by maintaining native trees and slowing down deforestation in the area.

With this goal in mind, WWF-Brasil, supported by the WWF Network’s Forest Innovation Fund and the Kashmir World Foundation (KWF), has been conducting initiatives to conserve the most biologically diverse savannah on the planet by using drones. The “Flying for Conservation” project recently landed at the Peruaçu Extractive Cooperative (Cooperuaçu) in Januária, Minas Gerais, to train 25 agroforestry workers on how to use drones as a monitoring and data analysis tool.

Drones will help to survey the region’s fruit trees, enabling the cooperative to better plan production and collection. It will also be possible to know how many fruit trees of a certain kind there are in a specific area, for example. The drones will take photos to generate maps and automatically classify data. In the specific case of Cooperuaçu, they will also monitor three native fruit species: buriti, pequi and coquinho azedo.

“Access to technology is very important for agroforestry workers. Drones can carry out a survey of species in no more than two hours that people on the ground would take up to two days to do”, explains WWF-Brasil conservation analyst Felipe Spina, who is responsible for the training.

This technology will also help to monitor fires, identify burned areas and restore degraded areas. Agroforestry workers have been trained to assemble, configure and repair drones, when necessary. “We use low-cost, open-technology drones because they are easier for Peruaçu’s workers to assemble and fix. Conventional models are expensive to buy and maintain, while getting spare parts is more complicated. Our aim is to facilitate access to technology”, Spina says.

Technology and traditional knowledge together for biodiversity conservation

Spina explains that drone technology is also a social tool: “Young people often want to flee the countryside and farming because they don’t think the profession is interesting. It’s great to see that the use of drones has been helping to attract youth to agroforestry and cooperative work. Keeping young people in the countryside, interested in agroforestry and collecting native fruits, is very important to the Cerrado’s conservation. We are bringing together older people’s traditional knowledge with young people’s ease with using technologies. They are working side by side, sharing their knowhow.”

WWF and the Veredas-Peruaçu Wilderness Mosaic
The Veredas-Peruaçu Wilderness Mosaic, located in northern Minas Gerais and southwestern Bahia, was recently expanded from 1.8 million hectares to more than 3 million hectares. It now encompasses 27 protected areas. The Mosaic is part of the Gerais region, immortalised by writer Guimarães Rosa, in which environmental diversity, featuring the endemic fauna and flora species of the Cerrado, lives with the rich cultures of traditional peoples. However, it has suffered from deforestation, fires and devastation.

WWF-Brasil has been operating in the region since 2010, with the support of the Critical Ecosystem Partnership Fund (CEPF) and Humanize Institute. Various initiatives have been conducted to promote the adoption of agricultural best practices, the implementation of social technology and agroforestry systems, and the strengthening of integrated management of Conservation Units and other protected areas. WWF-Brasil is also working on regional mapping initiatives, focusing on systematic conservation planning in the Cerrado and support for the sustainable harvesting of the fruits of the Cerrado by agroforestry cooperatives and community associations. It is also undertaking communication projects to help celebrate and promote the Cerrado.

WWF-Brasil, supported by the WWF Network’s Forest Innovation Fund and the Kashmir World Foundation (KWF), has been conducting initiatives to conserve the Cerrado by using drones
© Felipe Spina/WWF-Brasil Enlarge 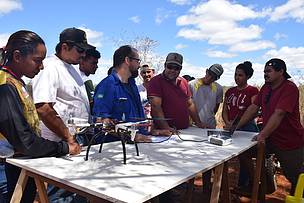 “Access to technology is very important for agroforestry workers", says WWF-Brasil conservation analyst Felipe Spina, who is responsible for the training.
© WWF-Brasil Enlarge 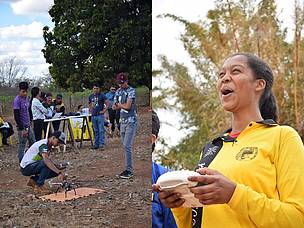 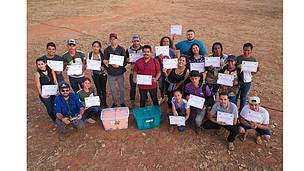