"Residents of the Forest" Series: New episode brings images of the giant armadillo, the largest and rarest armadillo of the world | WWF Brasil

"Residents of the Forest" Series: New episode brings images of the giant armadillo, the largest and rarest armadillo of the world 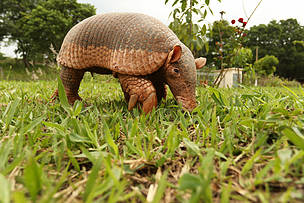 The Amazon’s armadillos are the protagonists of the eighth episode of the series "Residents of the Forest". The new set of unpublished and exclusive images captured at the Chico Mendes Extractive Reserve, in the state of Acre (AC), shows different species of armadillos and brings various curiosities about one of the most distinct animals of the Amazonian biome.

Among the animals depicted in the film are the Southern naked-tailed armadillo (Cabassous unicinctus), the Nine-banded armadillo (Dasypus novemcinctuo), the Greater long-nosed armadillo (Dasypus kappleri), and the giant armadillo (Priodontes maximus). They are shown digging, feeding, and even bathing! The images come from photographic traps installed inside the Resex.

One of the highlights of the material is the image of a giant armadillo (Priodontes maximus). Also known as "tatu-açú" or "tatu-canastra" in Brazil, they are the rarest of their family in the world. They can measure up to 1 meter in length and weigh more than 60 kilograms.

Giant armadillos have nocturnal habits and spend a lot of time under the ground – so images of them are difficult to find, and there are also difficulties to study them. Moreover, they are considered as one of the lesser-known mammals of Brazil, since there are few scientific studies about it.

The giant armadillo has low vision but a strong smell sense. Additionally, because of its large and strong claws that reach 20 centimeters, he is known as "the engineer of the ecosystem". Using its claws, he can dig deep holes, significantly altering the environment in which it lives.

Armadillos are Xenarthras mammals, belonging to the Cingulata order. They are characterized by their thick carapace, which serves as protection and shield. Due to their carapace, the name of the animal comes from the Spanish armadillo, meaning "small armor."

The origin of these animals dates back 80 million years. In fact, they are part of a rather separate group that divides common ancestors with anteaters and sloths. Native to the American continent, they cover a large area, from the United States to South America. Armadillos feed on termites, ants, larvae, small vertebrates, and vegetables.

The main threats to armadillos today are the conversion of native forests into crops and pastures, reducing the natural habitat necessary for the survival of this species, and hunting. They are also greatly impacted by major infrastructure works, which reduce their area of circulation, and by trampling on roads.

Notably, armadillos are also important for medicine. As one of the few animals other than humans capable of contracting leprosy, they are very important for the studies of this infectious disease caused by a bacterium called Mycobacterium leprae, or Hansen's bacillus. Possibly, people who hunt and eat armadillos are at greater risk of developing this disease.

The series of videos entitled "Residents of the Forest" aims to bring to the public new and exclusive images of the Amazon fauna – specifically, the species that live inside the Chico Mendes Extractive Reserve. Eight episodes have already been released, showing animals such as tapirs, anteaters, birds, monkeys, canids and, now, armadillos.

Photographic traps are used to monitor biodiversity in the extractive reserve that also develops forest management. This monitoring helps to understand if the animals that live in the area are being impacted.

"The management plan at Resex Chico Mendes covers an area of 20,000 hectares and involves 90 families. In the 2018 harvest, they produced about 5,000 cubic meters of logs in a reduced impact logging system that generates jobs and productive occupations that are very important to traditional communities," said one of the experts who accompany the forest management, WWF-Brazil Conservation Analyst Moacyr Araújo. 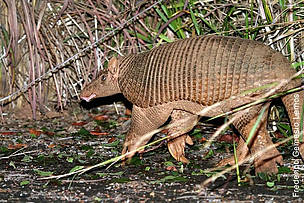 The giant armadillo (Priodontes maximus) is known as "the engineer of the ecosystem" - by digging, it substantially alters the environment in which it lives.
© ICMBio / Kennedy Aparecido Andrade Borges Enlarge 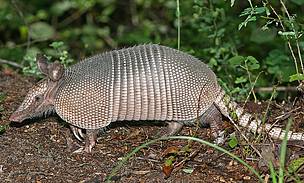 The Nine-banded armadillo (Dasypus novemcinctuo) is one of the animals portrayed in the video
© Tom Friedel/ Birdphotos.com Enlarge
Gostou deste artigo?