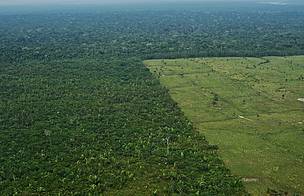 Zerar o desmatamento é plenamente possível e implicaria em custo baixíssimo à economia do Brasil.
© AFP
The Working Group (WG) for Zero Deforestation - composed by NGOs Greenpeace, Instituto Centro de Vida, Imaflora, Imazon, Instituto Socioambiental, IPAM, TNC, and WWF launched the report "A Pathway to Zero Deforestation in the Amazon" this Monday (13) at COP23 in Bonn. In the study, organizations indicate ways to eliminate deforestation in the Amazon in the short term, with environmental, economic and social benefits for all.

In the document, the WG argues that there is no longer any justifiable reason for the destruction of native vegetation in Brazil. Continuing deforestation results in an imbalance of the climate, destroys biodiversity and water resources, damages human health and, contrary to what many believe, compromises the competitiveness of agricultural production. In 2016, deforestation in the Amazon alone accounted for 26% of domestic emissions of greenhouse gases. Zero deforestation is therefore the fastest and easiest way to reduce emissions and comply with the Paris agreement.

The good news is that Brazil already knows the path to zero deforestation and knows how to get there. "The measures implemented in recent years (2005-2012) have cut deforestation rates in the Amazon by about 70% and indicate that the elements needed to achieve zero deforestation are present," the publication points out.

Frederico Machado, WWF-Brazil's public policy expert, says that stop deforestation is fully possible and imply very low cost to the economy of Brazil. “According to a recent study, this would impact the Brazilian GDP by less than 0.7%, by 2030. It would have a very positive balance when we put together all the environmental services that are maintained. The commitment of all sectors with zero conversion of what remains of the planet's natural ecosystems is urgent, with emphasis also on the Cerrado," explains Machado.

"Brazil already knows the path to reach zero deforestation, but has gone in the opposite direction. Temer and the Congress have been discussing and approving measures that encourage further deforestation, land grabbing and violence in the rural areas. If actions are not taken urgently, the scenario is that high rates of deforestation in the Amazon will persist," comments Cristiane Mazzetti, Amazon specialist at Greenpeace Brazil. "The road exists, but it is necessary that governments and companies seriously commit themselves to transforming the actions proposed in the document into reality, eliminating any form of deforestation in the short term," she adds.

"Thousands of people die or fall ill every year because of the smoke from the forest fires associated with deforestation. We already know what to do to eliminate deforestation and save these lives and avoid diseases. Now it takes courage to act, "Paulo Barreto, a senior researcher at Imazon.

"The end of deforestation in the Amazon and forest conservation today represent the best investment that agriculture can make in favor of its future productivity. Forests are great crop irrigation systems. We not only talking about producing without deforesting, but producing more and better, conserving the forests of the region", Paulo Moutinho, IPAM researcher.

The pathway for zero deforestation, according to the organizations, involves several sectors and implicates four lines of action: For the ZDWG, changes in the agricultural production system, the fight against encroachment of public lands, market action and incentives for a forest economy are among the most urgent actions to eliminate deforestation, indicated in the study: The report also reinforces the importance of the society mobilization against recent attempts to weaken forest protection, such as easing environmental licensing, reducing the protection of Conservation Areas, halting the demarcation of Indigenous Lands and conceding amnesty to the illegal grabbing of public lands - generating a profit of R$19 billion for encroachers.