An Inside View of Matopiba

The MATOPIBA region is Brazil’s current agricultural frontier. In recent years, its native vegetation has been in large part cleared for soybean and livestock farming.
The Cerrado biome is the largest Savannah region of South America and accounts for the richest biodiversity on Earth, with 44% of endemic plants. It is also the second largest natural formation of the continent and covers one quarter of the Brazilian territory, 2M km² (over 770 square miles) - equal in size to the combined territories of Spain, France, Germany, Italy and the UK. The Cerrado constitutes a third of Brazil’s biodiversity and is considered a ‘cradle of waters’ since it is critical to eight of the 12 Brazilian river basins. The headwaters of all southern tributaries of the Amazon River (except for the Juruá and the Purus), as well as several rivers in the states of Maranhão and Piauí, is in the Cerrado.

This brochure is a compilation of data about a specific area of the Brazilian Cerrado in the states of MAranhão, TOcantins, PIauí and BAhia, or MATOPIBA. The MATOPIBA region is Brazil’s current agricultural frontier. In recent years, its native vegetation has been in large part cleared for soybean and livestock farming. Brazil’s Forest Code legally allows for clearing up to 80 percent of areas covered by rural properties in the Cerrado, so there is a legal shield for continued and dramatic conversion of native habitat for agriculture.

Several factors may accelerate the current trend of clearing MATOPIBA lands in 2017 and the coming years: an increase in rainfall after 5 years of drought (resulting in increasing profits and returns for producers); improvements in the Brazilian economic situation; new regulations that permit land purchases by foreigners; an increase in the competitiveness of Brazilian soy; and possible changes in the licensing regime for livestock farming.

MATOPIBA is currently the target of intense property speculation. Recent studies about key municipalities in this region indicate an average price increase of about 2,000 percent between Cerrado lands in 2005 and cleared lands in 2016. Our aim is to foster intersectoral dialogues about the future of MATOPIBA region to facilitate the consideration of not only economic but also social and environmental factors.

We here present key social, economic and agricultural data painting a picture of current threats and opportunities for the region. We seeks to show that soy and beef commodities may be produced in MATOPIBA without destroying the Cerrado’s uniquely biodiverse habitats and ecosystems.

The MATOPIBA region is Brazil’s current agricultural frontier. In recent years, its native vegetation has been in large part cleared for soybean and livestock farming.
© WWF-Brasil 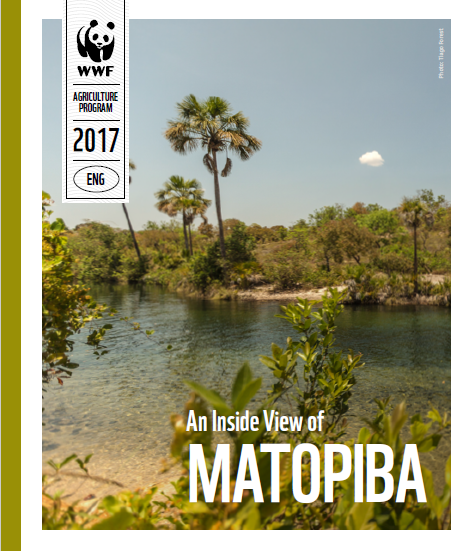 The MATOPIBA region is Brazil’s current agricultural frontier. In recent years, its native vegetation has been in large part cleared for soybean and livestock farming.
© WWF-Brasil
Download
An inside view of Matopiba
PDF 3.64 MB
DOE AGORA
DOE AGORA