The “Big Five” of the Cerrado 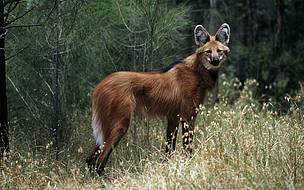 Lobo-guará (Chrysocyon brachyurus)
© Martin Harvey/WWF-Canon
The vastness and location of the Cerrado makes it strategically important. Apart from connecting three countries (Brazil, Bolivia and Paraguay), it links four of Brazil’s five biomes - the Amazon, Caatinga, Atlantic Forest, and Pantanal – and shares many plants and animals with these regions. It also harbours many unique species, many of which only exist here, making this region - which occupies one-quarter of the area of Brazil - the world's most biologically rich savannah.

There are 5,487 species of mammals in the world. Brazil is second in the global rankings of total number of mammal species, with 700 species, while one in three of the country’s mammal species can be found in the Cerrado.

Apart from loss of habitat, the main threats to the survival of wildlife in the Cerrado are illegal hunting and forest fires.

According to Julio César Sampaio, coordinator of WWF-Brasil’s Cerrado/Pantanal Programme, “The Cerrado is disappearing at an alarming rate, giving way to agriculture and extensive cattle ranching. This form of natural resource exploitation has resulted in serious threats to the survival of at least 137 species of fauna (22%), including the Maned Wolf, Jaguar, Giant Anteater and Giant Armadillo, which are flagship species and threatened with extinction”.

Learn more about the “Big Five” of the Cerrado.

The Jaguar is the largest cat species in the Americas and is at risk of extinction in Brazil. It inhabits preserved environments, close to permanent sources of water and large quantities of prey.

It is listed as Near Threatened (NT) on the IUCN Red List of Threatened Species, which means that under current conditions it is likely that it will be classified as threatened with extinction in the near future. On the Brazilian Red List the Jaguar is classified as vulnerable and is considered to be facing a high risk of extinction.

The main threats to this species are deforestation and hunting. Deforestation reduces the amount of habitat both for the Jaguar and its prey, and hinders gene flow and promotes inbreeding. The species is often persecuted by man because it attacks livestock.

The Giant Armadillo, is the largest and rarest species of armadillo in the world. It can be up to 1.5 m long and weigh up to 60 kg, and males are larger and heavier than females.

Researchers consider the Giant Armadillo to be an “ecosystem engineer”, because its burrowing alters the physical environment and creates new habitats. It is typical to the Cerrado, but can also be found in the Pantanal, Atlantic Forest and Amazon.

The Giant Armadillo is nocturnal and semifossorial (spending part of the time underground), which means it is difficult to observe and study. Little research has been conducted into its breeding habits, but studies show that the Giant Armadillo has a five-month gestation period and gives birth to one young.

The species is threatened with extinction and currently classified as Vulnerable (VU) on the IUCN Red List and Critically Endangered (CR) in various states. Loss of habitat and hunting have been the main reasons for the drop in population over the last 25 years. The Armadillo is much sought after by hunters for its meat and leathery armour shell used to make utensils.

The Tapir is the largest terrestrial mammal in South America. It reaches a height of 1 meter, is one meter long and can weigh up to 300 kg. Its most distinguishing feature is its long and flexible snout like an elephant's trunk.

The Tapir feeds on leaves, fruit, aquatic plants, twigs, grass and stalks, which are digested thanks to the presence of microorganisms in its digestive system. It is a solitary animal and largely nocturnal.

It is a good swimmer, even in large rivers. In the forest it habitually uses the same trails, which makes it more vulnerable to hunting. Its natural predators are big cats, such as the Jaguar and Puma, which mainly attack their young. The Tapir has a 380-day gestation period and gives birth to one young.

The species is classified as Vulnerable (VU) on the IUCN Red List and Endangered (EN) in the Cerrado. The main threats to this species are habitat loss, hunting and declining and isolated populations.

This species is easily recognisable by its characteristic coat, with a broad diagonal black stripe flanked by white borders that runs from its chest over its shoulder halfway down its back.

It can reach up to 2.20 m in length and weigh up to 45kg and has a long thick bushy tail and long elongated snout. It uses its huge front claws to dig up anthills and termite nests and captures up to 30 thousand ants and termites a day with its long extendible tongue. Because it only feeds on ants and termites it has no teeth.

It can be found in open grassland, cerrado and forests, but is most common in cerrado. Because of its versatility, the giant anteater can be found in most of Central and South America. It was originally present in all 27 Brazilian states but presently it is under the threat of extinction in all regions of Brazil and has already disappeared from the states of Rio de Janeiro and Espirito Santo.

The main causes of population decline are the degradation and destruction of its habitats; however, hunting, road accidents and forest fires have also helped top put the Giant Anteater on the list of species threatened with extinction.

The Maned Wolf is the largest canid in South America. It weighs between 20 and 30 kg and its red coat and long, thin legs make it immediately recognisable.

It feeds mainly on small rodents, birds and fruit, especially the wolf apple (Solanum lycocarpum). It prefers open vegetation, such as grasslands and wetlands. It can often be observed in agricultural areas close to native vegetation, as long as there is enough food. It generally avoids forests, but may use them as shelter and refuge.

The Maned Wolf is found in open areas in the central region of South America which spans across part of Brazil, Argentina, Paraguay, Bolivia and Peru.

There are less than 25,000 Maned Wolves in the world, 20,000 of which are in Brazil. The species is classified as Near Threatened (NT) on the IUCN Red List, which means that under current conditions it is likely that it will be classified as threatened with extinction in the near future. On Brazil’s Red List, the Maned Wolf is considered threatened with extinction in the category Vulnerable (VU).

The main threat to this species is habitat destruction, which, apart from reducing the amount of available natural area, leads to the isolation of populations, which is detrimental to species survival in the long term.

WWF-Brasil in the Cerrado

WWF-Brasil’s Cerrado/Pantanal Programme has been developing the Projeto Sertões since 2010. The first phase of the project (2010 to 2014) focussed on fostering good agricultural practices, the implementation and integrated management of protected areas, communication, aimed at raising awareness of the importance of the Cerrado, and land use planning geared towards systematic conservation planning of the Cerrado. In the second phase of the project (2014 to 2018) actions will be expanded to strengthen WWF-Brasil’s support for sustainable extractivism of fruits of the Cerrado.