Indigenous protesters stand up for their rights in Brasilia 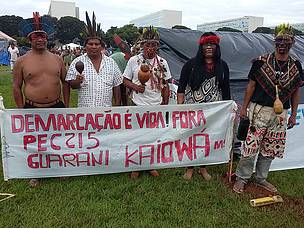 A group of around 1,200 indigenous leaders are holding a protest in the capital of Brazil.
© Rodrigo Siqueira
Jaime Gesisky

A group of around 1,200 indigenous leaders are holding a protest in the capital of Brazil. The mobilisation, called for by the National Articulation of the Indigenous People of Brazil (APIB), brings together indigenous peoples, allied organisations and partners from civil society in an action that will go on until Thursday (16 April). The Acampamento Terra Livre (the "free land" camp) is being held together with a series of other activities across Brazil in an aim to draw public attention to the current threats to indigenous peoples’ rights in the country, particularly those stemming from the actions of the government and the National Congress.

The main threat coming from parliament is the Proposed Constitutional Amendment (PEC) 215/2000. This measure proposes to change the federal constitution and transfer powers to demarcate indigenous and Quilombola lands and create protected areas from the executive branch to the National Congress, completely going against the founding principles of the Magna Carta of 1988.

The Acampamento Terra Livre is the largest national indigenous mobilisation in history in Brazil. Apart from reaffirming the cultural strength and diversity of these peoples – which still exists even after the violent process of civilization suffered by indigenous peoples since the discovery of Brazil – the movement also aims to pressure the government on international laws such as the International Labour Organization Convention (ILO-convention 169), which ensures the consultation and participation of indigenous peoples in decisions that directly affect their territory, and the United Nations Declaration on the Rights of Indigenous Peoples.

A press note released by the APIB states that “the attack of these rights is an affront to Brazil’s democratic system, since it sets a precedent for undermining other rights conquered by national society through political manoeuvring to benefit the shady special interests of small groups”. It continues by saying “indigenous peoples have shown that they will no longer back down to these attacks”.

Watch the video with the protesters:

A group of around 1,200 indigenous leaders are holding a protest in the capital of Brazil.
© Rodrigo Siqueira Enlarge
Gostou deste artigo?