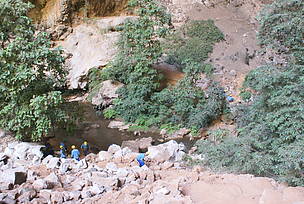 Workers make the trail paths so that tourists can visit the Peruaçu Caves
© Julio Cesar Sampaio / WWF-Brasil
Located in the Sertão Veredas-Peruaçu Protected Areas Mosaic in the north of Minas Gerais state, the Peruaçu Caves National Park is one of the various protected areas of outstanding natural beauty in the region. The rock paintings on the walls of the caves date back 10 thousand years and features like the Janelão (Big Window) and the various beautiful caves rich in biodiversity are attractions largely unexplored by the general public. The Park was created in 1999 but to date it has not been opened to tourism. Work on tourism infrastructure, however, has now begun and is scheduled to finish in July 2014. Altogether there will be six itineraries for visitation and eight of the caves will be open to the public.

WWF-Brazil supports socio-environmental development in the Veredas Peruaçu Mosaic by unfolding conservation actions in alliance with various institutions under the aegis of its Cerrado-Pantanal Programme. In the Peruaçu Caves National Park we have a partnership arrangement with the Biotropics Institute for the purpose of monitoring large and medium-sized mammals of the Cerrado, as well as the work in the Peruaçu River basin being undertaken by our Water for Life Programme.

Three major activities are being carried out as part of the Executive Project "Roads and Trails", namely: trail management activities, tourism facilitation equipment installation, and sign placing. The course of the trails will be corrected and adapted and the facilitating equipment and signs showing the way and with warnings or information will be placed along trails and roads, in buildings and at visitation points. There will also be signs in other languages to guide foreign visitors.

Opening the National Parks to visitation is foreseen in the terms of Act 9.985/2000 which established the Brazilian Protected Areas System (SNUC is the Portuguese acronym) and it makes provision for the implementation of areas for use by the public within Protected Areas in the category "Strict Protection" in this case, the Peruaçu Caves National Park (PCNP).

"In this way we hope to contribute towards stimulating tourism activities in the north of Minas Gerais and more specifically in the micro-region of Januaria”, declares Evandro Pereira da Silva, head of the PNCP which is administered by the Chico Mendes Institute for Biodiversity Conservation (ICMBio).

The infrastructure works involve a Water Supply sysem and an Effluents Treatment Unit; refurbishing buildings and other structures; and tourism facilitating equipment and sign installation. All of the actions are in compliance with the Management Plan elaborated for the PNCP in 2005, which is a technical document that covers the entire Protected Area, its surrounding buffer zone and ecological corridors. It also sets out measures to be taken to foster its integration in the economic and social lives of the neighbouring communities.

The Ekos Brazil Institute is responsible for the management of the contracted infrastructure works and the future activities will be supervised by the ICMBio’s regional coordinating body in Lagoa Santa. Some of the initiatives being unfolded in the protected area are under the aegis of a Federal Government Programme the PRONATEC administered by the Januária campus of the North Minas Federal Institute (PRONATEC/Instituto Federal do Norte Minas) which will be providing the capacity building courses for tourist guides drawn from the communities in the areas surrounding the park (25 students from Fabião I, Fabião II, Vargem Grande, Levinopolis e Riacho da Cruz, in the municpalities of Januaria and Itacarambi in the state of Minas Gerais)

Itineraries that will be offered to the public: 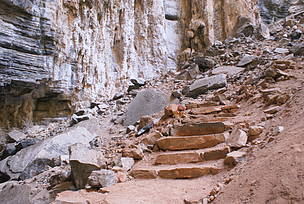 Before installing the steps, visitors had to crawl over the rocks to reach the caves
© Julio Cesar Sampaio / WWF-Brasil Enlarge 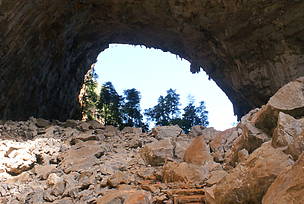 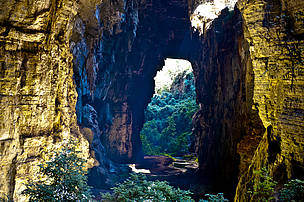