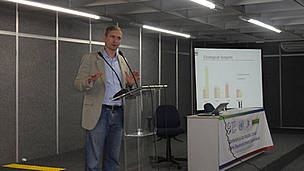 Michael Becker, WWF-Brazil´s Cerrado-Pantanal coordinator, in the launching of the Ecological Footprint for the city and the state of São Paulo, at Rio +20.
© WWF-Brasil/Jorge Eduardo Dantas
By Geralda Magela
From Rio de Janeiro

The study conducted by WWF-Brazil with the collaboration of the governments of the state and the city of São Paulo was presented on June 13th, during the Rio + 20. The information contained in the study will be used to design mitigation and mobilisation actions to reduce the impacts on the environment stemming from consumption.

Ecological Footprint – The Ecological Footprint method is a form of environmental accounting that evaluates the pressures human populations put on natural resources. The values are calculated in global hectares (gha) making it possible to compare different consumption patterns and verify whether they are within the planet’s ecological capacity to sustain

The calculation has already been widely made for countries and individuals and now it is beginning to be made for cities too. Last year WWF-Brazil, in partnerships with the municipal authority and other local partners carried out the Ecological Footprint study for the city of Campo Grade (capital of Mato Grosso do Sul), the first Brazilian city to undertake the calculation.

The work in São Paulo was supported by the Ecossistemas organisation and by the Global Footprint Network (GFN), which is responsible for the Ecological Footprint methodology. The Economic Research Institute Foundation (FIPE) also made an important contribution by making data available from its databases.
.
Megalopolis – São Paulo is the biggest city in Latin America and the figures associated to it are impressive. The Brazilian Geography and Statistics Institute registers the population of the capital itself as 10.8 million inhabitants but if the 38 municipalities that make up the greater São Paulo metropolitan area are included, the figure goes up to around 19 million, almost the population of Chile.
In turn, the state of São Paulo has a population of 42 million and is Brazil’s biggest consumer market. It also responsible for 47% of all vehicles produced in Brazil and contributes a huge 33% of the Brazilian GNP.

Footprint - Given the extraordinary dimensions of São Paul state and city, the study includes some innovations. In addition to calculating the average footprint per inhabitant, the analysis was made according to family income brackets, divided into seven categories representing multiples from 1 to 40 of the value of the official minimum salary (from US203 to US5.70). Thus it was possible make a more precise analysis of the impact of each consumer class in the composition of the city’s footprint and that of the state.

Compared to the Brazilian average figure, the Ecological Footprint of São Paulo city is 49% larger and it is 25% larger than that of São Paulo state. In turn the state’s footprint 20% larger than the Brazilian average, which is 2.93 global hectares per person (the equivalent on a global scale of 1.6 planets). The world average footprint size is 2.7 global hectares (1.5 planets).

WWF-Brazil’s coordinator for the Cerrado-Pantanal Programme Michael Becker made the presentation and reminded the audience that the Ecological Footprint calculation is an important step insofar as it allows for many different readings of city realities. It also raises many issues and challenges such as how to ensure that people in low-income brackets enjoy a better standard of living and do so without exhausting natural resources even further. “The Ecological Footprint concept contributes supporting elements to such discussions”, he declared. Becker also underscored how important it is for the people of São Paulo to do their part and shoulder their responsibilities alongside governments and companies. “I would really like to see the Ecological Footprint being adopted and used as an indicator by the Federal, State and Municipal spheres of government alike”, said Becker.

Consumption categories – The study also analysed the footprint according to consumption categories. The category that contributed most to footprint size was food, responsible for almost half the city dwellers’ footprint and 38% of that of the state inhabitants. Agricultural resources and grazing land suffer the heaviest pressure from food consumption but in the category food, it is actually pastures that are responsible for boosting the footprint size, mostly because of Brazilian eating habits which include a lot of meat, especially beef, hence the elevated food footprint.

Consumer goods are responsible for 23% of the state population’s footprint and 21% of that of resident’s in the capital. Transport contributes 14% (state residents) and 10% (capital residents). This last consumer category is highly demanding in terms of ecological resources, particularly in areas needed to absorb greenhouse gas emissions stemming from fuel consumption.

The services category answers for 6% of the average Ecological Footprint of people in the state and 5% of the city residents’ footprint and their footprints for this category are 46% and 58% higher than the Brazilian average, respectively. Most of the pressure from the population’s consumption of services falls on agricultural and grazing land, and on forests for CO2 absorption.

Head of the São Paulo state government’s Environment Department Bruno Covas stated that the results have revealed how large the state’s footprint is big and that situation needs to be changed. “By consuming more resources than nature is capable of replenishing, we are actually de-capitalising ourselves” he insisted. In his view the data set out in the Ecological Footprint study will be highly important in enabling the state to design and execute its environmental education work and adopt appropriate mitigation actions to reduce those impacts. Carlos Fortner, Head of the Environment Department of the São Paulo municipal authority observed that “The data now need to be assimilated and an effort will be needed to mobilise for the adoption of mitigating actions”. In his view, the study is an important tool the government now has for working with environmental education and adopting mitigation actions.

WWF-Brazil CEO Maria Cecília Wey de Brito thanked the two heads of department for their presence in the launch of the study and for the willingness they had shown to undertake the Footprint work in partnership with WWF-Brazil. In her view, the Ecological Footprint study is in harmony with WWF’s institutional principle of always basing itself on reliable scientific information. “Most of our actions are in the spirit of collaboration but there are moments when denunciation is needed too, as has been the case with the Forest Law ”, she said.

According to her, the Ecological Footprint offers administrators a range of valuable information that enables them to carry out long-term planning. To do so however means embracing a more far-reaching vision of the future, but firmly based on sound knowledge. “ We wish that to be done on in a systematic manner”, declared the CEO. Maria Cecília underscored the need to question the way we are using our natural resources. “Are we really going to stop eating as much meat as the mapping done by the Ecological Footprint shows we do?” she asked. “The Ecological Footprint helps us to reflect on such habits. It must be remembered when by exhausting the planet’s natural resources we are putting very existence in jeopardy. The planet, however, will remain”, she concluded.

According to study results, almost half the bio-capacity of the state (49%) is associated to its agricultural areas. The productivity of São Paulo state agriculture is 35% higher than world average figures. São Paulo’s forests are even more productive, achieving average yields 150% greater than the global average for forests.
While the bio-capacity per person may appear to be small for the city of São Paulo, the total equivalent area actually amounts to 450 thousand global hectares. Most of that is in the form of built up areas that provide housing for its inhabitants but there is also considerable bio-capacity associated to its forests in parks and protected areas.

About the Ecological Footprint

The Ecological Footprint of a country, state, city or even of a person corresponds to the amount of productive land and sea needed to produce and sustain a given style of living. It is a way of translating into hectares the territorial expanse that a person or a population or a city, state or country ‘uses’, on average, to sustain the way their ways of eating, dwelling, and moving around, among others.

The footprint is expressed in global hectare (gha) making it possible to compare different consumption patterns and check whether they are within the planet’s ecological capacity to sustain them. A global hectare is one hectare with the global average productivity of productive lands and seas in a given year. Bio-capacity is the ecosystems’ capacity to produce useful renewable natural resources for human consumption and to absorb the residues and waste generated by the population’s activities.

. The Ecological Footprint is not a precise measurement but an estimate. To calculate footprints, the various categories of productive terrains need to be studied (agricultural land, grazing land, oceans, forests , built up areas) as well as the various categories of consumption (food, housing, electricity, goods and services, transport and others). The technologies involved, population sizes and other data are also taken into account.

Using specifically designed tables, each category of consumption is converted into an equivalent area expressed in hectares. The areas that are needed to absorb waste and residues are also included, as well as areas of land and water area corresponding to the needs of nature itself, that is to say for the vegetation and the wildlife and the ecosystems they live in, so as to ensure the maintenance of biodiversity

Michael Becker, WWF-Brazil´s Cerrado-Pantanal coordinator, in the launching of the Ecological Footprint for the city and the state of São Paulo, at Rio +20.
© WWF-Brasil/Jorge Eduardo Dantas Enlarge 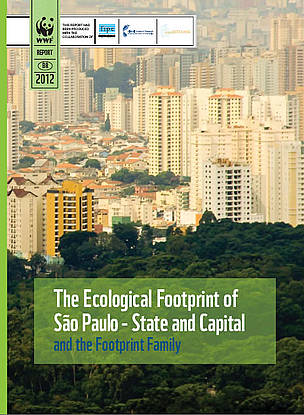