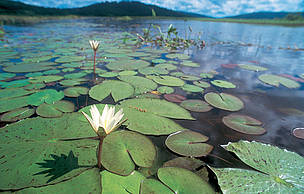 In spite of its incalculable environmental importance to the planet as a whole, as the home of an infinity of known and unknown plant and animal species; as a regulator maintaining the equilibrium of the global climate; as a source of raw materials,  food, medicines, forest products and minerals, the Amazon is threatened by innumerable predatory activities such as logging, mining, infrastructure works and the clearing of forest land to make way for agriculture and pastures.

WWF-Brazil is commemorating this fifth day of September, officialised in Brazil as Amazon Day, by presenting the stories of farmers and traditional populations that are attempting, in spite of all the difficulties they face, to conciliate their productive activities with the need to conserve this precious environmental asset. Find out how the fishermen of Manoel Urbano in the state of Acre gain their livelihoods and how climate change is affecting their way of life.

The Amazon is still largely unknown and has many surprises in store, like the new primate species belonging to the Callicebus genus previously unknown to science and discovered recently by the WWF-Brazil expedition to the north-western region of Mato Grosso state.

The Amazon is one of humanity’s most precious natural heritages.
© Roger Leguen / WWF Enlarge