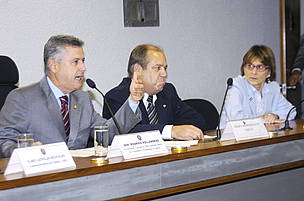 Senate hearing to discuss Forest Law reform, organised as a joint session of the Senate Standing Committees for the Environment, Consumer Defence, Inspection and Control; and the Committee for Agriculture and Agrarian Reform.
© Marcia Kalume / Agência Senado
Representatives of the scientific community delivered a simple, straightforward message to the Federal Senate this morning (Tuesday, July 5): the text of the Forest Law Reform Bill approved by the House of Representatives and now before the Senate “will jeopardise the Brazilian people’s environment. Some stretches of the text will lead to intense environmental damage,” stated professor Ricardo Rodrigues of Luiz de Queiroz Superior School of Agriculture.

He was one of the six scientists representing the Brazilian Society for the Advancement of Science (SBPC) and the Brazilian Academy of Sciences (ABC) at a Senate hearing to discuss Forest Law reform. The hearing was organised as a joint session of the Senate Standing Committees for the Environment, Consumer Defence, Inspection and Control; and the Committee for Agriculture and Agrarian Reform.

At the beginning of the year, the SBPC and the ABC released a study entitled – Science and Forest Law: contributions to the dialogue – in which they made a detailed analysis of impacts the reform proposals would cause, but none of their analysis was considered in the text approved by the House of Representatives.

Nobre also stressed that the provisions in the reform bill concerning protection for the strips of protected vegetation that accompany water course do not fully attend all organic preservation needs. “As an example, the Forest Law, as it stands, makes no provision for protecting swamps” the researcher pointed out.

Inland swamps, mangrove swamps and riverside várzea areas subject to flooding and all the other kinds of wetland are important because of the rich biodiversity they host and the ecological functions they perform. Wetland biodiversity includes amphibians; a group in which Brazil is the world’s vice-champion in terms of species; and at the same time, a group highly threatened by climate change. Among the vital ecological functions of wetlands are their contribution to aquatic life cycles and their moderation of flooding due to their power of retaining the waters.

Celso Manzatto, Head of the Environment Division of the Brazilian Agriculture and Livestock Research Corporation – Embrapa, and a researcher himself, stated that the new Forest Law needed to address what he called, “the biggest villain of all,”: soil erosion. “That is the main impact stemming from agriculture,” he explained to the senators.

“Our soils took millions of years to form. Losing them and leaving only degraded areas in their place with the very lowest levels of agricultural productivity should be treated as a crime against our national heritage,” added Claudio Maretti, leader of the WWF Network’s Living Amazon Initiative.

Some particular environments and vegetation types, especially those that accompany the banks of water courses or that are found on steep slopes or hilltops, are highly important in preventing erosion. “All rural landholders must protect them and they also need to adopt good practices in cultivating the land  such as contour ploughing and planting, maintenance of the soil biota, rotation of crops, attention to drainage and others,” explained Maretti.

The Forest Law reform bill, now being analysed in the Senate, was approved in the House of Representatives in May. The representatives’ text runs directly contrary to the views of the scientific community, of socio-environmental organisations, and even public opinion, as a recent poll run by the Datafolha Institute in June has shown. The public opinion poll showed that most people do not agree with the main provisions of the text. 85% declared that priority should be given to protecting the forests and rivers, not agriculture and livestock production.

Another revelation of the poll’s was that only 5% of the population agrees with the proposal to remove the obligation that illegally deforested areas to restore natural vegetation, even if they had done so to increase production.

The population also disagreed with the proposal for an amnesty on all fines due for illegal deforestation. One of the proposals in the new Forest Law is that all landowners that carried out illegal deforestation before June 2008 should be exonerated from fines or any other form of punishment. The Datafolha poll asked interviewees whether they were, “in favour or against pardoning the fines and penalties,” and 79% of those interviewed declared that they were against pardoning the fines. The same percentage also declared that if such an amnesty were approved by the Senate, President Dilma should veto it.

The survey also showed that voters are not inclined to give their votes to any parliamentarian that voted in favour of pardoning the fines and punishments foreseen for offending land proprietors. 84% of the people interviewed declared they would not vote for them ever again.

The Forest Law Reform bill continues its process of analysis in the Senate and on Wednesday June 6 there will be another hearing, this time before the Standing Committee for Science and Technology. Once the cycle of Committee hearings has been completed, it will go before a plenary session of the Senate to be voted. Senators hope that the whole process will be finalised before the end of the year. Should they decide to alter it in any way, it will have to go back to the House of Representatives to be reviewed once more.

We hope that the Federal Senate will listen to the voice of society and provide more space for constructive discussions, based on scientific knowledge, and with an eye on Brazil’s interests and its great potential as a leader in the field of green economy; while at the same time continuing to guarantee food production, but seeking out the best markets for products of the highest environmental and sanitary standards. Furthermore, the Forest Law should contemplate Brazilian society’s many other interests, like the potential for sustainable exploitation of its forests, ecotourism, defence of Brazilian culture and minimising the more drastic impacts stemming from climate change,” declared the leader of the Living Amazon Initiative.