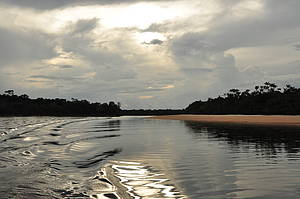 Sunset on Jauaperi.
© WWF-Brasil / Ligia Paes de Barros
This Monday, July 4, 2011, completes the tenth year since a group of riverside communities situated on the boundaries between the states of Roraima and Amazonas called, for the first time, on the Brazilian Environment Institute Ibama to create the Lower Rio Branco–Jauaperi Extractive Reserve (Resex). At the time the communities were concerned to preserve an area that was threatened by intensive predatory fishing and illegal hunting of turtles that had led to a scarcity of fish and affected their daily lives. The process for creating the protected area however has been stuck in the drawers of federal government bodies since 2006 and up until today those traditional communities have received no response.

The area of 634 thousand hectares requested for the Resex is divided between the municipalities of Rorainopolis in the State of Roraima and Novo Airão in the state of Amazonas, and the federal government itself has classified it as a priority area for conservation. About 100 families live in the area, making a living by extracting forest products like Brazil nuts, copaiba oil,  natural fibres and fish. The waters of the rivers that bound the region - Jauaperi, Rio Branco and Rio Negro vary from crystal clear to white and almost black and there are at least 42 different species of mammals inhabiting the area (10 of which are on Brazil’s endangered species list).

On July 4, 2001, members of the communities  of Santa Maria Velha, Vila da Cota, Remanso, Itaquera, Floresta, Samaúma and Xixuaú, in the municpality of Rorainóplis, Roraima, handed in a petition to Ibama requesting the creation of the Lower Rio Branco-Jauaperí  Extractive Reserve.

Later the Tanauaú, Palestina, Gaspar and São Pedro communities situated on the left bank of the Jauaperí, the Amazonas state municipality of Novo Airão, added their names to the request for an extractive reserve. The idea was to safeguard the region’s natural resources, especially the fish stocks and the turtle populations, which were coming under intense pressure from commercial fishing boats entering the region. In spite of all the time elapsed, the reserve has still not been created.

In the years that followed the petition, other bodies lent their strength to the initiative: the federal body Chico Mendes Institute for Biodiversity (ICMBio) carried out studies to support the creation of the protected area. After they were concluded the federal government’s Amazon Protected Areas programme (ARPA) gave its support to enable socio-environmental studies to be concluded and also supported workshops to raise public awareness and sensitivity, as well as a public hearing. From then on, other institutions like WWF-Brazil, the Vitória Amazônica Foundation (FVA) and the Socio-environmental Institute (ISA) have been supporting the creation process, mobilising residents and getting the government to listen to them in the search for solutions to the conflicts that have been breaking out increasingly since then.

In 2006, the legal procedures were set in motion in the Ministry of the Environment and the process was then forwarded to the Civil Office of the Presidency. Since then it has not moved forward. Still in 2006 a fishing agreement was drawn up and signed by residents in the region to prohibit commercial fishing and the capture of turtles – the visible reduction of those resources was already making commercial exploitation unfeasible and the scarcity was also affecting the communities’ subsistence condition.

The agreement stipulated those areas where commercial fishermen from outside would be allowed to fish and those where the communities would be allowed to fish. It also foresaw that in three years time a monitoring study would be conducted to define the situation of the fish stocks and the feasibility of fishing activities. That was never done and the result was a further intensification of the presence fishing boats, Some community leaders that oppose them and are in favour of conservation were, and continue to be threatened by them.

Community leaders then resolved to call on Ibama and move a legal action in the courts to enforce the agreement. After listening to various people in the region, Judge Marcio Luiz Coelho de Freitas, of the Second Jurisdiction of the Courts of the State of Amazonas decided, as a precautionary measure, to maintain the fishing conditions established in the  agreement just as they were up to April 28, 2009, until the study of the fisheries had effectively been carried out. Nevertheless, invasions, threats and the absence of any kind of surveillance or inspection have continued.

Parallel to those events, in 2008 and 2009, there were two big mobilisations in Brasília. Members of the communities in the lower Rio Branco and the Jauaperí river went to the federal capital with support from the Rio Negro Network to demand an explanation from the authorities regarding the long delay in creating the Extractive Reserve. Audiences were held in the House of Representatives and in the Office of the Federal Public Prosecutor. Furthermore, in the last two years a series of letters, official documents and requests for explanations has been sent in to the respective federal government bodies in Brasília.

With so many difficulties holding things up, the environmental and social problems have not only persisted, but have gradually got worse: in 2006 an Ibama inspector was assassinated in the region when he was trying to stop the illegal catching of turtles, and in 2008 the president of a local association  and an outspoken defender of the Extractive Reserve had his home criminally burned to the ground. The illegal fishermen and turtle hunters are still in the region, threatening local residents and disrespecting the fishing agreement of 2006.

That is why there is a consensus in the region that the creation of the Lower Rio Branco-Jauaperi Extractive reserve is an increasingly urgent necessity. Mauro Armeli, coordinator of WWF-Brazil’s Amazon Programme declared that the delays in publishing the decree instituting the Reserve are jeopardising environmental work that has been going on for years and leaving the local families in a highly vulnerable situation. “Any failure to create the Reserve would be a very serious step backward because it would mean that former achievements like the fishing agreements would lose their powers of mobilisation,” he said.

The executive coordinator of the Vitória Amazônica Foundation (FVA), Carlos Durigan, agrees that it is an urgent necessity. “This is an old story already. We have made many demonstrations, sent in official letters to the authorities, but almost nothing has been done. The delay is harmful to the local communities who are subject to pressure from the fishing industry, and pressure from those interested in land tenure in the region who do not want to see the Reserve implemented at all, so that they can be free to put the lands to other uses,” he explained.

The president of the Xixuaú cooperative, Elton Leite da Encarnação, 33, said that the community felt that it was being treated unjustly by the public authorities. Elton, who has been engaged in the environmental work since 1991 said that the reason that the communities have at least a minimum of infrastructure today is exactly because of the conservation work that has been done. “We have boats, a health clinic, a school, solar energy panels, and broad band Internet... I cannot understand why our request is not being granted,” he exclaimed.

At the Meeting in Defence of the Forest, of the Peoples and of Sustainable Production that took place in 2011 in the Amazonas state municipality of Parintins, Brazilian Environment Minister Izabella Teixeira mentioned the Lower Rio Branco–Jauaperi Extractive Reserve as one of the protected areas that might be created on June 5, but the date has passed, and there has been no Decree to create the Reserve published so far.

Recently, several threats have appeared to the area where the Reserve is supposed to be created. A court decision seeks to dispossess the Xixuaú community of the land it occupies, supposedly because it lies within  the intended area of expansion of a Protected Area. The Indigenous reserve of the Waimiri-Atroari has also been threatened by legal actions to ‘restore possession’ moved by bodies of the state government of Roraima and in March, the Office of the State Public Prosecutor revealed that ‘Lands Institute” of Roraima was donating federal lands without any technical or legal support or justification, or even geo-referencing them.

Why is it important to fight for the Extractive Reserve?

The area where the reserve is to be created is endowed with a great diversity of plants, fish and animals. Assai palms, andiroba, Buriti palms, Brazil nut trees and wild plum trees are all common as well as that hardest of woods, the massaranduba and many kinds of creepers and lianas. Studies have identified more than 40 mammal species in the region. Ten of them are on the Brazilian endangered species list. Typical animals are the puma, the ocelot, the giant anteater, the freshwater manatee and turtle species like the tracajá, irapuca and giant Amazon turtle. Common fish species are jaraqui, pacu, acari, armoured catfish, peacock bass, the flat-whiskered catfish and the piranha.