"Environmental legislation is no obstacle for agriculture and cattle ranching", says producer in Acre 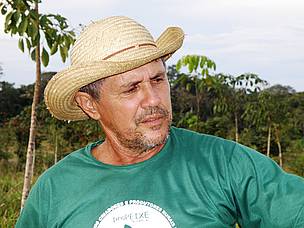 Paulo Sérgio Peres: a model role for sustainable and efficient agriculture and cattle ranching production
© WWF-Brasil/Bruno Taitson
Paulo Sergio Peres features high productivity in its 1,250 hectares farm, a medium size one in Acre, in the Brazilian Amazon. He fully complies with the requirements of Permanent Preservation Areas and Legal Reserve and complains about the amnesty issued to those who have illegally deforested.

Farmer Paulo Sérgio Peres arrived in the state of Acre (South West Amazon) in 1973.  He came from Paraná state (Southern Brazil), together with his father. Peres settled in Bujari county, some 50 km away from the state capital city, Rio Branco. He devotes his time to cattle raising – both dairy and beef cattle --, rubber production from rubber tree plantations, and fish farming.  He also develops subsistence crops in his property, which is 1.250 hectares, considered medium size.

According to Peres, the line of argumentation of the ruralists (representatives from big farmers and landowners) to justify the change in legislation, saying that the Forest Law is an obstacle to agriculture and cattle raising activities, does not match reality.  “The problem is in no way in the laws.  Brazilian agriculture’s problem is the shortage of highways, licensing delay, and the lack of funding. The producer wants roads and schools to have his family close by”, he explains.

Peres and his brothers implement a model management in their property. The practice they adopted in cattle ranching is a pasture rotation system to avoid soil degradation.  They also invest in the herd’s genetic improvement.  He stresses that “while the average in the Amazon region is less than one head of cattle per hectare, my own is over 2.5.”

His investment in rubber tree plantation is already yielding results and in 2012 he will be able to produce 80 tons of rubber per year.  The Pirarucu (Arapaima gigas) fish tanks show good output as well and in the near future Peres expects the annual sales to go up to 60 tons of fish. “Production diversification is the key” -- that is the lesson he has to offer following almost 40 years of experience in agriculture and ranching activities in Acre.

Conservation of the required percentages of Legal Reserve and of Permanent Preservation Areas within his property is considered by the farmer to be of crucial importance.  “The good producer is aware that it is necessary to keep such reserves”.  The outcome can be seen not only in productivity but also in local biodiversity:  several species of birds, large rodents such as the agoutis (both paca and cotia), deers, monkeys and even jaguars can be found there.

The farm is considered to be a model role of sustainable production in Acre.   The Peres family often hosts university students and researchers, including those from foreign organizations, who go there to watch their management methods to achieve productivity and biodiversity conservation results.

Paulo Sérgio Peres has always complied with the environmental legislation and he harshly criticizes the amnesty for those who have illegally deforested until 2008, as foreseen in the substitute bill for the Forest Law which was approved by the House of Representatives last May.  “I felt that this pardon was unjust to me.  I followed the law while others cleared the forest and made a lot of money out of it, and now they will get by with that.  They told me time and again that I should deforest all of it, but I decided to comply with the law”. 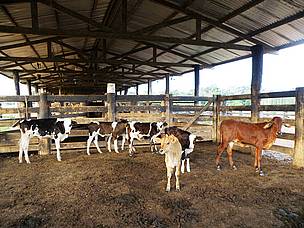 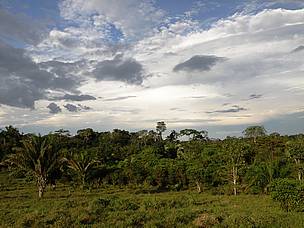