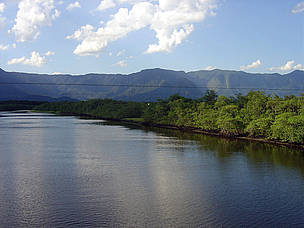 Guaratuba, Bertioga, São Paulo, Brazil.
© WWF-Brasil / Instituto Ekos Brasil / R.A.F. Lima
The Restinga de Bertioga State Park in the state of São Paulo has now been officially created. Today (10th) the Official Gazette of the State of São Paulo published the Decree signed by Governor Alberto Goldman.
The 9.3 thousand hectares park lies in the municipality of Bertioga where it will serve to maintain local biodiversity and environmental services that are highly useful to society as a whole and also establish an ecological corridor linking the coastal regions to the Serra do Mar range. Its classification as a strict protection area means that it will be a space dedicated to ecotourism, leisure and environmental education for the Brazilian people.
The creation of the Park, duly approved by the São Paulo State Environment Council (Consema) towards the end of October, has always been one of WWF-Brazil’s priorities and to that end it unfolded a series of mobilisation activities via the Internet gathering considerable public support for the expansion of areas of Atlantic Forest under protection. The newly protected region encompasses rivers that supply the region and is home to species that are exclusive to that biome, which was formerly seriously threatened by real estate development pressure and unregulated tourism.
“The creation of the Park represents the victory of a process that was backed by large-scale technical studies and it has helped to fill a critical gap in Atlantic Forest conservation as there was no existing sample of the Restinga vegetation in the centre of the state that was adequately protected.  The public hearing processes and the political negotiations were exhaustive and some proposed alternatives involving private conservation were eventually accepted. That is why we applaud the São Paulo State government’s initiative and reiterate our firm intent to continue supporting the state system and contributing to improving its management. It should be stressed that, contrary to their being what some describe as an obstacle to development, areas like the Bertioga Park actually enhance the value of tourism in this magnificent region of the Brazilian coastlands”, insisted WWF-Brazil’s Conservation Director Claudio Maretti.
Luciana Simões, WWF-Brazil’s specialist in Atlantic Forest conservation remarks that what is needed now is to effectively implement São Paulo’s newest park and earmark funds and infrastructure for its proper management and surveillance and that could be achieved by means of a partnership with the municipal authority of Bertioga itself. She also reminds us that a Management Council has to be set up with a balanced representation of government and society and the elaboration of the management plan, which will set out the forms of use that can be made of the protected area needs to be set in motion. “WWF-Brazil will continue to support this process as it has been doing for six years now and always with a will to expand and qualify the conservation of Atlantic Forest vegetation formations”, she said.
Take a look at the Decree that created the Restinga de Bertioga State Park here. In spite of having been approved by the by the State Environment Council Consema/SP, the proposed 58-hectare Itaguaré Area of Relevant Ecological Interest was not included in the text of the decree.
Atlantic Forest – With its forests, grasslands, restingas and mangroves now reduced to a third of their original area, the Atlantic Forest is currently the most degraded of the Brazilian biomes. Less than 8% of its vegetation is well conserved but even so, the remaining stands still provide indispensible ‘environmental services’ like protecting and maintaining rivers and lakes, avoiding the collapse of steep slopes, and regulating the climate and the quality of the air.
A study conducted by the WWF Network and the World Bank has revealed that 105 of the world’s largest cities, including Rio de Janeiro, São Paulo, Brasília, Belo Horizonte, Salvador and Fortaleza, depend on water supplied by Protected Areas and the study also concluded that the Atlantic forest formations distributed along water courses are in jeopardy. Wherever they are preserved, they help to restrain floodwaters, protect biodiversity and form ecological corridors linking up conserved areas.
Currently there are 123 federal, and 225 state-protected areas of Atlantic Forest vegetation totalling almost 75 thousand square kilometres.