Amor-Peixe project consolidated as an example of sustainable handicraft production 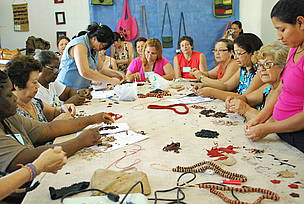 The craftswomen share with other women the knowledge they acquired.
© WWF-Brasil/Terezinha Martins
By Geralda Magela

The Amor-Peixe Association was set up in 2003, in Corumbá, a Brazilian city on the banks of the Paraguay River, which forms the frontier between Brazil and Paraguay. With a lot of hard work and creativity, the women make use of fish skins that were formerly thrown away and turn them into beautiful handicraft objects such as belts, bags, wallets, diaries, clothing, bracelets and costume jewellery. The project not only brings in an income for the women but it enhances their self esteem and is an excellent example of making good use of waste materials.

Since 2003 WWF-Brazil has been supporting the association by providing environmental education and fostering social insertion. In 2007, the NGO ran a series of capacity building workshops designed to enable the group to re-organise its structure.

That work was coordinated by biologist Terezinha Martins of WWF-Brazil’s Pantanal Programme and professor Josenildo Souza e Silva from the Federal University of Rondônia, a fisheries engineer and a specialist in participative methodologies.

The educators and the group established a work plan that included a series of live workshops and activities to be undertaken in the intervals between them. At the workshops they learned about design, associativism, entrepreneurship, environment, participative management and public policies.

The knowledge acquired in the capacity building courses and the other activities has helped these craftswomen to improve their organisation and produce objects that are more attractive to the market while at the same time valuing the Pantanal’s regional culture and the environment. “Nowadays they receive invitations to participate in events like fairs and seminars and their work is widely recognised as an example of sustainable handicrafts”, declares Terezinha.

The recycling work generates income and reinforces these Pantanal women’s identities. In addition to the social and organisational aspect, the projects has strongly emphasised environmental considerations. In the Amor-Peixe, nothing is thrown away. Everything is made use of. Even the fish scales are transformed into costume jewellery.

“I consider this project to be an outstanding example of successful socio-environmental insertion; not just because it is removing solid waste from the environment but because it is altering the production model and promoting the social insertion of these women”, explains professor Josenildo.

Another aspect he feels is very important is the valuing of the regional Pantanal culture. “We have managed to restore in them a feeling of belonging to the Pantanal by incorporating it into the design of the products. Today they realise what that means and imprint the Pantanal brand on their products and imbue them with traces of Guarani culture”, he adds.

At the end of October, the Amor-Peixe Women’s Association in Corumbá (Mato Grosso do Sul) and WWF-Brasil ran a capacity building course on associativism and handicraft production using tanned fish skins for new members of the association. A meeting was also arranged with the new partners that will be supporting the women’s group from now on. The workshop and the alliance of new partners marked the finalisation of the formal support WWF-Brazil has been giving to the project  since 2003.

Now that the group has been consolidated, WWF-Brazil is gradually phasing out its formal support for the association. Support for the holding of the latest course and the formalising of the partner alliance were part of that strategy of gradual withdrawal.

WWF-Brazil’s Pantanal Programme coordinator Michael Becker explains that the idea of finalising formal support is to give the group greater autonomy and open up space for new members that also have a lot to contribute. “The partner alliance ensures that the group will not be left entirely on its own and can continue its further development”, he said.

The partner alliance built by WWF-Brazil and the association is made up of a variety of institutions including the Ministry of Fisheries, SEBRAE, the Federal University of Mato Grosso do Sul (Corumbá campus), Embrapa, the Homem Pantaneiro Institute, Rede Cerrado, the Corumbá Culture Foundation and the Municipal Authority of Corumbá.

Becker considers that WWF-Brazil’s work with the group has now completed all the planned stages and achieved far more than was originally expected. “Today the group is inserted in public policies, has learned to write up its own projects and is an outstanding example of sustainable handicraft production.”  He also points out that WWF-Brazil will continue to accompany the group’s endeavours and wish it every success.

An example for other groups

Today Amor-Peixe has become an example of community organisation and is frequently called on to share its experience with other groups. In the middle of November, the association’s president Joana Ferreira was invited to come to Brasília (Brazil´s capital) to take part in a workshop organised by the Ministry of Agrarian Development where she will make a presentation of the association’s experience to other groups.

The association also participates in the Forum of the Supportive Economy (Economia Solidária) Network, which works with community projects and is also linked to the Ministry of Agrarian Development.  Association member Rita Conceição Alves represents the group in the forum. From November 12 to 14 Rita took part in the 2nd Pantanal Supportive Economy Fair in Aquidauana, 300 km from Corumbá. There is already a schedule of fairs that they were invited to take part.

Joana and her companions are confident about the future, especially when they look back and realise how much they have grown in terms of knowledge acquired in the workshops and put into practice in their group work. “I can see that we have made big leap forward. Before we only knew how to produce; we did not know how calculate the value of our work or how to organise ourselves as a group”, comments Joana. In her view the workshops run by WWF-Brazil were fundamental to bringing that growth about. ”We have learned to organise ourselves, have confidence in our own capabilities and to work and think as a group”, she says, enthusiastically.

At the moment the group consists of 12 members. Joana believes that the big challenge now is to increase production and that makes it necessary to increase the number of participants. That was the purpose of the workshop held in October, which was attended by 30 women. Four of them are already undergoing training at the association with a view to incorporating them into the group. Later others will do the same and also be evaluated for membership.

As a craftswoman she is proud of the group’s achievements. “We are united and strong. Each one knows her own role and importance”, she declares. In her view, that is what ensures that the members can carry out their work independently but in a well organised and collective manner. “Nowadays whenever I have to travel, my mind is at ease because I know that the work is still being done, regardless of whether I am there or not”, she explains.

The Pantanal is the world’s largest wetland system. Its Basin encompasses an area of 624.320 km2 of which 61% is located in Brazil, 20% in Bolivia and 19% in Paraguay. This huge freshwater reservoir is important for the protection of freshwater ecosystems, the climate stabilization, land conservation, and the maintenance of its rich biodiversity.

For this reason, WWF-Brazil elected in 1998 the Pantanal Wetland as one of its main regions to work with projects that links conservation and regional development. To guarantee the sustainability of the projects, the work is done involving local actors, aiming to establish partnerships that stimulate the adoption of good social and environmental practices.

The craftswomen share with other women the knowledge they acquired.
© WWF-Brasil/Terezinha Martins Enlarge
Gostou deste artigo?