The Alcatrazes frog: makes its home in a bromeliad | WWF Brasil

The Alcatrazes frog: makes its home in a bromeliad 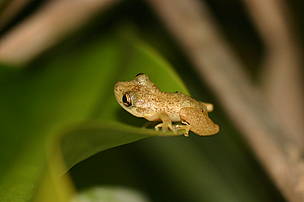 The Alcatrazes frog (Scinaz alcatraz), a native species of the island of Alcatrazes, off the coast of São Paulo.
© Norberto Hulle

The Alcatrazes frog (Scinaz alcatraz) is a native species of the island of Alcatrazes, off the coast of São Paulo. The females are larger and heavier than the males weighing 1.9 grams and are 28 mm long. The males are 23 mm long and weigh just 0.9 grams.

The Alcatrazes frog belongs to a group of species that reproduce exclusively in bromeliads. Apparently it is the female that chooses the male for mating which takes place in the months from October to April. The couple goes down into the central part of the bromeliad where the eggs are deposited and after hatching the tadpoles grow in the water accumulated at the base of the leaves.

This species must keep its skin moist even though it never actually drinks water and that is why it stays down in the moister parts of the plant. Part of its respiration is through the skin so that if it were to dry the frog would die of suffocation.

The harmless little Alcatrazes frog is threatened with extinction. The species lives exclusively on the island of Alcatrazes but no protection policies have been defined for the island as yet. The islets and semi-submerged flat rocks of the Alcatrazes archipelago belong to the Tupinambás Ecological Station which is administered by the Chico Mendes Institute for Biodiversity Conservation but the island needs to be included in an area strict protection if this species is to be effectively protected.

The recuperation of part of the island’s vegetation, recently damaged by fires, and studies designed to find out more about the biology, ecology and genetic variability of the species are important strategies to that end towards preserving the species.

How can the species be saved?

The Alcatrazes frog is just one on a long list of amphibians and other animals threatened with extinction in the areas of Atlantic Forest vegetation. Creating and consolidating protected areas could be a critical factor in determining the preservation of these species.

As part of its campaign “Caring for Nature means caring for life”, WWF-Brazil is presenting a list that includes possible protected areas that could be created in the Amazon, Pantanal, Atlantic Forest and Cerrado biomes and aimed primarily at guaranteeing the protection and sustainable use of a significant portion of Brazilian Nature.

The list is also a suggestion that would enable the Brazilian government to achieve the total area of natural vegetation under official protection that it pledged to as a signatory nation to the United Nations Convention on Biological Diversity (CBD).

The coastal region of the state of São Paulo is one of the richest regions in terms of Atlantic Forest amphibian species and that confers added importance to it as one of the remaining stands of that biome.

WWF-Brazil is giving full support to the creation of a protected area in the municipality of Bertioga. The 8,025 hectare area earmarked for protection connects the coastal region to the Serra do Mar State Park and is the site of a rich variety of environments – dunes, beaches, rivers, forests, mangrove swamps, and varieties of the typical Restinga formation (vegetation associated to sandy coastland soils), where many rare species and others threatened with extinction are to be found.

The Alcatrazes frog (Scinaz alcatraz), a native species of the island of Alcatrazes, off the coast of São Paulo.
© Norberto Hulle Enlarge
Gostou deste artigo?