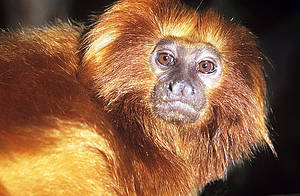 This animal’s lifetime lasts approximately eight years and its habits are in the day time.  At night, it sleeps in the hollow of a tree or amidst entangled lianas and bromeliads.   The Golden lion tamarin feeds on fruits and on invertebrate and small vertebrate animals.  Some studies prove that it eats more than 60 plant species and, after digesting them, it helps disperse the seeds around the environment.

The Golden lion tamarin can reproduce once or twice a year and the reproduction periods are from September to November and from January to March.  Males and females do not differ in color or size.  When there is a litter, both mother and father help raise the offspring.

Almost extinct
The image of this small primate around 60 centimeters high has been around the world and since the 1970’s it is a symbol of the fight for biological diversity conservation.  The reason for that is the fact that the Golden lion tamarin has been a threatened species for a long time. The Atlantic Forest destruction almost exterminated the entire Golden lion tamarin population.

Originally, the species was found all along the Rio de Janeiro state coast and reached up to Espírito Santo state. Due to the intense occupation of the state’s coastal area, as well as to logging, agriculture and cattle ranching activities, followed by the consequent forest destruction, the tamarins are now confined in some 20 forest remnants.

Although a small animal, the Golden lion tamarin needs a lot of space.  The species stays in groups of 8 individuals or so and this number can go up to 14.  Each group occupies an average of 110 hectares.

Researchers state that, in order to have the Golden lion tamarin out of the threatened species list, it is necessary to have 2,000 individuals by 2025 living freely in the wild in an area of 25,000 hectares of forest. Today, wild populations of Golden lion tamarin include less than 1,000 individuals and they are spread out in the forest remnants, most of which are no bigger than 1,000 hectares.

Conservation work
The history of Golden lion tamarin population recovery actions is mingled with WWF-Brazil’s history.  In 1971, when WWF international network began its operation in Brazil, its first institutional project chose to support studies about a still unknown primate in Rio which was threatened with extinction.

This was a pioneer work and it became the Golden lion tamarin Conservation Program, which is one of the most successful ones in the world.  The work is being carried out for 30 years by several partner organizations.

Different strategies were adopted to increase the Golden lion tamarin population. During the 80’s, a group of marmosets born in captivity began being reinserted in the natural environment.  The results were very good.  By year 2,000, around 150 animals had been released in the woods.

Besides reproduction in captivity, researches invested in the translocation of Golden lion tamarins -- i.e. they removed the animals from forest fragments which were too small and took them to bigger ones.  Both these management techniques are very important to enlarge the species distribution area and to increase its genetic variability, thus reducing its vulnerability to illnesses and decreasing destruction of some specific fragments.

The relevance of protected areas
Protected areas, known by the Portuguese acronym UCs, play a crucial role to keep the Golden lion tamarin from the risk of extinction.  Just to have an idea, the largest populations of this species are found in protected areas.  The two larger ones are in Poço das Antas Biological Reserve and in the União Biological Reserve, both of them located in Rio de Janeiro state.
This International Year of Biodiversity, it is imperative that Brazil focuses its attention on the Atlantic Forest protection.  This forest shelters not only the Golden lion tamarin, but also several other endemic species.

Brazil’s commitment to the United Nations Biological Diversity Convention is to protect 10% of the original Atlantic Forest area and ensure that they are within protected areas.  Nevertheless, the remnants of this biome are so few and so little that our challenge today is to ensure complete protection to all of the remaining forest fragments.