The Giant Anteater: a voracious devourer of ants 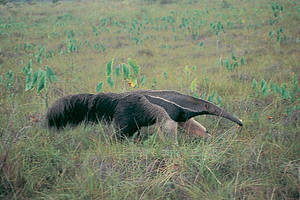 The Giant anteater is easily recognisable by its characteristic coat.
© Roger Leguen / WWF
In order to eat up to 30 thousand ants and termites a day and survive, this mammal needs a variety of habitats. Find out more about this species that could once be found in all the Brazilian states but is currently under threat of extinction.

The Giant anteater is about 2.2 metres long and weighs up to 45 kg. It has a large tail covered with extremely coarse, long hairs, and has a highly elongated snout. The Giant Anteater (Myrmecophaga tridactyla) uses its huge front claws to dig up anthills and termites nests and capture up to 30 thousand ants and termites a day with its long extendible tongue.

The species is easily recognisable by its characteristic coat  with a broad diagonal black stripe flanked by white borders that runs from its chest over its shoulder to the middle of its back. Its front paws have three huge curved claws on them and are lighter coloured than the back ones which have five short claws.

Because it only feeds on ants and termites it has no teeth. It has a keen sense of smell and that is its main instrument for locating its prey. A greedy eater, as soon as it finds an anthill it quickly rakes out what it can get and hurriedly moves on to the next source of food.

The giant anteater is adapted to living in a variety of habitats. Although it spends most of the time on the ground it is quite capable of climbing trees. It can hunt for its food in the day or at night depending on whether it is very hot or if it is raining.

It can be found in open grassland, cerrado (scrub) savannahs and uses woods and forested areas to rest and shelter during the hottest time of day coming out into the open savannah areas when the temperature is not so high.

Because of its versatility, the giant anteater can be found in most of Central and South America. It was originally present in all 27 Brazilian states but presently it us under the threat of extinction in all regions of Brazil and has already disappeared from the states of Rio de Janeiro and Espirito Santo in the south-eastern part of the country

The main causes of its population losses are the degradation and destruction of its habitats but hunting and accidents on highways as well as forest fires take their toll and play their part in putting the giant anteater on the endangered species list.

The main strategies for the conservation of the giant anteater involve studies to determine its population status, the creation and proper maintenance of conservation units, the implantation of ecological corridors, environmental education and the promotion of alternative forms of sustainable development.

Due to its environmental characteristics, the Pantanal, the largest wetland areas on Earth and one of WWF Networks priority ecoregions for conservation, is the habitat of a huge variety of animal species. 263 fish species, 122 mammalian species, 93 species of reptiles, 656 species of birds and 1,032 butterfly species have been registered for the region.

In the Pantanal it is still relatively easy to spot a giant anteater because of the open grassland areas; the conservation of this ecosystem is essential to the survival of the species.

Find out more about what WWF-Brasil is doing to preserve the habitats of the giant anteater in the Pantanal, in the Amazon and in the Atlantic Forest areas.

Is it a tail or a blanket?
Because of the poor nutritional quality of its diet the giant anteater has a slow metabolic rate and consequently, has some difficulty in maintaining its body temperature. To overcome that difficulty the species has evolved the habit of hiding from heat or cold inside the forest.

But that is not its only strategy. In spite of inhabiting the tropics the giant anteater has a very thick coarse coat, especially its tail. When it wants to sleep it first makes a shallow cavity in the ground then lies on its side and sets its tail to cover the entire body. The long coarse fur of the tail functions as an insulator and it also helps to camouflage the animal while it sleeps.

After a pregnancy of 190 days the females give birth to tiny fragile young and they also use their tails to hide and protect them when they are suckling. A young giant anteater rides on its mother’s back for the first nine months of its life.