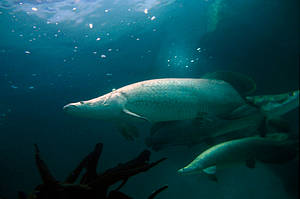 Arapaima is a large fish and may be up to 3 metres long and weigh between 100 and 200 kg.
© WWF / Michel Roggo
The Arapaima (Arapaima gigas) is the largest freshwater fish in the world. A native of the Amazon, it brings benefits both to the ecosystem it inhabits and the local fishing communities. Its Brazilian name Piraracu is derived from two indigenous words – pira meaning fish and urucum the name of the annato (a red pigment) plant in reference to the reddish marks towards the tail-end.

It is a large fish and may be up to 3 metres long and weigh between 100 and 200 kg. It has two breathing mechanisms, gills for breathing in the water and a modified respiratory swim bladder that works as a kind of lung and enables it to breathe in air.

The species inhabits lakes and tributary rivers with clear waters and temperatures between 24 and 37ºC, The Arapaima is not found in waters with a strong current or those heavily laden with sediments.

The Arapaima is omnivorous and can feed on plants or animals. Its varied diet may include fruits, worms, insects, molluscs, crustaceans, fish, amphibians, reptiles and sometimes even aquatic birds.

During the low-water season the fish pair off for mating and the red colour on the flanks of the males becomes more intense. Before the female deposits the eggs on the river bed, the male cleans the area and pulls out any weeds or obstacles in the selected spot with its jaws. It then makes a round hollow in which the female lays the eggs and the male partner then releases his sperm to fertilize them. During the period of incubation the female stays nearby while the male circles a little further off  to scare away any predators that might threaten the eggs. The eggs hatch in 8 to 10 days.

Once caught, the Arapaima’s flesh is opened up in thick sheets, salted and sun-dried and delivered to the market. It is known as the codfish of the Amazon partly because of the good quality and flavour of its flesh and partly because the flesh practically no bones in it.

The increase in commercial fishing over recent decades has put tremendous pressure on fish stocks and had severe impacts on the main commercial species like the Arapaima.

The risk of extinction for this species stems from predatory fishing practices that have been going on for years now. The fish’s natural rhythm of reproduction is insufficient to replace the number of Arapaimas being caught each year. Such unsustainable exploitation of the species led the Brazilian Institute for the Environment and Renewable Natural Resources – IBAMA to establish regulations in 2004 governing the fishing and capture of the Arapaima in the Amazon region, prohibiting its capture during certain months of the year and specifying a minimum size for individuals that can be captured and commercialised.

Sustainable Management
One of the efforts made to avoid the disappearance of the species was the implantation of projects promoting the sustainable management of Arapaima stocks.  A good example of an initiative designed to ensure the sustainability of fishing activities is a project being coordinated by the Government of the State of Acre and WWF-Brasil with the support of Ibama  and a local fishing community in the municipality of Manoel Urbano where the species was under threat of extinction from excessive over-fishing.

The project consists of training fishermen to manage the Arapaima stocks in an environmentally adequate way to ensure the survival of the species and the economic viability of their fishing activities.

Every year the local community organises the Managed Arapaima Fair. At the event the fishing families sell foodstuffs, and handicrafts made using materials like the scales  from the Arapaima fish, attracting tourists to Manoel Albino and generating extra income.

Interesting facts
•    Arapaima is a traditional food among the riverside communities and its high commercial value is due to its great size and excellent flavour so that it often serves as a substitute for the (imported) salted codfish.
•    Arapaima flesh is practically free of bones and many delicious regional dishes are based on it the best known one being "pirarucu de casaca".
•    The scales are used as nail files or to make a variety of ornaments and the bony tongue is widely used for grating cylinders of solid Guaraná.The the roe is also eaten and studies are in progress on the possible use of the skin to produce shoes, bags and garments.
Adult Arapaimas are from 2 to 3 metres long and weigh from 100 to 200 kg.

Arapaima is a large fish and may be up to 3 metres long and weigh between 100 and 200 kg.
© WWF / Michel Roggo Enlarge
Gostou deste artigo?