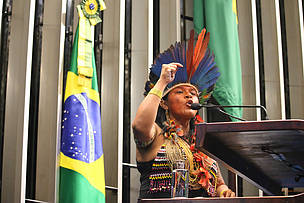 Sônia Guajajara’s voice is soft, but bears the strength of a warrior. Her words are well pronounced and denote a wit which is as sharp as an arrow. Born in 1974 in a village in the Amazon forest in the State of Maranhão, today she is currently one of Brazil’s most important indigenous leaders.

She coordinates the National Articulation of the Indigenous People of Brazil (APIB), which organised a national mobilisation that culminated in a gathering of around 1,500 indigenous leaders representing various ethnic groups in Brazil’s capital Brasilia. They came to protest against what they call “a systematic attack against indigenous peoples’ rights”.

During the protests, Sônia Guajajara was heard by Brazil’s Vice President, spoke directly with the president of the Chamber of Deputies, gave a speech in the Senate and protested in front of the Supreme Federal Court, symbolically going face-to-face with her enemies.

In her opinion, the biggest threat to the rights of indigenous peoples and their lands are the three powers that compose the Brazilian government. Twenty homologations of indigenous lands awaiting presidential decree are on hold, despite there being no legal or technical grounds to justify the delay in signing by president Dilma. The current government has demarked less Indigenous lands than any other government in the past.

Around 100 initiatives affronting indigenous rights stemming from parliament members are currently being discussed in the National Congress. The most emblematic are the legal framework for biodiversity, the new Mining Code – which could transform part of indigenous lands covered by forest into open-pit mines for mineral extraction – and the Proposed Constitutional Amendment (PEC) 215/2000, which transfers the prerogative to demarcate indigenous and Quilombola lands and create protected areas from the executive branch to the National Congress.

“It is a grave and lethal proposal. For the last five centuries indigenous peoples have guaranteed the maintenance of forest cover and clean water and the continuation of the life in the areas they want to destroy”, Guajajara affirms.
Biased decisions made in the Supreme Court to nullify declaratory orders and decrees homologating lands make it possible to consider 5 October 1988 as the mark of traditional occupation. If this interpretation is confirmed it will restrict the territorial rights of many other peoples, increasing the number of decisions against demarcation procedures and worsening the climate of conflict and violence against indigenous peoples.

For Guajajara, the Brazilian government does not know how to dialogue with diversity and is constantly undermining the sacred rights of the Federal Constitution. “It’s an attack, and we are going to defend ourselves”, she says firmly.

WWF: you have said that the Brazilian government is not prepared to dialogue with the diversity that the indigenous peoples of Brazil represent. What does that mean in practice?
Sônia Guajajara: the government, Congress and Supreme Federal Court insist on seeing us as Indians, when we are indigenous peoples. There is a diversity that must be respected, which has value; they are trampling on our traditions, our rites, our culture, which is diverse. They are affronting rights.

WWF: and how does this manifest itself in practice?
Sônia Guajajara: take the case of the biodiversity law. The whole proposal is bad for indigenous peoples. We are disgruntled because the government negotiated our traditional knowledge with business. This knowledge is ours. This bill was made by the federal government to meet the interests of the pharmaceutical and cosmetic industries. They never called on us to give our opinion. And they even took the expression “indigenous peoples” out of the text and replaced it with “indigenous populations”, which goes against the Constitution. The government has also stopped demarcating our lands. There are 20 processes ready to be signed by the president. The government has decided to put them all on hold.

WWF: what other serious threats to indigenous peoples are there?
Sônia Guajajara: the most emblematic is the PEC 215, because it has had the most visibility. The Proposed Constitutional Amendment violates the Constitution. It takes away the power of agencies such as ICMbio (The Chico Mendes Institute of Biodiversity Conservation) and Funai (the National Indian Foundation) to create Indigenous lands [as well as Quilombola lands and protected areas], and hands it to the deputies. And, knowing that the legislative branch is against indigenous interests, lands stand not to be demarcated if it is approved.

WWF: are your territories at risk despite harbouring some of the most well conserved areas of forest in the country?
Sônia Guajajara: yes. And there is still the mining legal framework, which seeks to open our lands up to exploitation from mining companies placing the integrity of our lands at risk. We shouldn’t have to “negotiate” the exclusive usufruct of lands, a right guaranteed to indigenous peoples by the Constitution.

WWF: is the Supreme Federal Court also against indigenous peoples?
Sônia Guajajara: The Supreme Federal Court (SFC) has always been our ally, but that’s changing. It has suspended declaratory orders and the demarcation of Indigenous lands. The SFC should be helping, but it is backtracking, denying territorial rights and going against the Brazilian Constitution.

WWF: do you feel closed off by the government?
Sônia Guajajara: this is the most critical moment in our history, because the powers [executive, legislative and judicial branches of government] are working together. It’s a systematic attack against our rights.

WWF: and how are you going to react?
Sônia Guajajara: we will continue with political mobilisation, organisation and resistance. That’s our way of assuring our rights. 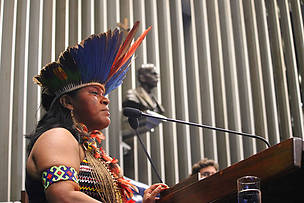