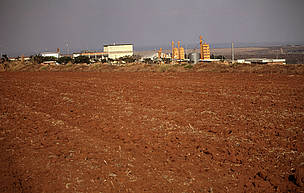 The states that destroyed the largest areas were Maranhão, Piaui, Tocantins, Mato Grosso and Bahia. Official figures reveal that the deforestation process is advancing into the northernmost areas of Cerrado where the largest remaining stands are to be found, but even in regions of Mato Grosso, Goias and São Paulo where the natural formation is practically extinct, there was evidence of further deforestation.

The Ministry of the Environment attributes the expansion of Cerrado loss to the uncontrolled advance of agriculture and livestock production, illegal charcoal production and the expansion of urban occupation. In Maranhão, livestock production has led to the destruction of areas that were in process of regeneration and the destruction of areas of natural stands of Babassu Palms, which are an important source of food and livelihoods for large numbers of extractive families.

With the registration of the annual rate of Cerrado loss announced today the government claims it is fulfilling its commitments on deforestation reduction. The target for the Cerrado formation was to reduce annual rate of loss by 40% by the year 2020 as compared to the average rates of loss registered from 1995 to 2008.

“The goal is being achieved and it can now be reviewed (with view to setting a target of even greater reduction). Our current efforts are directed at having an annual monitoring system in place for the Cerrado similar to the one we have for the Amazon”, explained Bráulio Dias, head of the Biodiversity and Forests Department at the Brazilian Ministry of the Environment.

Without making claims as to the reasons for the tendency to reduction in the rates of Cerrado vegetation loss, the government mentioned that from January to August this year 517 notices of infraction were served in 140 municipalities with the respective fines amounting to 143 million Brazilian reals, all for illegal deforestation activities.

“Our surveillance and inspection is focused on those municipalities that carry out most deforestation. We also have to act in collaboration with the state authorities to determine how much of the deforestation was legally permitted and how much was illegal because ever since 2006 the states have had the power of authorising deforestation”, reveals Izabella Teixeira, the Brazilian Minister of the Environment.

The figures released today by Ministry of the Environment do not embrace all the areas that have been cleared and burned outside of the National parks and other protected areas  up until the end of 2010. The complete balance sheet will only be available when the figures for the period August 2010 to July 2011 are finalised.

“The losses caused by burning of the savannahs have still not been fully calculated . Whatever has been burned and eventually fails to b regenerate will only show up in the next period”, remarked Mauro Pires, Head of the Ministry’s Department for Policies to Combat Deforestation.

Last year was marked by a long season of intense burning that consumed 1.7 million hectares of vegetation in federal protected areas alone. Up until September of this year, 323 thousand hectares have been consumed in those same spaces. Many protected areas, especially in the Amazon and the Cerrado are still burning. The origin of many of the fires is in deliberate criminal acts. This year the Brazilian Air Force is helping to combat them.

On Tuesday (13/09)  as part of a series  of demonstrations against the reforms to the Brazilian Forest Law being  proposed by agribusiness and large landholding interests and currently before the Federal Congress, a group made up mainly of students dressed up as forest firefighters demonstrated at the Senate where a public hearing is underway in which four senate standing committees will be hearing the opinions of renowned jurists on the polemical draft legislation.

“The draft bill as it stands represents an absurd step backwards for Brazil, The Congress is ignoring the scientific Community  and the opinion of the majority of the Brazilian people  who are not in the mood to accept any further deforestation. We already have sufficient cleared areas that are not being fully used  that we can exploit to increase rural production without the need to throw down a single tree. What we need to do is to think long-term,  to think in terms of  water resources and biodiversity and the future”, insisted Paulo Fiúza, of the Living Cerrado Movement (Movimento Cerrado Vivo). 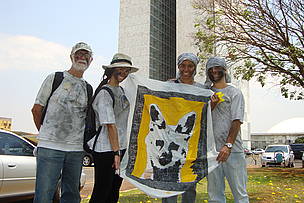 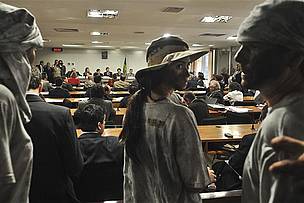