Cerrado loses one city of London every three months 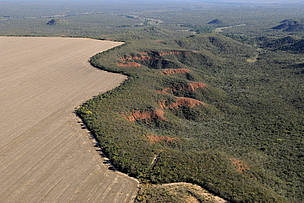 The loss of vegetation cover in Cerrado biome from August 2018 and July 2019 was 648,400 hectares
© Adriano Gambarini / WWF-Brasil
Data released today (dec 16th) show that deforestation is heading towards a mass extinction process

The Brazilian government reported today that the loss of vegetation cover in Cerrado biome from August 2018 and July 2019 was 648,400 hectares, maintaining the worrying levels of recent years. Although there was a small reduction from 2.26% over last year, the loss is still alarming: it amounts to the overthrow of the city of Sao Paulo, or the metropolitan area of London, every three months. Recently, the Brazilian National Institute for Space Research (INPE) has also announced an increase of almost 30% in deforestation in the Amazon last year and 114% since the year of the new Forest Code (2012).

The new released data are from Prodes Cerrado, mapped by INPE and coordinated by the Brazilian Ministry of Science, Technology, Innovations and Communications (MCTIC). Its historical series indicates stabilisation in the Cerrado destruction rate in the last four years at an average of 680 thousand ha/year. This means that more than half of the original area of the biome has already been converted, mainly to agricultural activities. Researches also show that unfortunately, only 20% of what remains of vegetation is in healthy conservation conditions. This makes the Cerrado one of the most endangered natural areas on the planet. According to researchers, at the rate of destruction of recent years, the Cerrado is moving towards a process of unprecedented mass extinction in the history of the planet.

Regarding the numbers of deforestation in the Cerrado, Mauricio Voivodic, CEO of WWF-Brazil, states: “The Cerrado lives a silent tragedy as it continues to be destroyed for lack of responsible policies. The Forest Code, for example, even if it was being implemented (which is not the case), barely protects the biome - between 20 and 35%. Today we have 23 million hectares of already open areas with a high agricultural aptitude for soybeans - a crop that represents more than 80% of agriculture in the biome - and another 15 million hectares already deforested and with potential for agriculture. It totalises 38 million hectares of lands already open. This whole area has the potential to shelter the expansion projected by agribusiness in the region over many decades. Agriculture currently occupies 22 million hectares in the Cerrado, 18 of them with soy”.

Voivodic adds that “the Brazilian federal government gives ambiguous signals to producers: while on the one hand it offers subsidised credit for pasture recovery and agricultural intensification. On the other, it edits a Provisional Measure legalising invasions of public lands that occurred until last year (2018), encouraging the agricultural frontier to continue expanding indefinitely and illegally over native vegetation (on untitled land). We urgently need to end this ambiguity and to give a clear signal that we will not destroy the source of wealth of society and traditional peoples and communities; that we will not jeopardise their unique biodiversity and that we will not compromise the cradle of waters - which supply taps, irrigate crops and move hydroelectric turbines, generating benefit of our economy and for millions of Brazilians, from the city to the countryside.”

The Cerrado and Amazon PRODES figures are different because of the distinction in profile between the actors promoting the devastation. In the Amazon, there is public land without the proper protection of the State and thus available to the invasion of gangs of land grabbers. Deforestation in recent years in the Cerrado has been promoted mainly by private actors, farmers and business groups - especially the so-called land companies. The stabilisation of deforestation rates is partly associated with the fact that such companies have begun to respond to their investors and buyers' call for the elimination of illegalities and deforestation, as zero-deforestation is a rapidly consolidating agenda in both the international and national market, as in economic blocks legislation.

The collective of 150 commodity-buying companies and significant equity investor groups (which include a total of more than $ 7 trillion in their portfolios), called SOS Cerrado, has already indicated that it intends to take immediate action to decouple its supply chains and investments from the destruction of Cerrado. The first signs are beginning to emerge this month: Nutreco, the world's largest animal feed company, Britain's giant supermarket chain Tesco and animal protein company Grieg Seafood (one of the global leaders in salmon production) announced millionaire support to Cerrado soy producers which intend to expand their production without deforestation.

“Considering the social and environmental risks and loss of markets, as well as the huge open area available for productive expansion, the Brazilian government must set goals and concrete actions to reduce Cerrado deforestation and recover about 20 million hectares of environmental liabilities on existing private properties in Brazil,” says Edegar de Oliveira Rosa, director of Conservation and Restoration at WWF-Brazil.

“The government must also offer product traceability and combat illegalities by providing clarity to companies, investors and society about the origin and legality of production. The private sector must also do its part, making business conditional on real security of crime and deforestation in its chains and investments. Government compliance and transparency, as well as the private sector's rigour in its business, will be decisive in curbing destruction,” summarises Rosa.

Brazil seems to be going against global trends by not fighting deforestation and illegality, exposing exports and the economy to growing risks of a boycott. “We need to put ourselves in the other's position and reflect: Which buyer, investor or partner country would like to see their image associated with nature destruction and contraventions?”, Voivodic asks.

The Cerrado extends through the states of Bahia, Goiás, Maranhão, Minas Gerais, Mato Grosso, Mato Grosso do Sul, Piaui, Parana, Rondonia, Sao Paulo, Tocantins and the Federal District. After the Amazon, it is the largest biome in South America, corresponding to 1/4 of the national territory, with over 2 million km2. Demarcated protected areas are insufficient: 3.1% in fully protected conservation units, 5.2% in sustainable use units (most without proper supervision and implementation of management plans) and 4.8% in 109 lands indigenous peoples.

The Cerrado's protected area is numerous times smaller than that of the Amazon, and the vegetation cover of the entire biome has already been reduced to about 20% of the original, with more than half of its territory devastated. Following this trajectory, the destruction of the Cerrado will lead to massive extinction of species, according to an article in the journal Nature (2017). The biome has about 10,000 plant species, of which 44% are endemic, as well as a huge diversity of fauna, including species such as the maned wolf, the giant anteater and the jaguar. The Cerrado is home to 30% of Brazilian biodiversity and 5% of the planet's species. Despite this, destruction follows, and in addition to losing species, annual greenhouse gas emissions from burning and deforestation amount to over 40 million cars.

The current level of destruction compromises the waters that are born in the Cerrado and feed six of the eight major Brazilian watersheds: Amazon, Araguaia / Tocantins, North / Northeast Atlantic, San Francisco, East Atlantic and Paraná / Paraguay, including waters flowing into the Pantanal. The Cerrado is also the source of 90% of the waters of the São Francisco River. When the Cerrado is cleared, it is committed to recharging three large Brazilian aquifers (Bambuí, Urucuia and Guarani), as well as the water resources that are fundamental for millions of people living in the biome and for nine out of ten Brazilians who consume energy coming from hydroelectric. 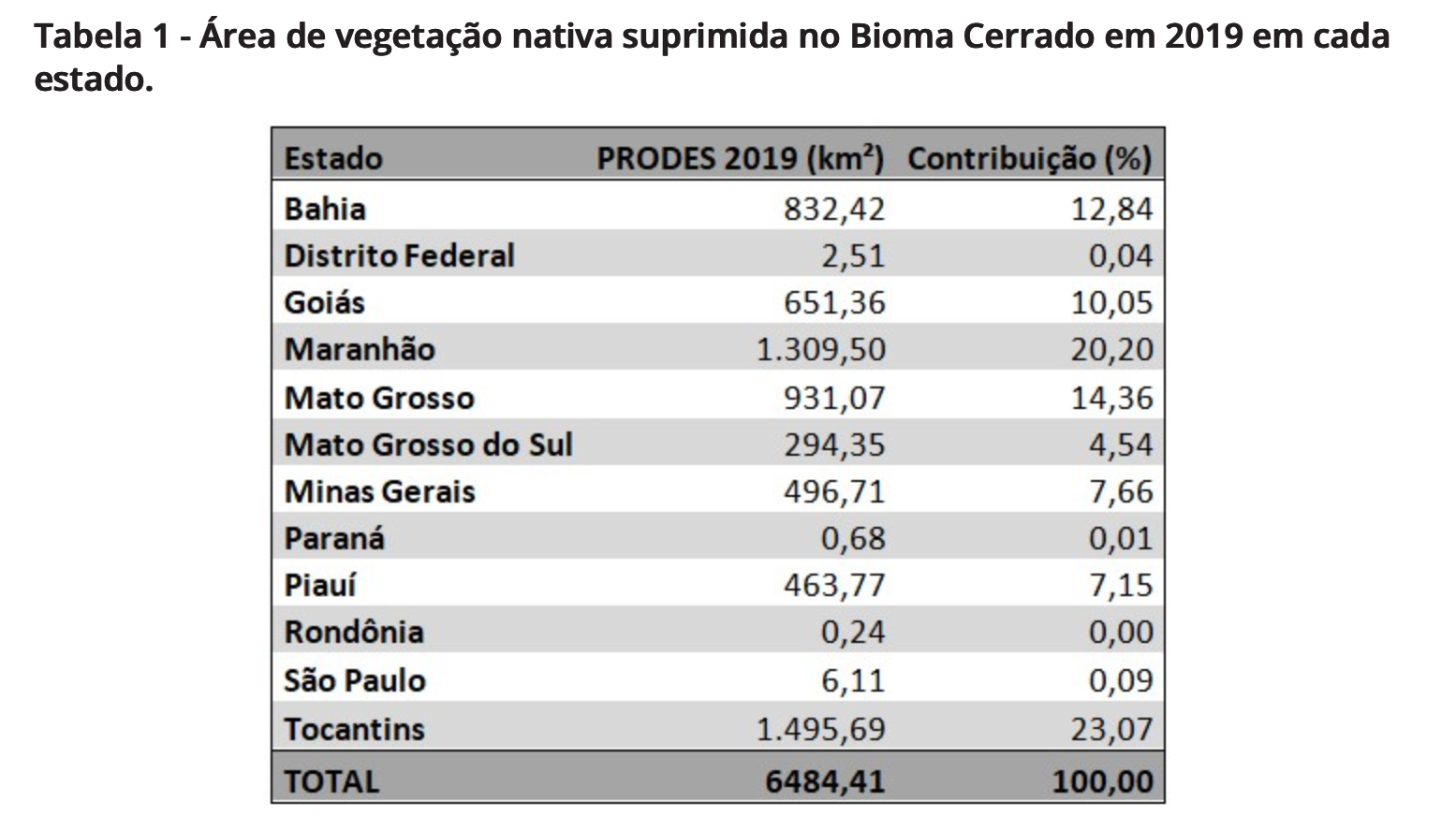 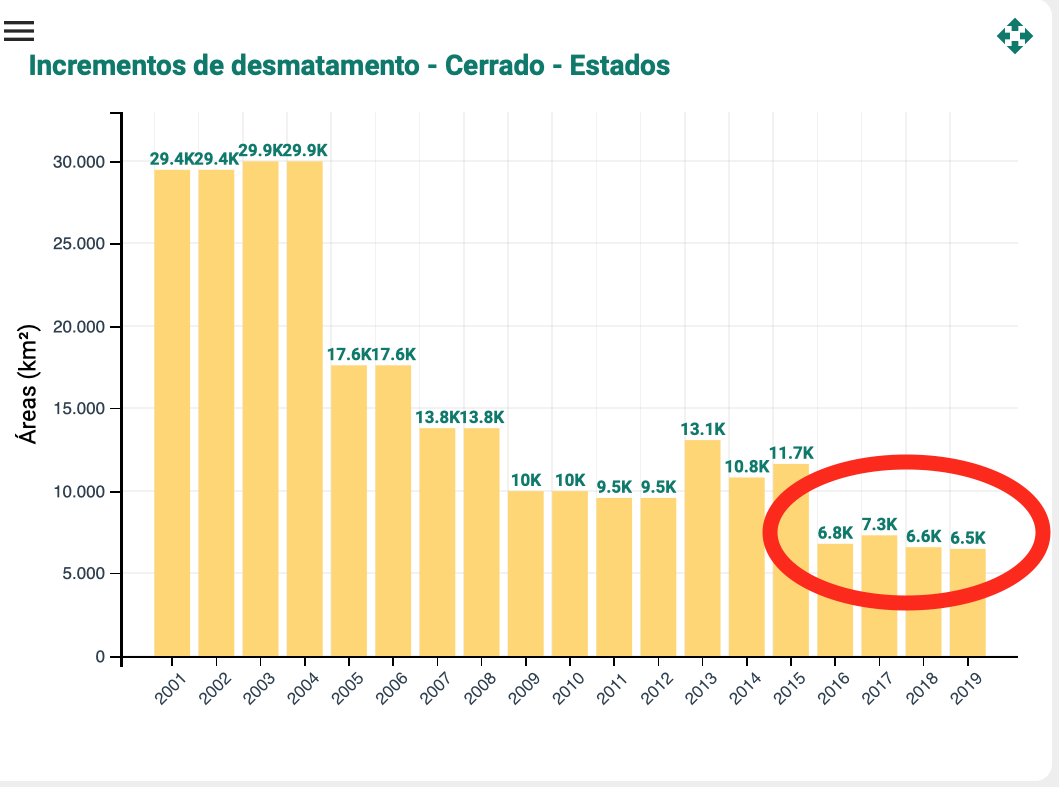