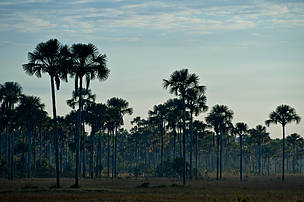 According to the National System of Protected Areas (SNUC in portuguese), a mosaic is constituted when protected areas are located close to one another, are juxtaposed or overlap, belong to different spheres of government or are privately managed. The legislation also includes integrated and participative management involving the managers of protected areas and local populations in order to create compatibility between biodiversity, social diversity and sustainable development. Brazil has 23 mosaics in total, 15 of which federal and eight belonging to state government.

The Sertão Veredas Peruaçu Mosaic was recognised in 2009, and was one of the first to be established in the Cerrado biome, representing a key area in guaranteeing the conservation of the Cerrado. It covers an area of over 1,800 hectares, including different categories of protected areas, from the fully protected to those for sustainable use. It also includes four quilombola communities and two areas of Xacriabás indigenous land, spanning 11 municipalities in the north and northwest of Minas Gerais and one municipality in the southwest of Bahia, a region that brings together unique and impressive landscapes.

“The expansion of the MSVP in this region, which is home to one of the largest remnants of the Cerrado, is a decision that will increase the ecological corridor and benefit the existing fauna and flora, and which will make up for bottlenecks that often limit the performance of conservation actions, such as a lack of human resources and infrastructure. As part of the mosaic, we can optimise these points and promote the exchange of experience, improving quality in the management of protected areas,” declares Sandro Borges, manager of the Oeste Baiano Federal Wildlife Refuge, one of the units in the process of being included in the mosaic.

As well as its wealth of biodiversity, this territory represents a rich source of water. It is here that the Urucuia aquifer is located, which is one of the largest underground water reservoirs in the country, and the Carinhanha River, an important tributary of the São Francisco River that contributes 20% of its flow. Despite this, a study conducted by WWF-Brazil registered that 37% of the Mosaic region has already been altered to plant monocultures, which generates impacts in protected areas, water resources and local communities. Unfortunately this is a common occurrence in the Cerrado, as this is the biome currently suffering the highest rates of deforestation in Brazil.

Kolbe Soares, conservation analyst for the WWF-Brazil Cerrado Pantanal program, considers that the expansion of the mosaic will strengthen actions to integrate protected areas and local communities, as well as planning and executing joint strategies against the momentum towards deforestation that is plaguing the region.”

“With the entrance of these protected areas, the Sertão Veredas Peruaçu Mosaic will become the largest in terms of area and number of conservation units in the Cerrado. It will expand from 1.8 million to cover over 3 million hectares, representing a big step towards the integration of actions for the sustainability and conservation of natural resources,” adds Kolbe.

The list of protected areas that intend to join the Mosaic:
* WWF-Brazil has been active in the region for over eight years through its Sertões Project and since 2017 through its Critical Ecosystem Partnership Fund (CEPF)

With the entrance of these protected areas, the Sertão Veredas Peruaçu Mosaic will expand from 1.8 million to cover over 3 million hectares of Cerrado
© Bento Viana/WWF-Brasil Enlarge
Gostou deste artigo?