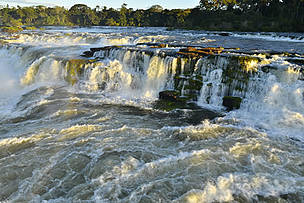 Salto Augusto Falls is one of the Amazon wonders that may disappear
© WWF-Brasil / Adriano Gambarini
Brasília (DF) – Behind closed doors, representatives of Ministries and other agencies of the Federal Government gathered on June 24th, at the Presidential Office (“Palácio do Planalto”), in Brasília, to attend the meeting of the National Council for Energy Policy (CNPE). Created in 1997, CNPE is chaired by the Ministry of Mines and Energy and it advises the Presidency of the Republic in the formulation of energy policies and guidelines for the entire country.

Despite anticipating the participation of civil and academic society, the meeting did not include the participation of NGOs and other movements. "We reiterate the lack of transparency regarding CNPE’s meetings. Important decisions have been taken without a broad and democratic debate with society. Sustainability requires transparency and broad social participation, to ensure balance between economic, social and environmental factors in the formulation of public policies, decision-making and actions that affect the whole or part of the territory and the Brazilian citizens," explains Mauro Armelin, Conservation Director, from WWF-Brazil.

For WWF-Brazil the construction of two dams within the Juruena National Park, located on the border between Mato Grosso and Amazonas states, still represents actual and probable threats and may be included in the agenda for the validation of CNPE at any time. The Council may also declare part of the park as a "public utility," which would be the first step to allow a reduction of the protected area.

So far the SOS Juruena campaign, launched by the organization in order to draw society's attention to the subject, has managed to collect over five thousand signatures from Brazil and around the world, and will continue until the end of July. "Our pressure on the government will continue. We have the support of more people to make sure that Juruena remains intact," he says.

Full protection of Juruena Park is critical to ensure conservation of ecosystems and key species in the Amazon region and assuage the expansion of land grabbing and environmental degradation coming from Mato Grosso state towards the south of the Amazon.

Juruena National Park, created in June 2006, is located north of Mato Grosso state and south of the Amazon. It is the fourth largest national park in the country, with nearly 2 million hectares, equivalent to the size of Israel. Furthermore, the protected area is part of the largest river system in the country (Tapajós Basin). It has the greatest diversity and productivity of freshwater on the planet and occupies a strategic position in the so-called “Arc of Deforestation,” that ensures environmental connectivity of neighboring protected areas as well as between the Amazon and the Cerrado.