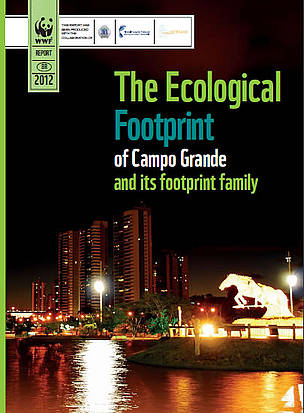 Campo Grande’s Ecological Footprint
© WWF-Brasil
The publication presents the Ecological Footprint study conducted for the city of Campo Grande in the State of Mato Grosso do Sul, the first Brazilian city to make the calculation. The work was carried out by WWF-Brasil in partnership with the Municipal Authority of Mato Grosso do Sul’s state capital, the Global Footprint Network and the Anhanguera private university.

“The purpose of it was to obtain a management tool that could contribute to planning processes in public administration, mobilise the public to re-examine its consumption habits and start to prefer more sustainable products, and also to stimulate companies to improve their production chains”, says Michael Becker, coordinator of WWF Brazil´s Cerrado Pantanal Programme.

The Ecological Footprint of a country, state, city or even of a person corresponds to the amount of productive land and sea needed to produce and sustain a given style of living. It is a way of translating into hectares the territorial expanse that a person or a population or a city, state or country ‘uses’, on average, to sustain the way their ways of eating, dwelling, and moving around, among others. Today most countries already have the calculation of their ecological footprints available but it can also be done on an individual basis. Currently the methodology is being applied in various cities around the world but is only now beginning to be developed in Brazilian cities.

The ecological footprint is an environmental accounting method that evaluates consumption on the one hand and the capacity of the natural resources available on the planet on the other. The studies conducted by the Global Footprint Network, currently responsible for ecological footprint calculations, reveal that humanity has already far exceeded that capacity.

The study involved evaluating the consumer habits of the Campo Grande population and it revealed an ecological footprint of 3.14 global hectares per person, which would be the equivalent of 1.7 planets. That is if everyone in the world consumed in the same way as Campo Grande residents then almost two planets would be needed to sustain that style of life.

About the Ecological footprint

The Ecological footprint is an environmental accounting method that assesses the pressures human populations exert on natural resources. Expressed in global hectares (gha) it makes it possible to compare different consumption patterns and determine whether they are within the planet’s ecological capacity to sustain them.

A global hectare is one hectare with the global average productivity of productive lands and seas in a given year. Bio-capacity is the ecosystems’ capacity to produce useful renewable natural resources and to absorb the residues and waste generated by human beings.