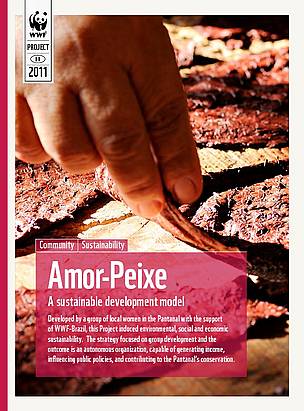 Cover of the publication Amor-peixe: sustainable development model
© WWF-Brasil
This publication tells the story of the Amor-Peixe Project, developed by a group of Pantanal women in Corumba (Mato Grosso) with the support of WWF-Brazil. The Group, created in 2001, learned to make use of a product that formerly had no use whatever – fish skins – to produce handicraft objects. The project is an example of recycling and making good use of residues that were formerly discarded and turning them into art, beauty and income.

Thanks these women’s skills and determination the tanned fish skin becomes the raw material for the production of attractive pieces of handicraft such as bags, wallets, earrings, bracelets, agenda covers, belts, sandals and everything that the artisans’ imaginations allow them to create.

Since 2003, WWF-Brazil has been supporting their association and unfolding a series of environmental education and social insertion activities. In 2007 a re-organisation process was begun in the form of a series of capacity building workshops supported by an organisational consultancy.

During the workshops the artisans learned more about design, associativism, entrepreneurism, environment, participative management, and public policies. The learning process helped the group to improve its production processes  and collective organisation.

Over the eight year period the group ran into difficulties, almost dissolved entirely at one stage, but eventually learned  from facing the difficulties to re-invent itself in an ongoing process of self-awareness and self-surpassing. From the initial range of just 3 products, an agenda, a coin carrier and a pencil carrier, the Amor-Peixe has expanded to a range of 40 different products based on fish leather and offered in the form of a formal catalogue.

Nowadays the Amor-Peixe is an outstanding example of community organisation and is frequently called upon to pass its know-how and experience to other groups. The Association is also part of the Solidarity Economy Network Forum, which has links with the Ministry of Agrarian Development –MDA and is active in fostering community projects.

Once the project had been consolidated WWF-Brazil decided that all its objectives in the project had been achieved and it was time to finalise its support for the Association.  Thus it began to prepare an exit process that would ensure the project’s sustainability. As part of that strategy it helped to organise a workshop designed to qualify new association members  and to construct an alliance of partners for Amor- Peixe that would, from then on, work alongside the group.

The aim of this publication is to register that successful experience and provide input and support  for other WWF-Brazil and WWF-Network projects, and even for other organisations, including future Amor-Peixe partners. The publication is attached in PDF format in Portuguese and English-language versions.