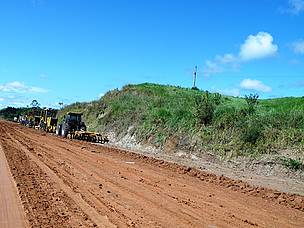 The object of the rural property certification program is to prevent the BR-364 highway paving works to cause a disorderly land occupation in that region.
© WWF-Brasil/Bruno Taitson
Dozens of families get a bonus for joining the rural property certification program, which is supported by WWF-Brazil.  Acre state government also launches an initiative to promote Açaí production and opens a nursery featuring over 700,000 seedlings.

By Bruno Taitson, from Feijó (AC)

June 21 was a special date for Feijó County in Acre. Governor Tião Viana was there to launch the Açaí from Feijó Program, open a nursery which will produce seedlings for the community and make official the payment of bonus to 44 families who joined the rural property certification program.  This initiative is supported by WWF-Brazil and encourages the farmer to make use of modern techniques taught the government’s technical staff, instead of using fire in agricultural production.

According to the governor, projects such as the sustainable rural property certification corroborate Acre’s vocation for development while respecting the forest. “We are improving the income and the quality of living of our population while deforesting just 12% of the state’s vegetation cover”, stated Tião Viana.

Through the project supported by the British Sky TV, WWF-Brazil supports the property certification program in the surroundings of BR-364 highway, between Manoel Urbano and Feijó counties.  The highway is being paved and the works are in the final step.  There are now almost 200 families in the region who have quit their primitive and predatory agriculture practices and have become allies in protecting local ecosystems and biodiversity.

According to Mauro Armelin, WWF-Brazil’s Amazon Program Officer, the policies to promote sustainable production led by the Acre government should become a model to other Amazonian states.  He explains that “WWF-Brazil fully supports such initiatives, which simultaneously achieve targets for social inclusion, increase of family income, and environmental conservation.”

In joining the certification program, the producer takes a commitment to sustainable practices and to not using fire to clear pastures and crops.  He also gets free technical assistance from forest engineers, agronomists and rural assistance technical staff.  The farmer will learn techniques such as use the black mucuna (Mucuna aterrima) woody vine, a leguminous plant which can replace fire and keep the nutrients in the soil, protecting the land from erosion and from the sun rays, as well as fighting the weeds.

The Açaí nursery established along the BR-364 highway is part of a program to encourage fruit production in Feijó.  Its main object is the diversification of income alternatives for the region dwellers.  According to the state Forest Secretary, João Paulo Mastrangelo, starting in December the government wants to give out high quality seedlings to the producers in this region, which main vocation is the Açaí production.

“We are implementing an aggressive policy to encourage sustainable fruit production, aiming particularly at recovering degraded areas, avoiding the itinerant agriculture based on deforestation and fire”, sums up the Secretary.  According to Mastrangelo, Feijó can, in the near future, become one of the largest Açaí production poles in the Amazon region.

Acre State Forest Secretariat’s data point out that Acre presently does not produce sufficient Açaí, not even to supply the domestic market, and less than 20% of the native fruit production potential is harvested.  “The chief strategy is to create a sustainable production basis, strengthening local vocation.  We will recover the altered areas and strengthen the family income”, says Mastrangelo.

The object of the rural property certification program is to prevent the BR-364 highway paving works to cause a disorderly land occupation in that region.
© WWF-Brasil/Bruno Taitson Enlarge 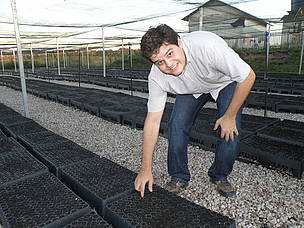